Ultracompetitive Max (Jason Bateman) and Annie (Rachel McAdams) host an annual game night at their suburban home. Regular guests include the laidback Michelle (Kylie Bunbury), her droll husband Kevin (Lamorne Morris) and the rather vacuous, if still good-natured and kind-hearted, Ryan (Billy Magnussen). He always shows up with some random bubble-headed blonde, something the two married couples take great joy in poking fun at him about. That’s what makes Ryan’s date to their latest game night so surprising, the juvenile thirty-something arriving with the smart, witty and altogether way out of his league Sarah (Sharon Horgan) as his companion.

Good thing, because this evening’s competition is going to be unlike any the group has ever played before, so the more strong players the better. All of them have been invited to the home of Max’s smooth-talking, investment banker brother Brooks (Kyle Chandler), and he’s put together something special for them, a true challenge that will see how each of them can communicate and work together as teammates. Brooks has thrown together a murder mystery party and he’s the prospective victim, Max, Annie, Michelle, Kevin, Ryan and Sarah the amateur detectives all in direct competition to solve the crime before the others do.

With the comedy-thriller-romance Game Night, things don’t exactly work out as Max, Annie and their friends expect. Brooks doesn’t get fake kidnapped. Unbeknownst to the entire group he actually gets kidnapped for real, all of them wrongly thinking they’re heading out to partake in an interactive bit of silly intellectual fluff when in all actuality the life and death stakes are quite literal. Screenwriter Mark Perez (Accepted, Herbie Fully Loaded) has engineered a deliciously anarchic scenario that plays out like the haphazard, devil-may-care composite of fellow subversively absurdist comedies like Into the Night, Adventures in Babysitting, Risky Business, After Hours and Date Night, while directors John Francis Daley and Jonathan Goldstein handle all the chaos and calamity with confidence and flair. It’s a heck of a lot of fun, and even if the movie might overstay its welcome, for the most part I had a terrific time sitting in the theatre watching things play out to their ridiculously cheery conclusion.

The nice thing here, and the reason the film works as well as it does, is that Perez has done a fine job of crafting six uniquely appealing characters all of whom are worth spending time with. While the focus is naturally on Max and Annie, thankfully the script doesn’t forget about the other four primary adults. Bunbury, Morris, Magnussen and especially Horgan all get stuff to do, each actor up to the challenge of stealing a choice scene or two. They interact effortlessly with one another, the collective charm they showcase undeniably appealing right from the second all six of them share the screen for the first time.

But the real show-stopping standout is Jesse Plemons. Playing Max and Annie’s freshly divorced, former game night participant next door neighbor Gary, a police officer with an unnerving fondness for his floppy-eared dog, this feels like a breakout moment for the veteran character actor and comedian. He’s an unnerving force of nature, the steadily focused intensity of his stare making me decidedly uncomfortable. Yet Plemons does this in a way that led to a number of steady belly laughs, each line delivery, jerk of the head or raise of an eyebrow causing me to quietly giggle. The physical rigidity of his body movements is something to behold, everything building to a penultimate moment near the end that had me laughing so hard I was fighting back tears.

It can get a little too overly convoluted, and it does take a little while for the screenplay to get to the crux of what is going on and why. There are also madcap side events that transpire, most notably one featuring a blink and you might miss him Danny Huston, because the film needs something zany and weird to happen and for practically no other reason, while a strand involving government witnesses and a secret list of names feels tossed in so the story can provide a McGuffin to trigger Brooks’ kidnapping. I also can’t say the final reveal, which leads to an impromptu car-versus-plane showdown on a secluded tarmac, did much for me, the story coming perilously close to running on fumes by that point of the narrative.

But Bateman and McAdams are a superb comedic pair, the two actors playing off of one another as if they’ve been doing it their whole careers. As for Daley and Goldstein, the confidence they display behind the camera is impressive, and I really liked how they were able to balance all of the different characters, locations and subplots with what appeared to be relative ease. It’s good work, especially with how deftly they utilize a variety of unique, board game-based visuals, this film a serious step in the right direction after their ill-conceived remake of Vacation understandably crashed and burned with critics and audiences alike back in 2015.

Game Night feels like one of those comedies from the 1980s, usually made by Touchstone Pictures, more often than not starring the likes of Bette Midler (Ruthless People, Outrageous Fortune) or Richard Dreyfuss (Stakeout), or even better the both of them (Down and Out in Beverly Hills), and that’s a good thing. While its edges might sometimes be a little rough, the fact the film is so willing to take so many idiosyncratic chances while affably reveling in its R-rating is a thing I happily applaud. That it does so by putting its characters, their relationships and the collective journey front and center before everything else is even more impressive, all of which makes this a gleefully enjoyable comedic contest of murder, mystery and mayhem well worth playing. 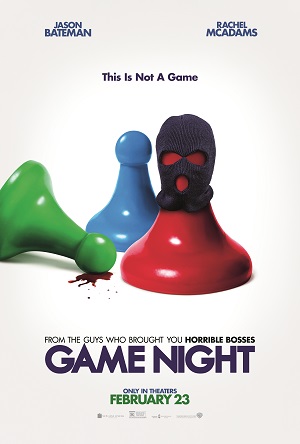