Nancy Stokes (Emma Thompson) is waiting for someone. She’s pacing back and forth in her rather antiseptic hotel room, equal parts dreading and fantasizing about the knock on the door she knows will soon come. Having been widowed for just over two years, the retired religious education teacher has decided to do the unthinkable: she’s hired a young male escort named Leo Grande (Daryl McCormack) to entertain her for a couple of hours, and now that he’s on the verge of arriving, she’s no longer sure about going through with their rendezvous.

Split into four acts, Good Luck to You, Leo Grande begins like a two-character, one-set screwball comedy by way of Howard Hawks or Billy Wilder before building into an incisively emotional, intimately human melodrama à la Tennessee Williams by way of John Cassavetes. It culminates in a witty, cathartic explosion of humility, intimacy, and acceptance that’s decidedly feminine and refreshingly unique, with writer Katy Brand and director Sophie Hyde delivering an introspective sensation that kept me on my toes.

During the first encounter between Nancy and Leo, it’s immediately clear who these characters are. The former is a sexually repressed woman who was handcuffed by a sexually unadventurous marriage and a position of authority she felt forced her to live up to a conservative, upright image. The latter is a confident enigma, a young man who has done such a terrific job of transforming himself into a fantasy of lust and longing that he barely remembers the real person underneath.

While it is apparent how things will progress — she’ll learn to loosen up, discovering aspects of herself as a woman that give her new perspectives on self-empowerment and individual liberties; he’ll reconnect with the person behind the fantasy and learn that he must own up to his actions if he’ll ever find lasting happiness — it’s how the narrative gets there that matters. Brand gives Nancy and Leo agency. She does not ridicule or make either person the butt of any joke.

Instead, Brand allows them to just be. They are real people, laughing at one another’s jokes, poking fun when the moment feels right, and offering comfort and support when it appears it is needed the most. There is an easygoing back-and-forth between Nancy and Leo, one that is seductively comforting yet never mitigates or minimizes the underlying seriousness at the heart of their encounters.

It’s no shock at all, at least not to me, but Hyde does a magnificent job handling all facets of the production. It was clear from her audaciously ambitious narrative debut, 52 Tuesdays, that this director knows her stuff, and that her background in documentary filmmaking gives her a journalistic insight into human nuances that’s continually fascinating. Hyde knows how to get to the truth with sly, dexterous ease, and how she orchestrates Nancy and Leo’s encounters is proof of that.

This is especially clear in the framing of the film as the narrative progresses. Working closely with cinematographer Bryan Mason, who also collaborated with the director on both 52 Tuesdays and Animals, Hyde initially utilizes a formal, almost sitcom-like or pre-Code 1930s visual style to bring Nancy and Leo’s first meeting to life. But in subsequent liaisons, things become far more fluid. The camera begins to dance around them, generating an increasingly frenetic and frazzled atmosphere that’s right in line with Nancy beginning to embrace her sexuality and the repercussions born from this.

Things gain additional focus during the climax, but there is still a lithe, elegantly limber aesthetic to how Hyde and Mason handle things that wasn’t present during that initial meeting. The director lays a series of visual clues as to how everything is going to turn out, and she does it from the first second Nancy is introduced. The audience only realizes this has been the case all along right about the same moment the former teacher inspects herself once again in a hotel mirror, this time with a level of confident understanding that previously did not exist.

Newcomer McCormack is great, exuding so much charismatic machismo that he’s like a Harlequin romance cover model come to life. But there is so much more than that resting behind his eyes, simple truths that came into the light only after Nancy and Leo get back together in ensuing appointments. The young actor is marvelous, and I’m genuinely curious to see what sort of performances he has in store for us.

But this is Thompson’s movie. Stop. End of sentence. The two-time Academy Award winner is spectacular. Thompson was born to play Nancy, which isn’t a surprise, considering that Brand brazenly wrote the character with the actor in mind. It’s what she does with it that’s so mind-blowing. This is a fearlessly raw performance, and Thompson never overplays her hand. I was continually in awe, and I guarantee I’ll be thinking about Nancy and her transformative journey for the rest of 2022.

I can say the same about Good Luck to You, Leo Grande as well. As slight as much of it is, there is something so distinctly personal about what Brand and Hyde are doing that it’s doubtful their sublime little comedy-drama will dissipate from my memory anytime soon. Its sex-positive messaging made a lasting impression, and I’m certain I’ll be far from the only one who ends up feeling the same. 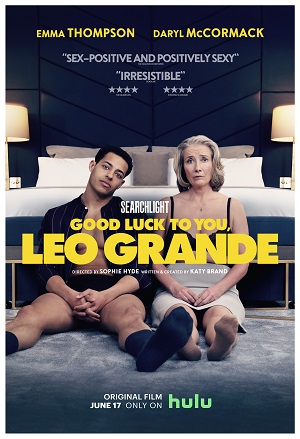