“You never win with violence. You only win when you maintain your dignity.”

Here’s what I wrote about Green Book back in my original theatrical review:

“In 1962 New York night club bouncer Frank Anthony Vallelonga, aka Tony Lip (Viggo Mortensen), finds himself in-between jobs as he waits patiently for the Copacabana to be renovated. It is suggested he go interview with Dr. Don Shirley (Mahershala Ali) for a temporary position as his driver during November and December, the job paying a substantial amount that will keep food on his family’s plates throughout the holidays. To Tony’s surprise Dr. Shirley literally lives above Carnegie Hall in a spacious apartment. Even more of a shock? He’s not a medical doctor but instead a world-renowned classical pianist. He also happens to be Black.

Dr. Shirley needs someone with Tony’s skill set as a fast-talking bouncer more than he actually needs a chauffeur. He’s about to tour the deep South, and having someone along who can take care of themselves, and more importantly him, if trouble were to arise is one of the requirements the record label imposed upon their artist before allowing Dr. Shirley and the other members of his trio (Mike Hatton, Dimiter D. Marinov) to book these concerts. For Tony, a job is a job and he’s more than willing to do what’s asked of him. For Dr. Shirley, he’s never encountered a man as rough around the edges as his new driver and protector proves to be. Unexpectedly, as each mile on the odometer click by the pair ends up forging a rather strong bond, and as their trip nears its end and their time as boss and driver is concluded it’s equally apparent their future as friends has only just begun.

Based on a true story, Green Book is about as gigantically a crowd-pleasing piece of somewhat socially conscious entertainment as anything I’ve seen in quite some time. Magnificently acted by Mortensen and Ali, confidently directed by Peter Farrelly (There’s Something About Mary), there’s a lot to love about this jovial comedy-drama hybrid. At the same time, it’s equally apparent that for all its good intentions and technical excellence this is another story about race and racism in America as seen almost exclusively through the eyes of white man. More, it is one where said white man actually starts teaching his Black employer about his own blackness, and if that’s not a quietly unsettling little trait for this story to possess I’m not altogether certain what else would have been. As enjoyable as this film undeniably proves to be, and as contented and as happy as it made me by the time it came to an end, there was still something of a sour aftertaste left in my mouth once the curtain closed, and as such I’m a little conflicted just how much praise I want to throw this motion picture’s way.

And, make no mistake, I do want to toss plenty of said praise in the film’s general direction. While I have no idea how closely Farrelly, Brian Currie and Nick Vallelonga’s screenplay mirrors the actual events of Tony and Dr. Shirley’s trip, what is here is still pretty darn engaging. Better, it oftentimes feels authentic and real, Farrelly rarely pandering to the audience in overtly sentimental or mawkish ways that could transform this story into a distaff Driving Miss Daisy meets The Help variation. Additionally, Mortensen and Ali are superb. The pair showcase an effortless chemistry that grows in resonance as the story progresses. The two of them are given almost equal screen time and practically even opportunity to make their imprint upon all that is happening. They give themselves over completely to the material and in the process help give the film a lived-in stylishness that’s undeniably captivating.

Then there are the technical facets. Sean Porter’s (Green Room) cinematography is outstanding, the feature always feeling as if it is in motion whether Tony and Dr. Shirley are driving to their next gig or stopping at a roadside diner for a quick bite to eat. Kris Bowers’ (Monsters and Men) exquisite score is also marvelous, as are Betsy Heimann’s (A Walk Among the Tombstones) vibrantly withered and fashionably chic costumes. I also really like the way that editor Patrick J. Don Vito (My Life in Ruins) fashions the various pieces of this story together in a magnetically cohesive whole. Finally, Linda Cardellini delivers a sublime supporting performance as Tony’s wife Dolores, and even though the majority of her scenes or of the talking-on-the-phone or reading-letters-to-the-kids variety she finds a way to ground things with such naturalistic grace I was downright amazed by what she was able to accomplish.

But the truth still remains that I often feels like this story is being told through the wrong person’s eyes. Even though he’s the co-lead, Dr. Shirley stills get the short end of the stray far too frequently, and the scenes where Tony instructs him on the best ways to embrace his cultural identity are awkward and uncomfortably off-putting. There are times Farrelly’s film comes perilously close to being one of those “white savior” dramas from the 1980s or the dreaded “magical negro” fantasies cinema has been obsessed with for far too long, and it’s understandable if some viewers will be so put off by both of those elements that they’ll be unable to embrace the numerous moments of this endeavor that are darn near perfect. Heck, even the “green book” of the title (a travel guide to safe lodging and dining options for African Americans during the era of Jim Crow) is something of a red herring, and I can’t exactly say its importance is ever as substantial or as noteworthy as I think it should have been.

I still like Green Book. Quite a lot, if I’m being honest. If Mortensen finally wins an Academy Award for his performance here I won’t complain. If Ali follows up his own Oscar for Moonlight with a second one for his work as Dr. Shirley I might just stand up and cheer. But the movie, for all its strengths, still isn’t without a few speed bumps. There are elements that just do not work, while others feel as if they’ve been pulled from bygone cinematic eras making some of its observations about race feel regressive. While I can recommend the drama it isn’t without some rather substantial reservations, and as glorious as the blossoming friendship between Tony and Dr. Shirley might be I still can’t help but wish I’d spent more time seeing this world through the latter’s eyes instead of his Caucasian chauffeur’s.”

From this point forward Green Book will always be judged by its Best Picture win at the 91st Academy Awards more than it will be assessed via the weighing of its various strengths and weaknesses. The controversies surrounding the movie, many of which I guessed might happen when I originally wrote my initial review, aren’t going to quiet down anytime soon, and considering just how tone-deaf the film’s creators (most notably director Peter Farrelly and co-screenwriter Nick Vallelonga) have been in their dealing of them it’s starting to feel like this anger, especially on the part of Dr. Shirley’s family, is far more justified than I initially would have surmised it was going to be. None of them are helping matters, and as such a reasonably solid road trip comedy-drama is far more difficult to sit down and enjoy than it otherwise would have been. 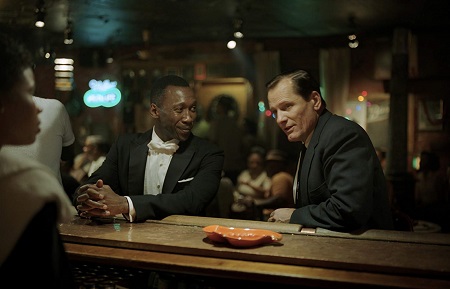 I admit, watching this movie again at home wasn’t as easy I thought it was going to be. I had trouble stopping myself from focusing on all of those missteps and platitudes I mentioned in that original review, and as such even Mortensen and Ali’s Academy Award-nominated performances (the latter winning his second Best Supporting Actor Oscar for his portrayal of Dr. Shirley) didn’t win me over like they did when I watched this one in the theatre. The fact this story isn’t told through Dr. Shirley’s eyes, that it is inherently about a white racist curing his racism by teach his Black employed about his own blackness, all of that just doesn’t sit that well with me.

Do I still think Green Book is worth seeing? Yes, I guess, if only to see two superlative actors at the top of their respective games. But in a year that gave viewers daring, thought-provoking dramas and pieces of pop entertainment like Spike Lee’s Oscar-winning BlacKkKlansman, Blindspotting, The Hate U Give, Black Panther, If Beale Street Could Talk and Sorry to Bother You that Best Picture win isn’t just unfortunate it’s honestly a wee bit silly. It’s as regressive a victory as any a substantial volume of the voting body of the Academy of Motion Picture Arts and Sciences has made in quite some time, and by giving Green Book their highest honor they’ve inadvertently singled the film out for bitterness and ridicule (much of which is warranted; some of which is not) for many decades to come.

It’s difficult not to watch these featurettes with a moderate degree of cynicism. Also, having five minutes on the actual “Green Book” only emphasizes just how substantially the actual movie minimizes that essential piece of American history and in the process does it something of a moderate disservice. But taken for what they are the featurette are all fine and fans of the film will undoubtedly enjoy them.

Green Book will now be forever judged by that Academy Award for Best Picture, and it is likely people will have trouble fairly and evenly discussing the film’s positives and negatives – of which there are plenty on both sides of the equation – because of this. All that said, the movie is still worthy of a look, if only for the magnificent performances from both Viggo Mortensen and Mahershala Ali. As for Universal’s 4K Ultra HD presentation of the Oscar-winning, it’s pretty much perfect from a technical standpoint, making this release a quality one even if the motion picture it’s showcasing is decidedly uneven to say the least. 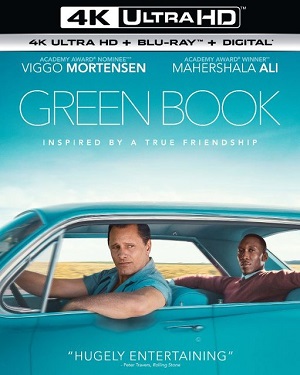