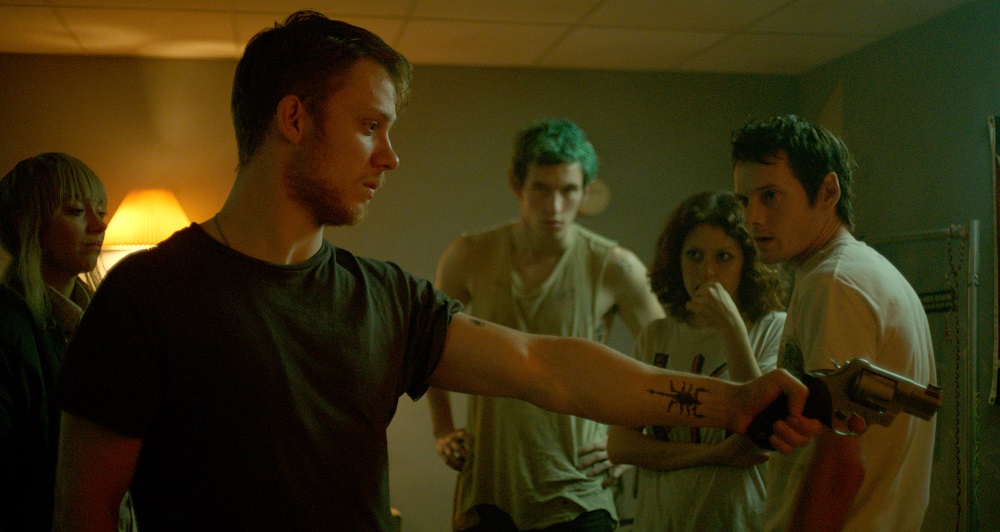 Traveling punk rockers The Ain’t Rights have seen better days. A scheduled gig in Portland has gone the way of the dodo, making them question whether or not it’s in the band’s best interest to continue their U.S. tour. With no spending money to speak of left, their dilapidated van on its last legs, collectively they make the decision to accept an impromptu gig playing in front of an audience of skinheads deep in the heart of the Pacific Northwest wilderness. 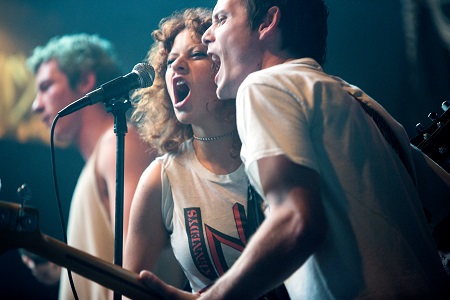 After their initial number, a gag cover of Dead Kennedy’s “Nazi Punks, F**k Off,” goes over like an expected lead balloon, the remainder of their performance is spectacularly successful, and after collecting their pay from venue manager Gabe (Macon Blair) The Ain’t Rights are ready to hit the road for home. Things take a turn into the deadly, however, when bassist Pat (Anton Yelchin) accidentally stumbles upon a dead body in the artist green room, he and the rest of his band mates, guitarist Sam (Alia Shawkat), drummer Reece (Joe Cole) and vocalist Tiger (Callum Turner), forced to remain on-site at the club until the police can be called in to investigate.

But Amber (Imogen Poots), a young woman who witnessed her former friend’s death, isn’t so certain law enforcement is on their way. She’s fairly certain they’re all in mortal danger, Darcy Banker (Patrick Stewart), the man who owns all the land for miles around and a dedicated Nazi and anarchist, not one to let something as trivial as murder stand in the way of his achieving any of his end goals. The Ain’t Rights, along with Amber, are all now standing in his way, and while none of them meant to fall into this particular pit of tragedy and bloodshed that doesn’t mean he can allow any witnesses to talk about any of what they’ve seen, either.

Green Room is writer/director Jeremy Saulnier’s explosive, gut-wrenching follow-up to 2014’s masterful Blue Ruin. Like that movie, the filmmaker takes a relatively simple genre idea and then runs with it into wildly imaginative locations that are beguiling in their familiarity yet also shocking in their anarchic idiosyncrasies. This movie, one part horror, one part thriller, one part brutally bleak black comedy of errors, is like some sort of cinematic Gordian Knot of death and destruction. Survival is a continual question mark, one that drives the members of The Ain’t Rights to increasingly drastic extremes, Pat, Sam and all of the others finding they’re capable of just about anything if it means living through the night.

This is a nasty thriller, and I mean that as a compliment. Saulnier throws his characters right into the middle of chaos with the type of subtle grace that sneaks up on you until it’s almost too late, forcing the viewer to feel the growing disbelief and terror the punk rockers are experiencing right alongside next to them. This group of rebels, so good at acting like they’re confronting the system, don’t actually know what anarchy is until they’re forced to suffer through it firsthand. Now, stuck inside the green room, waiting to discover what Darcy has in store for the lot of them, the emotional paranoia is all-encompassing, and long before the first machete is drawn and that initial drop of blood hits the floor the terror gnawing away at my insides was growing like a malignant tumor way beyond being treatable.

Darcy is a corrosively hypnotic villain, and Stewart portrays him with a slyly disquieting virtuosity that’s spellbinding. This is a methodical man, a person who sees a justification for every move they make no matter how heinous or repugnant they might appear to some. This is a character who is light years away from Prof. Charles Xavier or Captain Jean-Luc Picard yet at the same time is someone who holds his own, deeply abhorrent beliefs as near and as dear to his hearts as either of those iconic heroes ever did. Stewart portrays Darcy with the same type  of conviction he brought to his more steadfast, morally incorruptible roles, in the process painting a figure of pure, unadulterated evil that’s absolutely devastating. 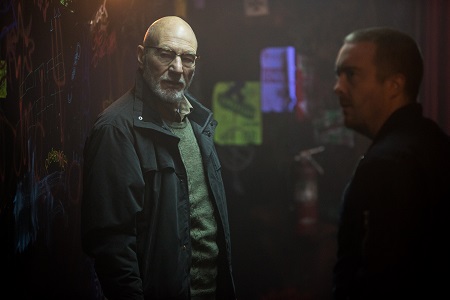 Saulnier’s adrenaline-fueled pulse-pounder can’t help but recall both John Carpenter’s Assault on Precinct 13 and Howard Hawks’ Rio Bravo. But it also has the energy and the unsettling aura of a litany of thrillers ranging from Sam Raimi’s The Evil Dead, to John McTiernan’s Die Hard, with healthy dollops of Tim Hunter’s River’s Edge, Sam Peckinpah’s Straw Dogs and William Castle’s House on Haunted Hill sprinkled throughout. At the same time, there is a uniquely waiflike quality to this thriller that is happily grotesque, a unique evanescence that builds in intensity as The Ain’t Rights and Amber pull out all the stops in their attempt to survive. Saulnier orchestrates things with a form of psychological and physical intensity bordering on the supernatural, and while the violence can get extreme he never loses sight of the human tragedy agonizingly battering his five, increasingly inconsolable heroes.

Green Room isn’t a transcendent masterpiece that transcends its genre roots. It doesn’t change the conversation in ways anyone will likely be waxing poetic about for decades to come. Saulnier’s third feature behind the camera is just damn fine cinema, nothing more, and certainly nothing less, its go-for-broke horror aesthetic a real world cavalcade of terror  that had me noticeably shaking long after the film itself had come to an end. 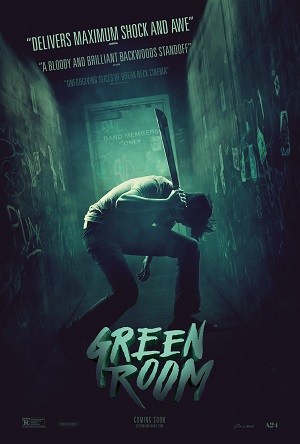