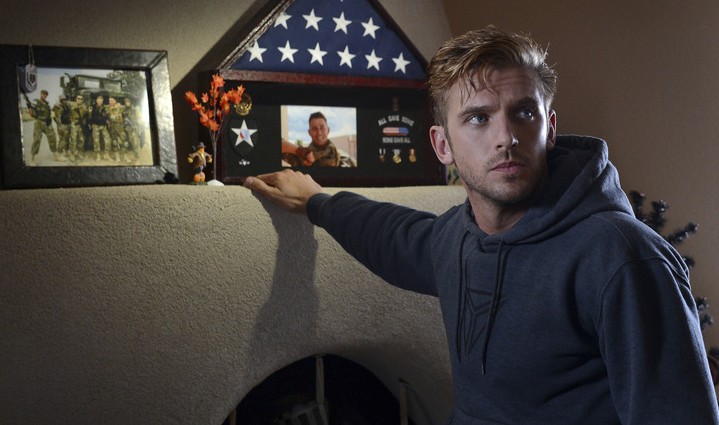 David (Dan Stevens) has come to the Peterson home to pay his respects. He served with their eldest son Caleb, was there when he died, and as such made a promise to his friend to let both his parents and two siblings know he was thinking of them and only them as he made the ultimate sacrifice. He’s charismatic, charming, intelligent and polite, and for grieving mom Laura (Sheila Kelley), alcoholic dad Spencer (Leland Orser), teenage daughter Anna (Maika Monroe) and wide-eyed youngest Luke (Brendan Meyer) he’s potentially a breath of fresh air that could reunite their struggling clan and make them a loving familial unit once again.

Or is he? David is driven, and it’s obvious he does in fact care for his ex-comrade’s family, but his methods? Those are not entirely above board. He’s as quick with a fist as he is with a crooked smile, adept at both firing off compliments and firearms seemingly at the exact same time. While he appears to have the Peterson’s best interests at heart, there is something amiss about both his past as well as his reasons for giving them a helping hand, Anna in particular starting to realize there’s more to David than he’s willing to talk about.

Much like the pair’s stunning, wildly entertaining You’re Next, less is more where it comes to director Adam Wingard and writer Simon Barrett’s borderline brilliant thriller, The Guest. Don’t ask about the plot twists. Don’t watch the trailers. Don’t dissect any reviews – including this one – too closely. Let the film’s absurdly convoluted meanderings, all character-driven, all in service to the overall plot, wash over you without any foreknowledge of what is about to unfold, nothing done just for the sake of doing something unexpected or different. See how David and Anna relate to one another and engage in their impromptu chess match not having a clue as to how things will turn out or which one of them will end up making the most important moves. 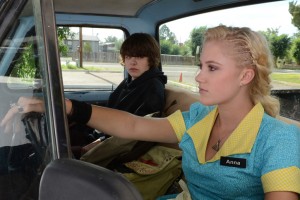 Barrett and Wingard toy with the audience, but never insult them, even the most jaw-dropping twists coming from a place of authenticity and truth, making the horror and chaos to come more affecting in the process. The shock and awe of the unanticipated mess is extreme, yet the emotional center of the story being told remains strong throughout, and as such, staying invested in the Petersons and their plight is easy to do. The pair does not beat around the bush and they do not pull their punches, yet at the same time they mostly eschew reveling in the more exploitive and disturbing aspects of all that is taking place.

None of which would matter if Stevens (known for his prim and proper turn as Matthew Crawley in BBC’s “Downton Abbey” more than he is for anything else) wasn’t so darn amazing as David. He’s criminally charismatic, charming in ways that send chills down your spine, giving a complex, multifaceted performance as he brings this violence-inclined Good Samaritan to life. I couldn’t take my eyes off of him at any point, a late scene between him and Kelley sitting right on the knife’s edge of tension, tragedy and love as he navigates between what he feels must be done in order to survive and what he’d rather do as a wannabe member of the Peterson family.

He’s nearly matched by Monroe. Between this, At Any Price and Labor Day, the young actress is quickly proving herself to be a multifaceted scene-stealer of the first degree. She’s not only the one who has to put the pieces of David’s story together, but also the person who must figure out the best course of action when she comes to the conclusion his presence isn’t nearly as benign or as selfless as it might on the surface appear. She has to face him down, maybe even out think him, engaging in a match of wits and wills she knows she shouldn’t be a part of, yet not shying from the challenge, even if she desperately would like to. Monroe makes this inner turmoil palpable and heartrending, leading to a final exclamation so pitch perfect, yet so darkly hilarious, I found myself wanting to leap from my theatre seat and cheer.

I could say so much more, but I find myself reticent to do so. Much like You’re Next, Barrett and Wingard have once again assembled together a thriller filled with deft bits of homage to a litany of classics. At the same time, name-dropping a single one of them would ruin many of the inherent surprises subtly buried within the narrative’s numerous strands. As filmmakers they are growing in leaps and bounds, the gleefully subversive and monstrously entertaining The Guest showcasing both at the peak of their respective powers, the finished movie likely one of the best I’ll have the pleasure to watch in all of 2014. 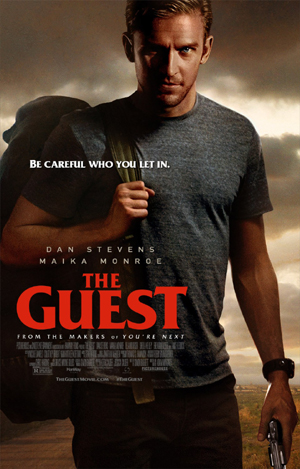