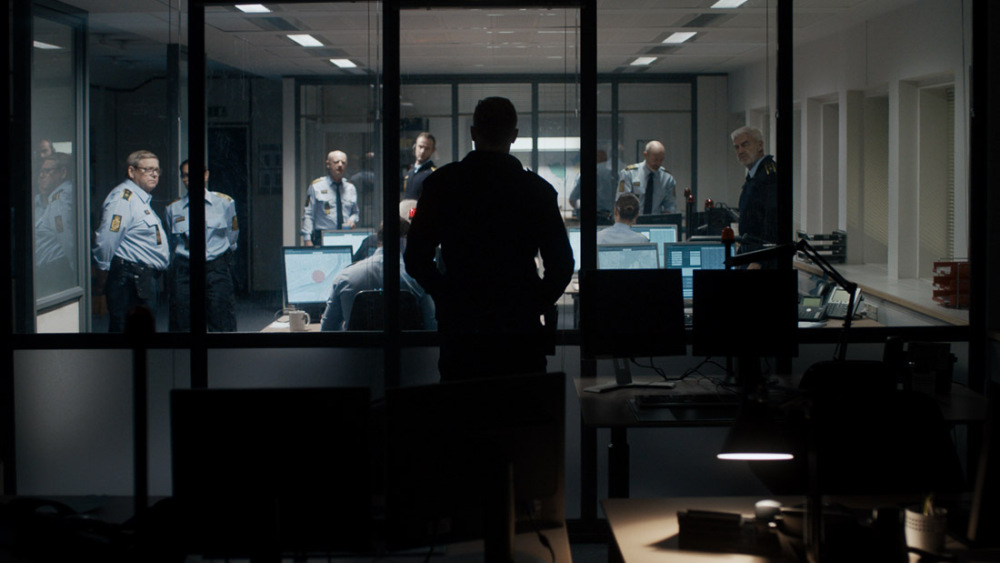 On desk duty until an investigation into one of his prior cases reaches a conclusion, veteran police officer Asger Holm (Jakob Cedergren) is doing his best to get through the remaining hours of his shift covering the Emergency Services phone line. But with his day drawing to a close and the strong likelihood he’ll be returned to active duty in the morning, the seasoned investigator receives a call that forces him to reevaluate everything he thought he knew about law enforcement. A woman, pretending to be speaking with her six-year-old daughter, has called Emergency Services to let the police know she’s been kidnapped and is deathly afraid for her life, only giving Asger the most basic and nondescript information about her whereabouts and who has her before being forced to hang up the phone. 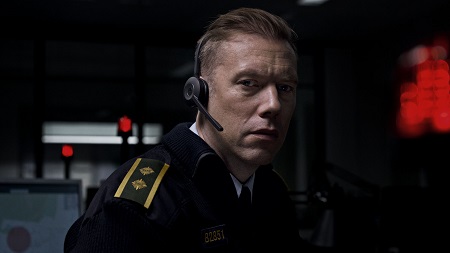 Putting back on his detective hat, the police officer is determined to figure out who this woman is, who it is that has her and the location of their final destination. Asger begins to look at this case as a way for him redeem himself for past mistakes, even going so far as to promise to the woman’s daughter he’ll make sure her mother comes back alive even though any outcome, let alone that one, is far outside his personal control. Trapped in the Emergency Services call center, the officer attempts to put the pieces of this abduction puzzle together utilizing the only weapon he has at his disposal: the phone. But as Asger helps outside units close in on the woman and her abductor he also begins to question whether or not he’s let his emotions get the better of him, wondering if he’s doing more harm than good by being so proactive in going beyond the call of duty his present job at Emergency Services typically calls for.

Denmark’s official submission for the Best Foreign Language Film Academy Award, director Gustav Möller’s lean, mean psychological thriller The Guilty is perfect. Featuring a sensational lead performance from Cedergren, this intimate marvel is a suspense-filled shocker that builds to an explosively emotional climax that had me choking back tears as it delivered one gut-wrenching punch to the stomach after another. Taking place entirely inside the Emergency Services call center and with only minimal input from the supporting cast, this is as focused and as meticulously plotted a real-time thriller as any I’ve ever seen, at least since Steven Knight’s 2013 Tom Hardy gem Locke. Make no mistake, this is one of 2018’s best motion pictures.

It’s entirely self-contained with only one primary set with two separate rooms. The first is the larger call center where Asger first receives the initial cry for help. The second is a smaller office where Emergency Services officers can take any of the more challenging calls in relative seclusion. Möller transitions between each room with kinetic efficiency, cinematographer Jasper J. Spanning’s camerawork achieving an effortlessly elegant dynamism that only amplifies the emotional upheavals Asger is forced to deal with whether he wants to or not. The film is also edited by Carla Luffe as if the entire drama were resting on the edge of a freshly sharpened knife, tension ratcheting up bit by bit as events steamroll towards their inherently devastating conclusion.

Cedergren is magnificent. With only a small handful of other officers in the call center, the actor spends most of his time either interacting with others over the phone or sitting in the office alone as he aggressively tries to figure out what he needs to do next in order to ensure this woman survives the night and he can keep his promise to her child. Cedergren does a superb job of letting his internalized emotions burst forth little by little as he learns more about what is going on and gets closer to helping facilitate this kidnapped caller’s escape. It’s a wonderful bit of creative dexterity, the pure physicality of what he’s called on to accomplish far more difficult than it might initially appear. It all builds to a moment of profound, unfiltered honesty that is both heroic and damning all in the same breath, watching Cedergren during this moment leaving me more than a bit shell-shocked by the time it came to an end.

Ultimately, The Guilty isn’t the suspense-thriller a viewer might imagine it is going to be. Sure it is tense, and without question the central conceit of an Emergency Services phone operator working against time to help facilitate the rescue of a kidnapped woman is unnerving. But as great as all of that might be, and it is magnificent, Möller and his co-writer Emil Nygaard Albertsen have crafted something much more intimate, far more human than I anticipated. It asks tough questions about right and wrong that straddle the line between good and evil with heartrending clarity, and no matter how selflessly pure the act innocence and guilt still mix via an uneasy symbiotic relationship with neither attribute able to exist without the companionship of its polar opposite sibling. 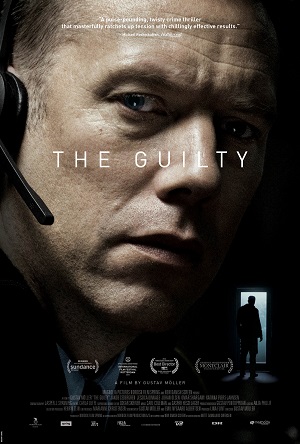