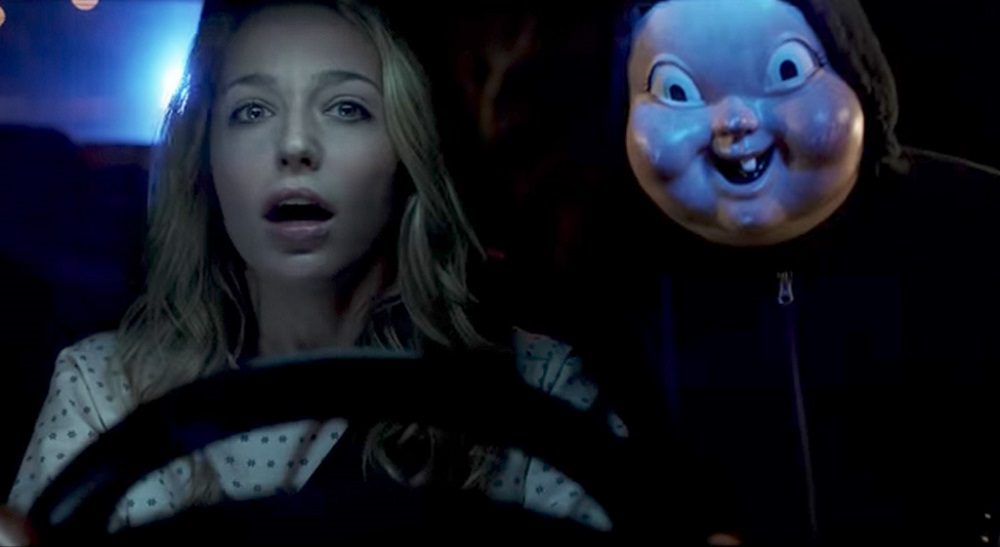 Socialite and sorority firebrand Tree Gelbman (Jessica Rothe) hates her birthday. So much so she’s stopped speaking to her father, does everything she can to keep the date a secret and typically spends the night before descending into a drunken stupor so maybe she’ll be too hung-over the next day to even get out of bed. None of which explains why her phone’s ringtone is now set to an obnoxious “It’s your birthday!” message. Or why her bubbly sorority sister roommate Lori (Ruby Modine) has baked her a cupcake from scratch. Or how she starts her morning in the dorm room of the friendly Carter (Israel Broussard) with no clue how she ended up there, forced to walk back to the sorority house in the prior night’s clothes in order to change and make it to her first class on time. 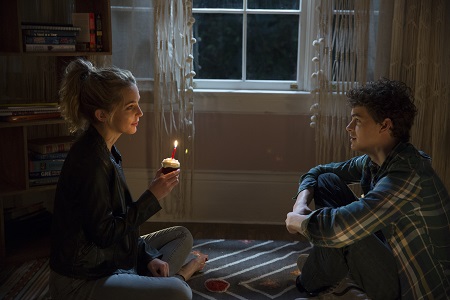 But none of this prepares Tree for what is going to happen later that night. Someone is going to murder her, wearing the deformed plastic mask molded into the grinning face of their school’s porcine mascot. Yet death is only the beginning for Tree. She wakes up back in Carter’s dorm room, her phone ringing its birthday message with a walk of shame back to the sorority house certain to follow. The college coed is apparently cursed to live through her birthday over and over again, each morning beginning the same and each night building to the moment a masked killer finds a new way to end her life. Yet, as crazy as all of this is, Tree does realize there’s an opportunity here to solve her own murder, and in doing so potentially live long enough to see a tomorrow she’s starting to believe will never, ever come.

The year’s second Groundhog Day variation, the high school-set Mean Girls variation Before I Fall being the other, Happy Death Day is an exuberantly plotted, surprisingly funny piece of pop entertainment that takes the slasher film and playfully spins it around like a blood-soaked top. Director Christopher Landon (Scouts Guide to the Zombie Apocalypse) takes Scott Lobdell’s (Man of the House) gleefully silly script and has a grand time making something obnoxiously witty out of it. While maybe a bit more convoluted than it needs to be, potentially overstaying its welcome a tiny bit thanks to the need to toss in an extra a surprise or two for no real reason other than it can, nonetheless this film is an absolute blast that’s remarkably difficult to dislike. I think I loved it, and it’s safe to say I almost can’t wait to see this comedic horror yarn for a second time at the earliest possible opportunity.

The strength of the movie is its focus. Landon and Lobdell smartly keep Tree right at the center of the action, the entire story seen through her eyes. More importantly, they do not ogle to the character, do not try to make her some sort of bitchy caricature of a sorority queen bee but instead cagily craft a complicated character who changes and evolves over the course of this never-ending day. Tree honestly looks at herself in this mirror and comes to grips with the young woman she’s allowed herself to become, using the shadow of past tragedy involving her mother three years prior as an excuse to transform into a person entirely unlike the adolescent and teenager she used to be. It’s unexpectedly heartfelt and poignant, this examination, Lobdell’s script craftily morphing in a multitude of ways, all of them having everything to do with Tree, the way she looks at the world and how she learns to view it anew with fresh eyes each time she dies. 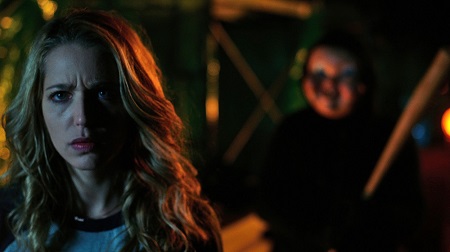 In virtually every scene, Rothe is terrific. A relative newcomer who can be seen in relatively minor, if still significant, roles in films as varied as La La Land and Wolves, the young actress is tasked do to do all of the emotional heavy-lifting. Tree has to go from mean girl to reformed girl to final girl throughout the course of the narrative, everything building to the moment where she unmasks her killer and hopefully finds a way to turn the tables, thus ending the nightmare she’s been mysteriously a part of. Rothe takes to the spotlight instantly, and even when things descend into campy implausibility, her performance is so rich, so bewitching, she could be have been doing handstands while reciting the alphabet backward and I’d likely still have adored every single second what it was she was doing.

While no Groundhog Day or Edge of Tomorrow, this does not make Happy Death Day any less fun. A colorful, exuberantly energetic riff on everything from Scream to Happy Birthday to Me to Let’s Scare Jessica to Death to Halloween to Black Christmas, Landon’s latest is a crisply intoxicating lark that’s a bloody good time. One of 2017’s most unforeseen gems, this freewheeling bit of slasher craziness is an amusing genre miracle worth celebrating. 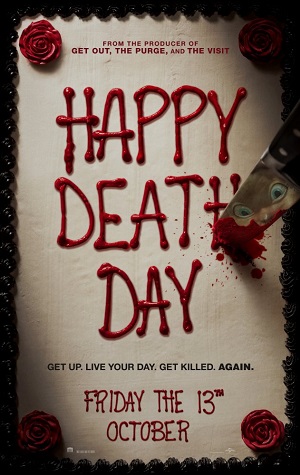