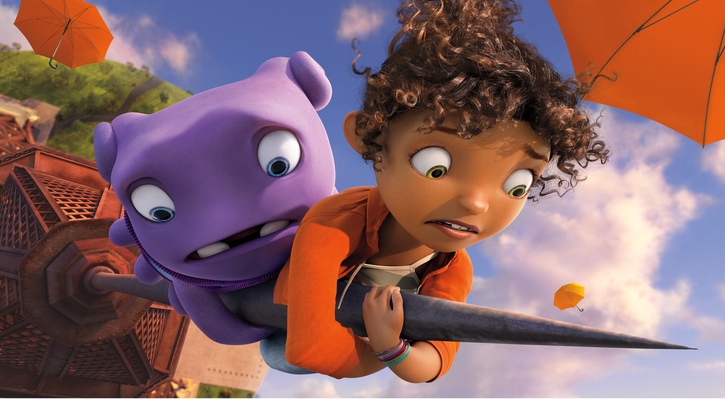 Heartwarming Home Not Quite Out of This World

Captain Smek (voiced by Steve Martin) has led the happily timid, exuberantly hive-minded Boov to Earth, fleeing from their own home world, trying to escape their always in pursuit arch enemies the planet-gobbling Gorg. Taking over with what they perceive as kindness, they displace all of humanity to Australia, claiming the remainder of the planet for themselves, quite certain the indigenous species isn’t as progressive or as evolved as their own. 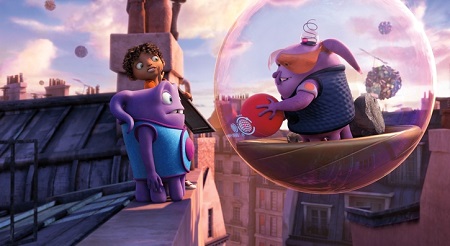 Oh (Jim Parsons) doesn’t fit in. He’s outgoing, opinionated and longs for things the Boov don’t understand, let alone have – friendship and family. After he makes a ruinous mistake and is forced to become a fugitive, he ends up encountering human Gratuity ‘Tip’ Tucci (Rihanna), a little girl who somehow managed to remain in New York after everyone else in the city, including her Mom (Jennifer Lopez), had been abducted to the other side of the globe. Together, the two of them circumnavigate the planet discovering truths about themselves, their respective species, and the nature of communication and family they never could have learned without the other by their side.

DreamWorks Animation’s latest Home, adapted from Adam Rex‘s children’s novel The True Meaning of Smekday, is an incredibly slight affair. In the grand scheme of things not a lot happens, the movie rather straightforward as far as its narrative progression is concerned. More than that, there isn’t a ton of urgency, and even though Oh and Tip are fugitives on the run, it never really feels like there’s a heck of a lot of pressure on those pursuing them to see the two captured.

Be that as it may, I find the computer-animated feature incredibly difficult to dislike. The relationship between the constantly color-shifting Oh and the cutely gung-ho Tip is beautifully handled, the pair’s dynamic as they slowly become friends consistently winning. They are the engine this whole thing runs upon and as such director Tim Johnson (Over the Hedge) and screenwriters Tom J. Astle (Epic) and Matt Ember (Get Smart) rightly keep the focus on them throughout. They’re also wonderfully voiced by both Parsons and Rihanna, the duo generating a believable give and take that suits each of their characters nicely. 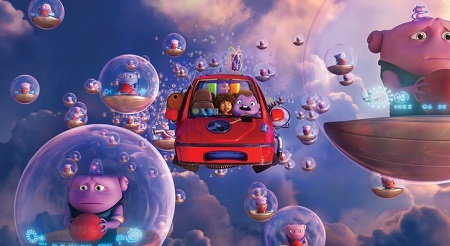 But the movie as a whole is inconsequential as they come. The outside threat from the Gorg is practically nonexistent; why they are so obsessed with the Boov not exactly surprising. The filmmakers also do nothing, virtually nothing at all, with Captain Smek, making one wonder what interested Martin in coming aboard to voice him if they weren’t going to allow him to cut loose in any noticeable sort of way. There are also moments where the whole thing feels frustratingly padded, moments where the film is nothing more than a snazzy looking animated music video celebrating the latest releases of its two famous pop superstars voicing major characters.

There isn’t a heck of a lot more to say. Little kids are undoubtedly going to enjoy it, and, for my part at least, I can’t imagine parents are going to even moderately despise the 90 minutes required to watch it sitting there next to them. But it isn’t like this is a movie anyone is going to be talking about afterwards, and it’s not like there aren’t better options – Cinderella and Paddington both come to mind – still playing at the local multiplex. Still, Home is hardly a disaster, and while it didn’t steal my heart, it certainly kept it warm enough that I was hardly displeased walking out of the theater after it had come to an end. 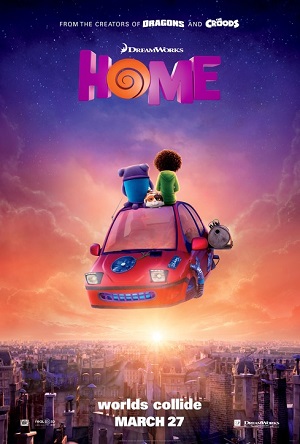