Imaginatively Gory House a Horror Haunt Not Worth Visiting

A team of kidnappers, led by the aggressively determined Hazel (Sharni Vinson), plan and execute the abduction of heiress Katherine (Carlyn Burchell), setting themselves up for a major payday. But calls to the young woman’s father go continually unanswered, and as such Ade (Steven John Ward) and James (Gustav Gerdener) are tasked with heading to the family’s Willow Street home to see what’s going on. What they discover is terror beyond imagining, sights and sounds that defy all belief. 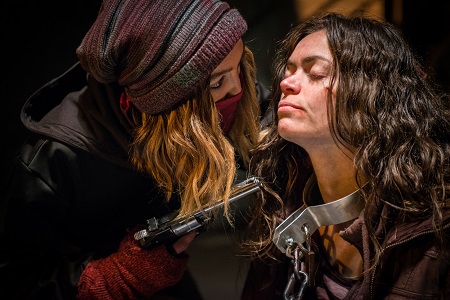 As that pair’s gruesome adventure begins to unfold, Hazel and her remaining partner in crime Mark (Zino Ventura) aren’t having an easier a time back at their secret secluded industrial factory hideout. They start seeing visions of tragedies and traumas past, images that startle and shock to them to the point they begin to question the line between fantasy and reality. With things getting more disturbing by the second, it becomes increasingly clear that Katherine might not be all she appears to be, the not-so-innocent youngster harboring a demonic secret that could spell doom for, not just her four kidnappers, but also for humankind as a whole.

South African horror entry House on Willow Street offers up some inspired creature designs as well as unsettling bits of carnage and gore deserving of praise. It also features, in Vinson and Burchell, a pair of young actresses making the most of the material that’s been handed them, each giving robust, aggressively assertive performances that fit their respective characters nicely. But Kate Blackman’s story and Jonathan Jordaan and director Alastair Orr’s (Indigenous) screenplay is a threadbare shell of an idea that never develops in a way that is lasting or meaningful. The movie, for all its visual flair, just isn’t particularly memorable, and in the end watching it turns out to be something a minor genre letdown that’s moderately disappointing.

I do appreciate the fact that Orr and company attempt to hit the ground running, not spending an inordinate amount of time setting things up or going into everyone’s differing back stories. It’s immediately obvious that Hazel and her team all have their reasons for agreeing to leap into this kidnapping without as much prep times as a crime like this would typically require, while Katherine’s mental and physical devolution happens with suitably tense efficiency. Ade and James’ return to the Willow Street house to see if they can figure out what is going on is also beautifully staged, the discoveries they make while there undeniably gruesome.

But there is no real character development, and the only reason Hazel ends up making an impression is entirely due to Vinson’s controlled, emotionally feral performance. While not up to the standards set by her turn in Adam Wingard’s You’re Next, this is another reminder that the actress is far more of a multifaceted talent than the majority of roles that keep being offered her would lead some to initially believe. Vinson knows how to take this woman and transform her from erstwhile villain to potential antihero with striking specificity, the complexity of her portrayal rather striking especially considering where all this supernatural madness is speedily careening to.

Unfortunately, the three men who are initially assisting her do not do the same. Ward is rather bland all things considered (Ade is Hazel’s second-in-command), while Gerdener and Ventura look the part of the rugged ruffian yet aren’t given near enough to do to make anything resembling a substantive impression. Ultimately, the trio’s only reasons for being here appears to be cannon fodder for all the psychological butchery, each around to meet various creatures of the id that will assist in their potential possession and journey to the soul-sucking dark side. 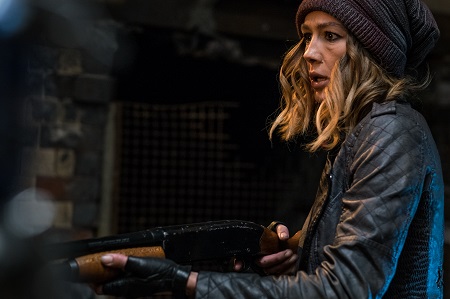 Burchell also doesn’t have much to do save to initially warn her captors they need to let her go before giving herself over to fully into demonic manipulations of those around her in all its Pazuzu-like glory. Even so, the actress remains compelling, doing a reasonably nice job of reveling in the festering evil taking root inside of her. More importantly, she and Vinson manage to share a couple of wonderful little moments, one early on and then its sinister mirror image near the climax, that I quite enjoyed, and it’s hard not to imagine what might have been had Orr, Jordaan and Blackman developed things for the characters in greater detail then they sadly do.

It’s all sounds and fury, an Evil Dead meets The Exorcist meets Almost Human like hodgepodge of visual effect and creatively gory makeup prosthetics that are laid upon a solid enough foundation to make all the theatrics worthy of becoming emotionally invested in. While technically proficient, overall House on Willow Street is much ado about nothing, making it another piece of low budget genre fiction hard to get excited about and even more difficult to recommend. 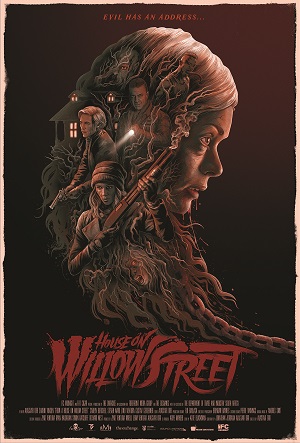