Inspiring Plague an Awesome Tale of Heroism Under Fire

As an award-winning journalist, David France has been covering the AIDS crisis for 30 years. His work in LGBT community papers, The New York Times, Newsweek, GQ and New York magazine has spoken proudly for itself for over three decades. His connection to people of varying genders, races and backgrounds and their respective stories one of a kind.

It only makes sense that his documentary debut How to Survive a Plague is maybe the definitive chronicle of both this epidemic and the grassroots community organizations that blossomed across the country in response to it. This is the story of the fight against AIDS and a saga of political, social, corporate and public indifference. It is the story of a group of activists who knew there was a problem but hadn’t a clue what to do first, knowing only that their first step had to be taken immediately or any chance to have previously silent voices heard might be lost forever.

That might be a bit of hyperbole on my part, but not by much. France looks at the rise of organizations like ACT UP out of New York’s Greenwich Village with a clear eye and free of a heavy hand, using copious amounts of source material – videos, news footage, photos, news clippings, etc. – to tell his tale. He lets the voices of those involved in the fight speak for themselves, everything propelling forward with kinetically enthralling majesty. The documentary becomes something of a real-world ticking-clock political thriller à la Argo or All the President’s Men, the whole thing a mesmerizing descent down the rabbit hole that would be unbelievable if it wasn’t 100% true.

Everything is here. Playwright Larry Kramer’s incendiary speech which led to the birth of ACT UP. The first appearance of the pink triangle coupled with the slogan, “Silence = Death.” The approval of AZT by the FDA and its subsequent release, the most expensive drug ever to hit the open market. President Ronald Reagan labeling the disease, “Public Enemy No. 1,” but only after 20,000 Americans had died. Teenage activist Ryan White’s death from AIDS at the age of 18. The formation of the Treatment Action Group (TAG) in 1992. Magic Johnson’s stunning announcement that he was/is HIV-positive.

France weaves all of this material together brilliantly, and hearing the voices of those who were there on the ground floor when it all happened is staggering. More so is the haunting, emotionally powerful coda when the surviving members of this fight who we’ve been following for the entire film finally make an appearance, seeing them now awesomely impactful and left me visibly moved. How to Survive a Plague is sensational, and without a doubt France’s debut is one of the more profoundly inspiring motion pictures I’ve seen this year. 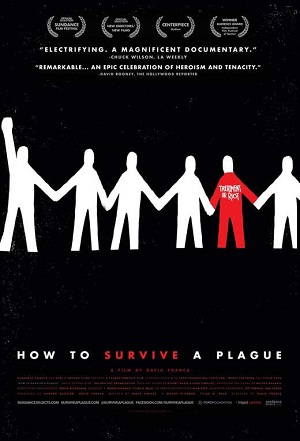