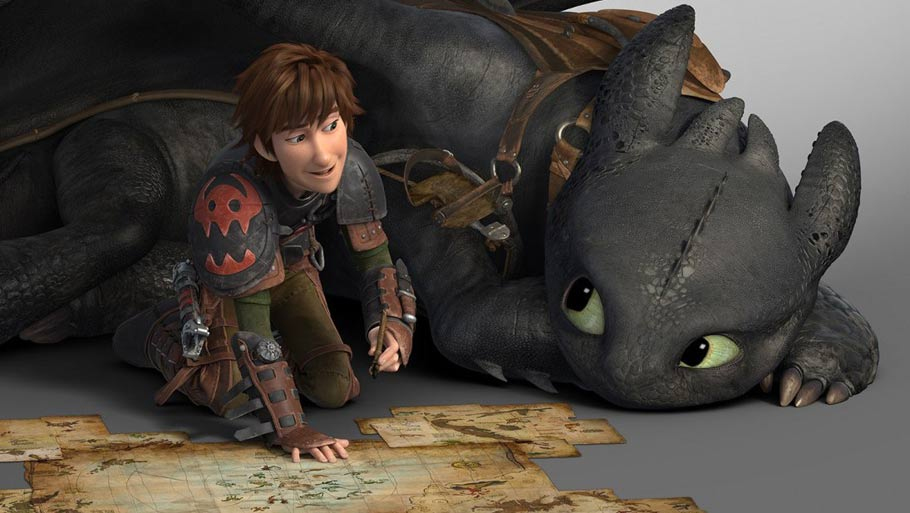 A lot has happened in the five years since young Hiccup (voiced by Jay Baruchel) proved to the initially incredulous citizens of his Viking town of Berk that dragons were not the terrifying menace had always believed. Now everyone has one by their side, their whole society re-engineered to facilitate their care, upkeep, happiness and survival.

All of this has tribal chief Stoick the Vast (Gerard Butler) looking to the future, the valiant Viking increasingly ready to turn the reins of leadership over to his son Hiccup. Not that the young man wants to be chief. He’d rather continue to soar through the heavens with his beloved Toothless, mapping out the surrounding lands believing he’s the first Berk resident to do so. But when he discovers a massive cave of ice concealing a world of dragons he’d never could have imagined beforehand all bets are off, especially when learns the mysterious Dragon Rider who protects this world is none other than his mother Valka (Cate Blanchett), long thought dead these past 20 years.

How to Train Your Dragon 2 builds and expands upon the themes and ideas presented in the sensational 2010 first film, opening things up in a multitude of refreshing and unexpected ways. It continues Hiccup’s transformational journey, having him experience the pains of loss and the stings of regret while also coming to terms with the mantle of leadership placed before him in the process finding an inner courage he didn’t know was there. The movie keeps character central to the proceedings throughout never losing sight of the bigger picture, and while visuals are even more impressively breathtaking this time than they were the first go-around – a major feat indeed – razzle-dazzle rarely overwhelms the nuanced nature of the storytelling.

And is said storytelling ever terrific. The central conflicts might be between Hiccup, Valka and a marauding, dragon-obsessed villain named Drago (Djimon Hounsou), but the real story continues to be a familial one, Stoick’s relationship with his son the central crux all else revolves around. This time it is the reappearance of his long-lost wife that makes his heart skip a beat, their reunion a blissful, heartfelt aria of tragedy, reconciliation and undying love that brought a quiet tear to my eye. The reconstituted family communicates one to the other with striking honesty, and while they don’t always completely understand or comprehend what it is the other is trying to tell them their selfless resolve to figure it out while sticking together is pleasingly undeniable.

Returning writer/director Dean DeBlois (Lilo & Stitch) continues to showcase a steady, confident hand as he explores the world initially introduced in author Cressida Cowell’s award-winning children’s books. Some will argue his sequel is light on action, taking far too much time to get to the bigger set pieces, but to my mind that’s a very good thing indeed. He doesn’t feel the need to rush, to throw crazy wild visuals at the screen just because he can. The filmmaker trusts the audience, believes they’ll be more invested in the outcome of the characters and their respective plights if they are more fully developed and relatable than family-friendly pictures of this type usually allow for.

Not that everything works. As straightforward as the narrative arc at the center of everything might be, the sequel is a little overstuffed with subplots, some of the secondary characters, most notably Hiccup’s heroic cherub of a girlfriend Astrid (America Ferrera), given a slightly shorter shrift than they deserve. New characters like dragon poacher Eret son of Eret (Kit Harington) are intriguingly introduced only to subsequently be given precious little to do, while how exactly Drago has gained control of the power that has allowed him to amass his gigantic dragon army is never entirely clear.

No matter. Themes of family, friendship, sacrifice and loyalty are clear throughout, everything building to a rousing conclusion that had my preview audience practically on their feet in expectant excitement. The dragon hierarchy is more clearly developed and defined, everything building to a revelation reminding viewers overall size doesn’t always matter, strength of heart and the courage to believe in others where most might not the egg from which true leaders are oftentimes hatched from.

How to Train Your Dragon 2 does what all the best second cinematic chapters have done, exploring ideas and concepts found within the first story but doing so in ways that broaden their scope while making them more concrete, electrifying and real in the process. DeBlois has woven an exceedingly rich tapestry, composing a fantastic adventure young and old alike will revel in and enjoy. Make no mistake, this sequel doesn’t just soar, it breathes a ferocious fire the rousing heat of which will be felt throughout the remainder of 2014. 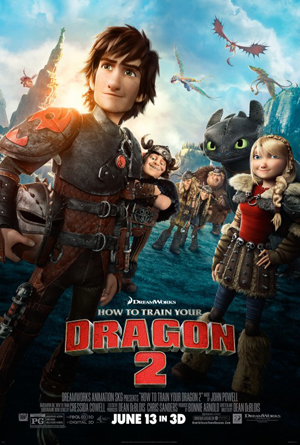