Pointless Adventures of Buck Wild an Uninspired Waste of Time

The Ice Age adventures have always been hit-and-miss, with 2002’s first film and 2009’s Ice Age: Dawn of the Dinosaurs arguably the best of the five features making up this popular franchise. As forgettable as some installments have been (I can’t for a moment recollect what happens in 2006’s Ice Age: The Meltdown), none have been outright terrible. Heck, thanks to brief comedic interstitials featuring the ongoing antics of squirrel-rat hybrid Scrat, they even have occasional moments of Looney Tunes-like inspiration worthy of a few hearty laughs.

Now comes The Ice Age Adventures of Buck Wild, and not only is this sixth installment easily the worst in the series, but it’s also the one that forces me to take back my comment that none have been “outright terrible.” There is no Scrat. Other than Simon Pegg as thrill-seeking, one-eyed weasel Buck Wild, it appears none of the other primary members of the vocal cast — most notably the core quartet of Ray Romano, Denis Leary, John Leguizamo, and Queen Latifah — were asked to return. The animation is clunky and visually uninspired. Almost none of the gags land.

I have no idea who is going to enjoy this one. Die-hard fans are going to be disappointed by all the changes. Newcomers will be bored. Younger kids might like all the flashy colors and occasional attempts at visual whiz-bang, but it’s all so lazily paced and indifferently slapped together it’s possible they’ll lose interest long before the not-even-90-minute running time concludes. This Disney-produced effort — noticeably bypassing theaters to appear on the studio’s streaming service Disney+ instead — is a disagreeable waste of time.

Tired of having their adopted mammoth big sister Ellie (voiced by Dominique Jennings) constantly monitoring their every movie, possum siblings Crash (Vincent Tong) and Eddie (Aaron Harris) secretly head out on their own away from their chosen herd. Falling into a deep fissure in the Earth, they rediscover the tunnel leading directly to that lost world of dinosaurs and other creatures erroneously thought extinct that they journeyed to not so long ago.

Hoping to see Buck again, they are startled to find they’ve landed in a dangerous mess that could result in their getting eaten by a pack of ravenous raptors. A pint-sized dino with an enlarged brain named Orson (Utkarsh Ambudkar) wants to take over this lost world, and standing in his way is that plucky weasel. So as happy as Buck may be to see Crash and Eddie, given this new threat to his home, he isn’t in the mood to babysit the brothers. Worse, he’s worried they could inadvertently bumble their way into aiding Orson in his quest for subterranean domination.

The idea is that Crash and Eddie are supposed to learn things about responsibility, courage, selflessness, and family, while Buck ends up realizing that his lone-wolf attitude and steadfast refusal to plan will undoubtedly be his undoing, sooner rather than later, if he doesn’t change his ways. But all three of these characters had already learned variations of that during almost all of the previous Ice Age films. This gives these lessons little weight and even less meaning, so a sense of pointless déjà vu hovers right from the start.

I do say some of this would have been, if not acceptable, at least not nearly as bothersome if there had been some solid laughs sprinkled here or there. But with no Scrat, and with so much of the plot feeling like a second-rate Cartoon Channel riff instead of a sequel to any of the other entries in the series, it’s a significant problem that there are no original ideas or that the characters — both old and new — aren’t any fun to hang out with.

While I know I’m not the target audience, I still shouldn’t have loathed every second I spent watching The Ice Age Adventures of Buck Wild. It felt like a repugnant cash grab by a studio that had nothing to do with any of the previous installments and only got to make this one because they purchased 20th Century Fox and the majority of its assets. I really didn’t like this sequel, not at all, and I can’t wait to never think about it ever again. 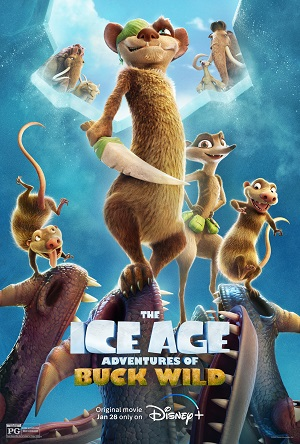