Enchanting In a World… Lives Up to Its Catchphrase

Carol Solomon (Lake Bell) is tired of living in her father Sam Sotto’s (Fred Melamed) shadow. A famous voice-over artist whose voice can be heard on countless movie trailers both big and small, since the tragic death of industry legend Don LaFontaine he is the undisputed king of the industry. Studios turn to him to give their films a distinctive sound long before the public gets the chance to view them, and this is not a task he takes lightly or is even partially dismissive of. 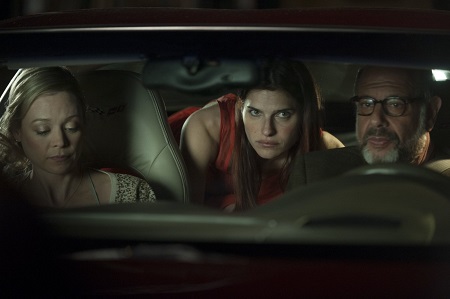 Carol, making a solid, if not exactly thriving, living as a vocal coach (her current gig is attempting to teach Eva Longoria a proper Cockney accent), dreams of entering the voice-over world and lending her linguistic stylizations to the trailer industry. Yet this a male-dominated world, one in which her father’s word is law, right now he’s busy proclaiming to all who will listen that up and coming newcomer Gustav Warner (Ken Marino) will become the new king. But when Gustav doesn’t show up for one of his gigs it is Carol who inadvertently ends up snagging the job, this one success giving her confidence she needs to believe it’s possible for her to follow in Sam’s footsteps, whether he wants her to or not.

I’m not sure In a World…, written and directed by Bell, could be any better if it tried. Smart, zany, heartfelt, ribald, unconventional, honest, moving and, best of all, consistently entertaining, this little character-driven comedic gem of a relationship (at times even romantic) drama is without question one of the summer’s cheeriest surprises. If you’ll excuse the wording, the movie is set within a world most know little about, while at the same time the inner workings of the narrative itself stay true to the complicated familial dynamics around which everything revolves. I felt like I knew who Carol was, could relate to her, understood her dreams, the fact I had no experience with the voice-over industry not changing any of this a single little bit.

I loved how her relationship with her father begins as simple melodramatic schlock only to blossom into something far more complex and authentic. I adored the fact that she and her older sister Dani (Michaela Watkins) didn’t always side with one another (even when Carol starts spouting “sister code” as if it’s their family mantra) in all thing yet each still had the other’s back when it mattered most. I found it awesome that an unexpected fling with Gustav didn’t go in anticipated directions, both of them acting like actual adults and not thirty-something children as they dealt with the consequences of their liaison. Most of all, I was charmed to see that the romance brewing between the heroine and her sound engineer (and best friend) Louis (Demetri Martin) wasn’t being crammed down my throat, the two of them finding a way to slowly waltz into one another’s arms with grace, maturity and restraint.

There’s more, not the least of which is the deft way Bell handles a subplot involving Dani and her husband Moe (beautifully underplayed by Rob Corddry), their marital complications having an endearingly awkward grace that’s tenderly genuine. Also standing out is the give-and-take between Sam and his new, much younger girlfriend Jamie (Alexandra Holden), their relationship brushing right up against typical rom-com stereotypes only to suddenly brush them aside with startling, emotionally captivating relish. Bell’s script is a consistent revelation, putting all the pieces of this 93-minute puzzle together a mesmeric joy I couldn’t get enough of.

Things do turn out pretty much as expected, and I can’t say Bell avoids or subverts every cliché she scrapes up against. But the performances are so universally excellent (Melamed deserves Supporting Actor Oscar consideration), the characterizations so enchantingly precise, the laughs so adorably sincere and the story so universally intoxicating I don’t think I could love this film with any additional passion or sincerity. In a World… isn’t just born out of LaFontaine’s iconic trailer catchphrase, it lives up to it, and imagining a world that this particular motion picture doesn’t exist within one I personally do not want to ponder. 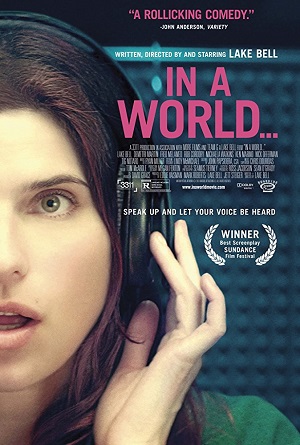