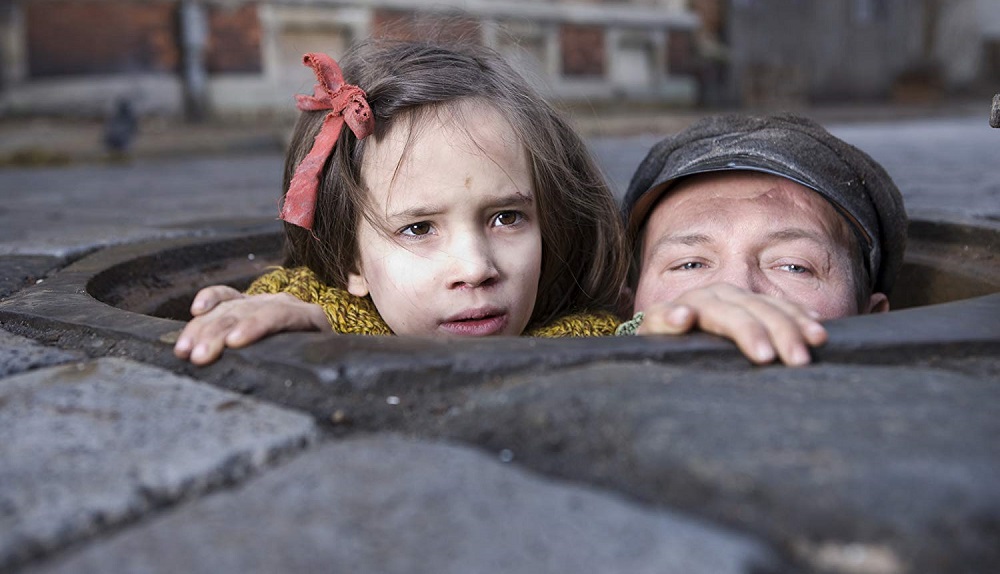 Holland’s In Darkness a Claustrophobic Saga of Heroism

There are moments in Agnieszka Holland’s (Europa, Europa) claustrophobic WWII drama In Darkness that are beyond stunning. Set in 1943 in Nazi-occupied Lvov, Poland, the film chronicles the story of father, devoted husband and unrepentant thief Leopold Socha (Robert Wieckiewicz). He’s a local sewer inspector who knows the underground tunnels like the back of his hand and uses this knowledge to hide his ill-gotten gains until they can be sold after the war. He also uses them to do something far deadlier and much more dangerous, hiding Jews underneath city after their ghetto is destroyed by German soldiers. 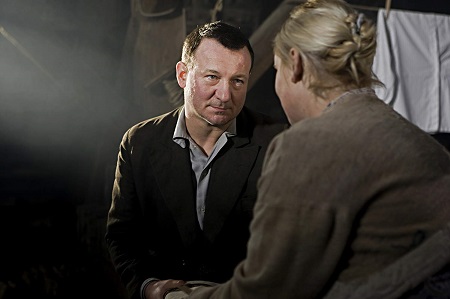 He doesn’t do this out of the goodness of his heart. Ignacy Chiger (Herbert Knaup) and his wife Paulina (Maria Schrader) pay him each day to keep them and their group alive. It’s a business arrangement, and while they do not trust the conniving Pole, the angry and bitter Mundek Margulies (Benno Fürmann) the most suspicious member of their group, none of them see any other option but to put their lives in his dirty, duplicitous hands.

As this is based on a true story, the overall outcome is never in doubt. If there had been no survivors then no one would have recounted the tale of what it was Socha, along with the aid of his wife Wanda (Kinga Preis), accomplished. Even so Holland’s film is still bracing and electric, diving into the murkily devastating waters of German oppression while creating a sense of impending doom that permeates the entire production. David F. Shamoon’s script doesn’t avoid cliché altogether, and there are certainly moments that feel ripped out of other WWII holocaust dramas, but the story is nonetheless immediate and visceral, and from the moment the Lvov ghetto is gutted and Ignacy, Mundek and the others descend into the sewers, to the second the survivors emerge into the light of day after 14 months of inexplicable terror, this tale is a fascinating marvel of survival that kept me glued to my seat.

Comparisons to Schindler’s List are inevitable. Much like the main character in that Steven Spielberg Oscar-winner Leopold Socha is hardly a saint. While a loving family man, he’s also not above pillaging and robbing the homes of those better off than himself or of using the plight of the Jews for his own personal gain. But also like Spielberg’s opus, this movie shows how seeing struggle and sacrifice first-hand drove Socha to put his life on the line for others. His selfless act saved their lives while also changing his, the heroic significance of what they were all able to accomplish nothing short of historic.

But the similarities end there, because while the major focus is on Socha, not for a moment do Holland or Shamoon forget about those trying to eke out survival within the dank, dirty and pitch-black confines of the sewers. Director of photography Jolanta Dylewska (Louder than Bombs) does an exquisite job of making this world come to life, of plunging the viewer into the abyss right along with those living there. The terror of the situation, the way shadow, concrete and water engulf a person in an attempt to bludgeon them into psychological submission, there is emotional weight and power to all of it, and for long portions of the film I found myself inadvertently shivering in the darkened theatre along with those doing the same right up on the screen. 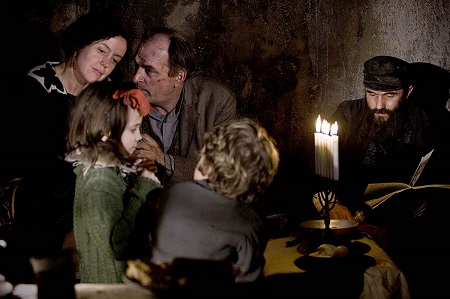 The melodrama can become a bit much, and a subplot involving Mundek and fellow survivor Klara Keller (Agnieszka Grochowska) searching for her sister Mania (Maria Semotiuk) at the Janowska Concentration Camp doesn’t feel believable. Also, due strictly to the fact the filmmakers are forced to pack 14 months of information into 145 minutes of screen time, events seem to stumble into one another with a bit too much simplicity, and there were times it was difficult to process just on how long had passed between Socha’s visits with those he sarcastically nicknames, “My Jews.”

Yet Holland has a firm grasp on the material, and the way she builds tension frame-by-frame is nerve-rattling. Wieckiewicz is wonderful as Socha, while the supporting cast, most notably Fürmann, Grochowska, Preis and Schrader, are equally superb. In Darkness took me to a place I wasn’t certain I wanted to go. By the time it was over, watching Socha, Mundek and the other’s collective heroism I couldn’t have imagined going anywhere else. 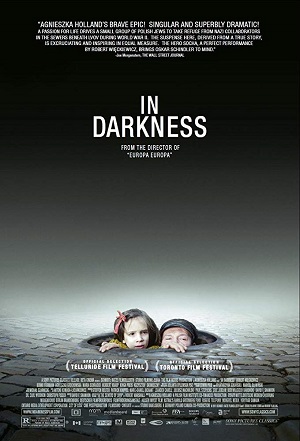