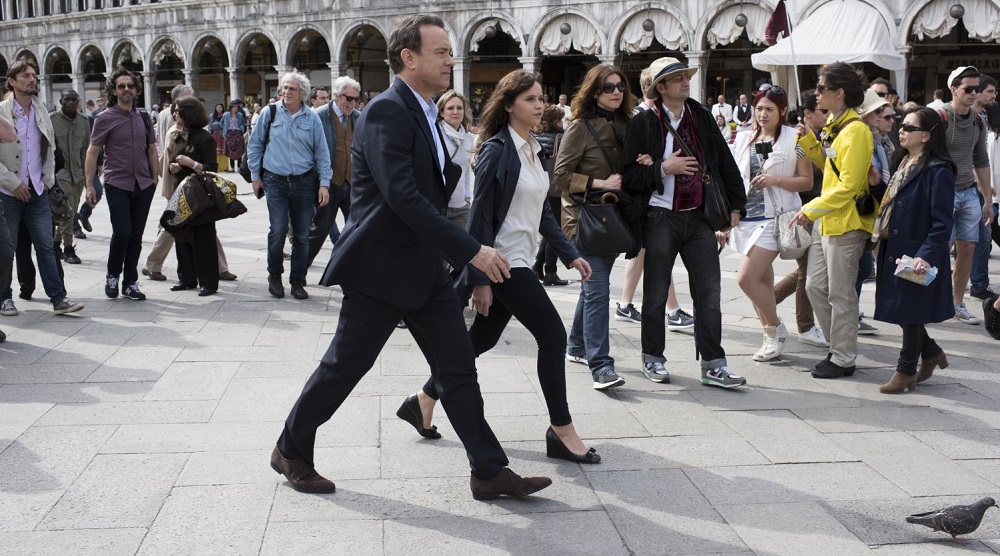 “The greatest sins in human history were committed in the name of love.” 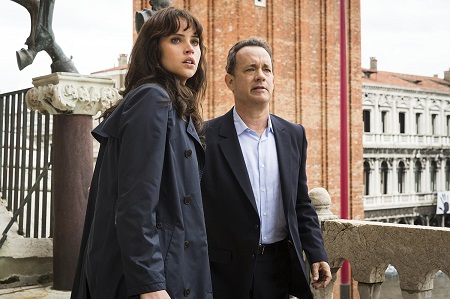 “Unlike its two predecessors, 2006’s The Da Vinci Code and its anemic 2009 follow-up Angels & Demons, the latest cinematic adaptation of one of author Dan Brown’s theological thrillers Inferno isn’t terrible. This does not make it good, and as much as all of them will say otherwise, it’s hard to imagine director Ron Howard, producer Brian Grazer or star Tom Hanks would be returning for a third go-around if the paychecks hadn’t been substantial. This is a dull, lazy adventure, one that is as mechanical as it is ludicrous, filled with third act plot twists so asinine and inane they’d likely have made me angry had they all not been so darn laughable.

After following ancient religious trails that led him to discover the identity of Jesus Christ’s progeny and helped save the Vatican from the Illuminati, Prof. Robert Langdon (Hanks) has gone back to teaching at Cambridge in relative anonymity. Or so he thought. Waking up with no memory of what has happened over the past two days, Langdon finds himself in an Italian hospital with only the young doctor Sienna Brooks (Felicity Jones) to help him put the pieces together. But before she can be of any assistance, an assassin (Ana Ularu) makes an attempt on their lives, forcing them to flee into the night with her hot on their tail.

Forced to retrace his own steps, with only Dr. Brooks to assist him, Langdon comes to the horrifying realization he’s a pawn in a massive global conspiracy involving billionaire recluse Bertrand Zobrist (Ben Foster) and the works of Dante Alighieri, most notably the latter’s depiction of Hell. On a journey that will catapult them across Europe with agents of the World Health Organization, including dogged French investigator Christoph Bouchard (Omar Sy), intent on catching them, the duo are in a race against time to stop a horrific virus from being unleashed that will wipe out half the world’s population. Also, not only is that mysterious assassin still after them, so is the shadowy Harry Sims (Irrfan Khan), the cryptic bureaucrat knowing more about what is going on than he’ll freely admit.

Good news? Unlike the other two entries in this series, Inferno hits the ground running and never looks back. Having not read the book, how similar all of this is to Brown’s source material I cannot say. That being so, screenwriter David Koepp (Premium Rush, Jurassic Park) goes out of his way to keep the momentum going at maximum velocity throughout, the film rarely slowing down for a breath, its only interludes one where the side characters explain what’s going on or make their intentions, good, bad and in-between, known to others. I can only imagine he’s streamlined things considerably, excising as much of the fat as he could, and as such at just barely two hours in length this third chapter in Langdon’s saga is relatively easy to sit through.

None of which makes what eventually transpires any more intelligent, the sheer stupidity of it all reminding one of a ‘24’ subplot that Jack Bauer would have taken care of in the first couple of episodes. The sheer volume of red herrings grows increasingly tiresome, as do the supposed twists and turns that arise during the final 30 minutes. The climax is an obvious cacophony of sound and fury, the only thing making it notable being the inspired setting and Howard’s initial attempt to pay homage to Alfred Hitchcock, namely the symphony hall finale of his 1956 version of The Man Who Knew Too Much. But it’s all just too silly to take even slightly seriously, the explosive final seconds about as thrilling as sitting in a dental chair waiting for the Novocain to kick in.

In fairness, the gifted Khan is having a blast, throwing off one-liners with charming ease while at the same time oozing a lethal form of menace that’s increasingly intriguing. I also really liked Hans Zimmer’s (Interstellar) viscerally propulsive score, the music doing a wonderful job of keeping the energy level up even when the on-screen action becomes difficult to maintain interest in. Finally, cinematographer Salvatore Totino (Everest, Concussion) returns once again to lens the proceedings and does so rather beautifully, his smoothly enthralling images utilizing the various lush European locations magnificently. 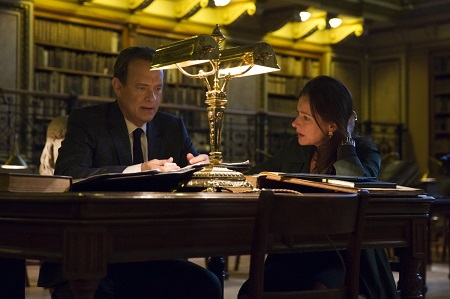 Not that I care. The movie is absurd, and the only saving grace is, unlike The Da Vinci Code or Angels & Demons, Prof. Langdon’s latest adventure is thankfully never boring. But Howard is on autopilot, and while his film looks and sounds terrific it never does anything notable to stand out in a way that might make all these tedious absurdities palatable. As for Hanks, so good in Clint Eastwood’s Sully, while he’s hardly terrible it’s just as clear he’s going through the motions, and it’s only in a pair of heartfelt scenes with the great Danish actress Sidse Babett Knudsen that I felt anything akin to a pulse emanating from him. As I already said, Inferno might not be terrible, but that’s not saying much. Here’s hoping all involved are done making these Dan Brown adaptations, because I seriously doubt I have the desire or the energy to try and sit through another one anytime soon.”

Inferno played better at home than it did in a theatre, and for fans of this series I cannot imagine they’ll be all that disappointed if they choose to give the film a look. I don’t think it’s particularly good, but it is incredibly easy to watch, and on that front I guess I’d have to call this The Da Vinci Code and Angels & Demons sequel something of a moderate success.

This Blu-ray features an English DTS-HD Master Audio 5.1 soundtrack along with a Spanish Dolby Digital 5.1 option and includes English SDH and Spanish subtitles.

Visions of Hell (5:35) – Cast, crew and author Dan Brown on the various themes ideas present in both the novel as well as the far more streamlined feature film adaptation.

Inferno Around the World (13:34) – Nice little featurette on the international casting process utilized for this entry in the popular series.

A Look at Langdon (6:21) – A look at Robert Langdon focusing on how he has grown and transformed throughout the series.

This Is Sienna Brooks (5:48) – Felicity Jones and the character she portrays under a microscope.

The Billionaire Villain: Bertrand Zobrist (5:13) – Ben Foster and the character he portrays under a microscope.

Inferno isn’t a great movie, but it is better than the two Robert Langdon mysteries that preceded it, and out of the three it is the one I find I can rewatch fairly easily. Sony’s Blu-ray is a technical marvel, and for fans of the series adding to the library is as elementary a decision as they come. 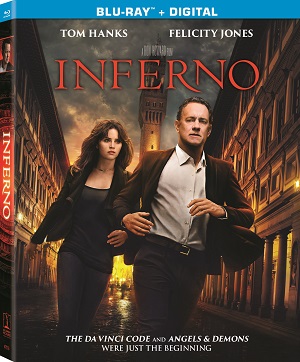