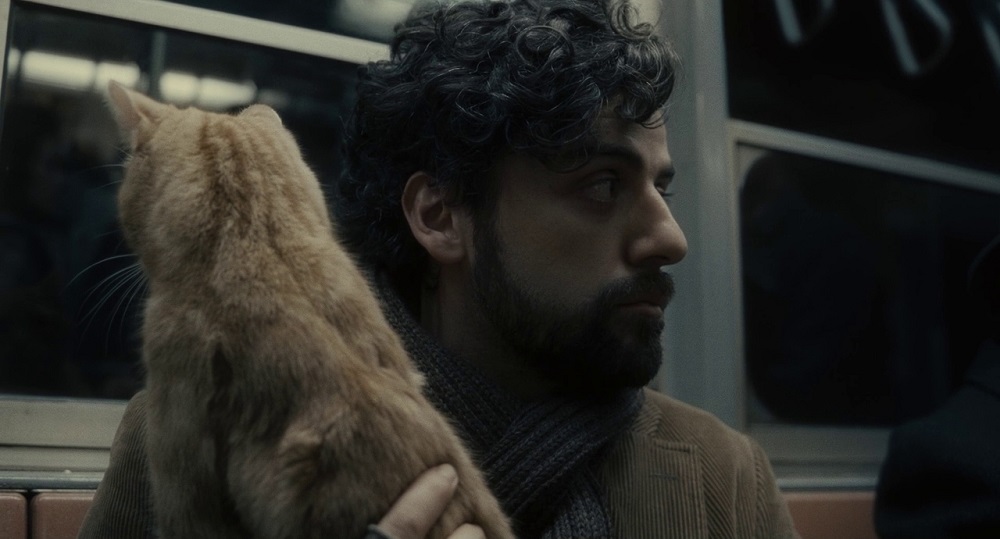 It is 1961. Folk singer Llewyn Davis (Oscar Isaac) is making the rounds of the Greenwich Village club scene, surfing from couch to couch of friend, admirer and fellow entertainer alike as he tries to make a name for himself. With a scraggily cat in tow, he ends up in the home of friend Jim Berkey (Justin Timberlake) and his loving, opinionated wife Jean (Carey Mulligan), musicians both on a road leading towards success that he has managed to successfully avoid. She’s mad at Llewyn for a number of reasons, most of them too personal to be said out loud, and everything being equal she’d rather not have him staying more than one night underneath her roof. 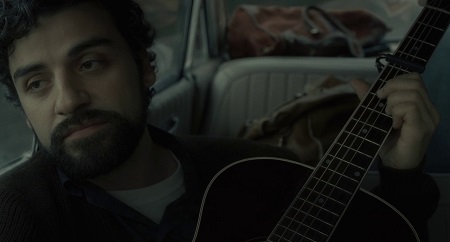 As far as plot goes, I’m not going to say much more as it relates to Joel and Ethan Coen’s latest drama, the musically-driven character study Inside Llewyn Davis. Suffice it to say there is a road trip, dreams of stardom are persued and potentially landmark hit records are magically recorded. Decisions are made, lives are put in peril, accusations are thrown and forgiveness is offered, all the while an egocentric search for some sort of nebulous truth that’s barely understood and only hesitantly embraced lingers in the smoky darkness waiting to be discovered.

Like some of the pair’s quieter works such as A Serious Man, The Man Who Wasn’t There or Miller’s Crossing this film sneaks up on you, implanting itself upon the viewer’s psyche in a way that’s almost virus-like in its intensity. Its themes and ideas are as memorable as the tunes its singers are warbling, every moment a rapturous concert of human experience and sensation running the gamut from tragedy to celebration with melodious ease.

This movie is amazing. Llewyn Davis is a complex, highly flawed, selfishly narcissistic yet surprisingly tender young man. Where he goes, what he does, all of it matters, and even though little on the surface is accomplished what’s being said between the lines is what makes the film of such vital importance. The subtext is extraordinary, the way it shines such a spotlight on the human condition even more so.

Add Isaac to the list of actors that give phenomenal, career-best 2013 performances. A recognizable face in films as diverse as W.E., Drive and The Bourne Legacy, nothing prepared me for the depth of feeling or the stunning emotional intricacy of his work as Llewyn. His reaction to what is happening around him is never what I expected it to be, his solutions to varying problems that rear their heard during his journey eloquently personal. The look of longing in his eyes can speak volumes, while the passion pouring out of his voice as he sings was enough to break my heart in two, his song leaving pieces of me scattered across the theatre floor with the warbling of every note.

The music, a mixture of vintage material and new period-style recordings, is sensational, T-Bone Burnett reuniting with the Coens for the third time (O Brother Where Art Thou?, The Ladykillers) to help craft a soundtrack for the ages. Their signature moment, a killer recording sensation with Isaac, Timberlake and fellow actor Adam Driver, is invigoratingly dynamic, and when it came to an end I immediately wished I could have rewound the sequence in order to re-watch it again right that second. 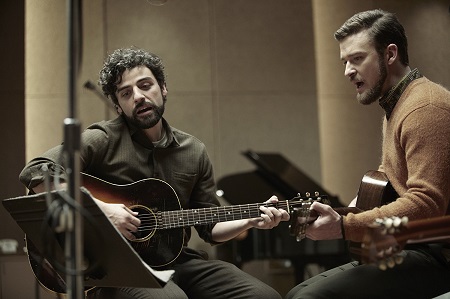 Bruno Delbonnel’s (Amélie) cinematography is also stupendous, his framings having an earthy texture that gives the picture a grounded minimalism it never would have attained otherwise. Each frame has a meaning that’s utterly unique in and of itself, this visual mastery allowing Llewyn’s trip to proceed in a way that is as expressive as it is intricate. It’s stunning stuff, his camera gliding within the confines of the Coens’ narrative in a manner that is majestic and subtle, these images augmenting the action without unintentionally overshadowing the emotional components at any point.

I’m being purposefully vague about many of the aspects of this tale, even the aforementioned road trip that takes up a large part of the second and third acts. While actors like John Goodman and Garrett Hedlund make impactful appearances, I’d rather leave what it is they are doing here a mystery. Inside Llewyn Davis revels in its own lyrical idiosyncrasies, each note a tuneful reminder that the songs we sing secretly to ourselves are oftentimes full of bigger lies than the ones we happily hum out loud for the rest of the world to mindlessly listen to. 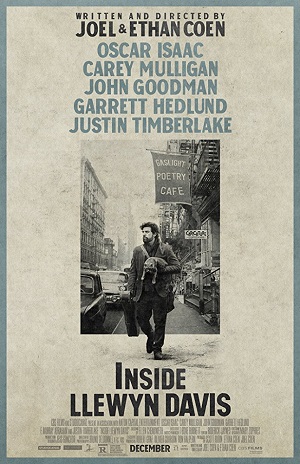