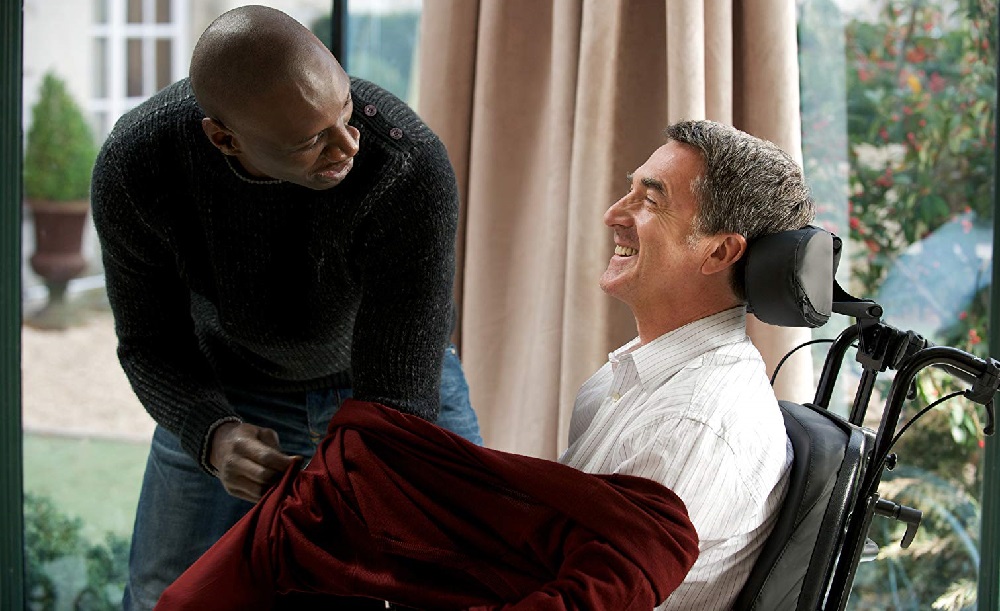 Driss (Omar Sy) wasn’t interested in the job. Not only wasn’t he qualified to be the caretaker for quadriplegic millionaire Philippe (François Cluzet), the cynical ex-con was hoping to get passed over for the position so he could start receiving government assistance meaning he wouldn’t have to work at all. Not because he’s lazy, although he’d never argue against those who’d say otherwise, but more because he’s got so much else on his mind, the world at home in his tiny tenement apartment overstuffed with brothers and sisters not exactly all it could be.

Phillipe, however, sees something in Driss. He’s not looking for a caretaker that treats him as some sort of porcelain doll. He wants someone who doesn’t look at his condition and immediately slinks back into the corner. He wants someone to tell him how it is, give him the harsh truth and tell some off-color jokes at his expense that are anything but politically correct. Most of all, he wants someone around that sees him as an equal, if not physically, then at least intellectually and emotionally, knowing that a little tough love might be the difference between giving up on life or going through the remaining years with energetic enthusiasm.

Based on a true story, The Intouchables is a wonderful melodrama that manages to walk a fine line between syrupy sentimentality and honest emotionalism. Surprisingly funny, never beating me over the head with the importance of its themes or the majesty of its human scope, the movie ended up being a profound saga of friendship I utterly adored. This might just be one of the finest motion pictures I’m likely to see in all of 2012.

Written and directed by Olivier Nakache and Eric Toledano (Those Happy Days), the movie is an inspired mélange of drama, heartbreak, perseverance and triumph that soars to dynamic heights. The pair, using Philippe and Driss’ relationship as inspiration, refuse to let the project fall into treacle. They do not preach. They do not beat the viewer over the head with bogus musical cues or overly showy visual references. A case could be made that they potentially stand too far off in the distance, barely commenting on any of the actions coming to pass, but for my part this is one debate I wouldn’t choose to be a part of. I like the subtle way in which they handle the story, the tears I shed at the end feeling entirely genuine.

If I were to have any complaints, most of them would revolve around the various tangential subplots that take away from the central narrative.  The one concerning Philippe’s headstrong yet insecure teenage daughter probably comes off the worst, mainly because it is just too blandly familiar. But Driss’ drama back at home is hardly compelling itself, mostly because what’s happening is too indistinct and ephemeral to matter.

Yet none of this bothers me as much as it probably should. The way Philippe and Driss relate to one another, how they interact, the bond they form, all of that felt immediate and sincere. I never questioned where this film was coming from, never doubted that it was staying true to its characters and their respective stories. It built its narrative naturally, compulsively heading to a place of profound ebullience that had me smiling in glee.

The acting is stellar, the always wonderful Cluzet a magnetic a presence. I never pitied Philippe, never allowed myself to feel sorry for him, the actor giving him an inner bravado that oozed its way off of the screen and into the deepest corners of my heart. But as good as he is, relative newcomer Sy is every bit his equal. Winner of the César Award for Best Actor (the French equivalent of an Oscar), this is a superlative performance that consistently walks a fine line. Sy easily could have dropped into caricature, into over the top lunacy, and ended up making Driss someone to laugh. But the actor never allows this to happen, refusing to cut his character any slack in order to make him into something he is not. He is a man learning to be at peace with himself, finding in his new charge a strength of spirit and benevolent purpose he may never have discovered had they not met.

But that’s the whole movie in a nutshell. The Intouchables balances precipitously at the edge of melodramatic excess yet somehow never falls over into that particular ravine. Nakache and Toledano confidently navigate the material’s risky waters and in the process avoid drowning in the unbearable maudlin claptrap of sap and saccharine that like a siren is constantly beckoning them. But the movie never goes there, doesn’t sink into those cinematic oceans of doom. It is instead a moving marvel of hope and inspiration that had me cheering, the film a mesmerizing gem only the most cynical could ever despise. 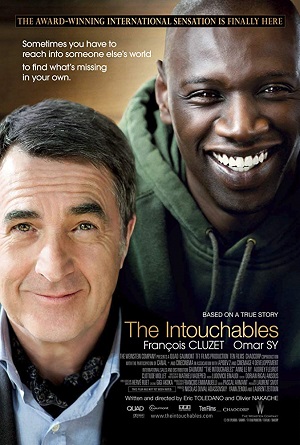