Muschietti’s It Adaptation Doesn’t Clown Around

It comes out every 27 years. It feeds on fear. It feeds on life. It feeds mostly on children. And, in the summer of 1989, in the small town of Derry, Maine, It has returned. As school comes to an end and summer begins, 13-year-olds Bill Denbrough (Jaeden Lieberher), Richie Tozier (Finn Wolfhard), Beverly Marsh (Sophia Lillis), Ben Hanscom (Jeremy Ray Taylor), Mike Hanlon (Chosen Jacobs), Eddie Kaspbrak (Jack Dylan Grazer) and Stanley Uris (Wyatt Oleff) all discover they have more in common than being social outcasts. This so-called “Losers Club” have all been seeing things, ominous daytime nightmares revealing their deepest, darkest fears, all of them culminating with a devilishly grinning clown named Pennywise (Bill Skarsgård) attempting to feast on their souls.

Bill is the first to say out loud what they’ve all been thinking: these are not nightmares. Whatever Pennywise is, It is a real thing, an entity of some sort that keeps coming to Derry for a very specific reason, and whether any of them want to admit it or not, all seven of them are now in It’s crosshairs. But at the same time, together they appear to be a challenge for this strange, strong malevolent It. More, It knows this. If they can hold strong, maybe they can banish It out of Derry for good, ensuring no other children, kids like Bill’s own younger brother Georgie (Jackson Robert Scott), don’t end up another one of this creature’s victims.

Stephen King’s sprawling, undeniably terrifying novel It was first released back in 1986. Since then it has sold millions of copies all around the globe, did for clowns what Jaws did for sharks and spawned an Emmy-winning miniseries in 1990 that gave star Tim Curry another signature role up there with Dr. Frank-N-Furter in The Rocky Horror Picture Show and Darkness in Legend. The story is one of the author’s signature achievements that sits alongside The Shining, Pet Sematary, Cujo and The Dead Zone in the literary horror pantheon, and for that reason alone it comes as no surprise Warner Bros has been trying to come up with a way to bring King’s 1,138-page tale to the big screen for over a decade.

After parting ways with original director Cary Fukunaga (Beasts of No Nation, Sin Nombre), who still gets a screenplay credit alongside Chase Palmer and Gary Dauberman (Annabelle: Creation), the studio turned things over to Mama filmmaker Andy Muschietti, and the results are moderately spectacular. Focusing entirely on the kids and their story, leaving the portion of the tale where they’re all 40-year-old grownups to be told at a later date, the movie does make a few radical changes from King’s source material. But it does maintain the same coming-of-age adolescent vibe that made stories like Stand by Me and Silver Bullet so successful. At the same time it does not skimp an ounce on any of the literal horrors which assault Bill and his friends. This is a strong film, and by making it a point to flesh out the kids and their friendship in such a complex, heartfelt way Muschietti and his team end up doing a bang-up job bringing It to life.

While all of the children making up the Loser’s Club are perfectly cast, it is the core group of Bill, Richie, Beverly, Eddie and Ben this version focuses on. As such, Lieberher, Wolfhard, Lillis, Grazer and Taylor get the most screen time, all five making quite the impact as things progress towards their conclusion. They manufacture an easygoing camaraderie and chemistry that’s appealing, the evolution of their combined relationship the story’s heart and soul. Lieberher, last seen in The Book of Henry, and relative newcomer Lillis do the majority of the heavy lifting, while “Stranger Things” star Wolfhard is a fast-talking scene-stealer responsible for the majority of the film’s well-earned laughs. Grazer, soon to be seen in the sitcom “Me, Myself and I,” might have the film’s best dramatic moment, a scene where he confronts his smothering, overbearing mother about his medication packing a somewhat surprising punch. As for Taylor, while his arc is less nuanced than the others, he’s still responsible for delivering most of the historical exposition fleshing out what is going on, doing so in a way that’s more interesting and emotionally involved than it likely has any right to be.

Not so lucky are Jacobs and Oleff. Even at 135 minutes, there’s likely just not enough time to give every member of the Loser’s Club their fair shake. Even so, Mike and Stanley really do get relegated to the background, the former’s arc significantly altered as far as King’s original prose is concerned. While still heroic, neither of them gets to do near as much as any of their costars, or, if they do, it’s in a manner that’s too simplistic to register in the same way as any of the actions taken by Bill, Beverly, Richie, Ben or Eddie prove to be. They’re even overshadowed by sociopathic thug Henry Bowers (Nicholas Hamilton), the level of abuse tossed his way that’s helped lead him to walk down a path that ends in homicidal rage far more multifaceted than anything Mike or Stanley get to experience during any step of their respective journeys.

There are also some perplexing changes as they pertain to Beverly, both positive and negative. On the happy end of the spectrum, the writers thankfully give her a ferocious dimensionality that is only hinted at in the novel. She’s a complete character here, Beverly’s inner strength coupled with a tenderly compassionate demeanor that’s spellbinding, young Lillis doing a grand job making all of this come alive with beguiling dexterity. This makes the character’s transition from a hero who never misses a shot in the book to a cliché damsel in distress the remaining members of the Loser’s Club have to rally together to save in the film even more disappointing. It left a moderately bad taste in my mouth, one that didn’t entirely wash away by this story’s end.

Still, this version of It is powerful stuff. Muschietti’s direction is confidently assured throughout, and while, and admittedly much like the miniseries, I often wished we saw more of Pennywise, it’s also clear the filmmaker made the right decision to only sprinkle this demon into the narrative as infrequently as possible. This allows Skarsgård’s morbidly terrific performance to cackle with macabre electricity, his appearances having the same effect upon the audience as John Carpenter’s utilization of Michael Myers did in Halloween or Steven Spielberg’s infrequent use of that Great White Shark did in Jaws. 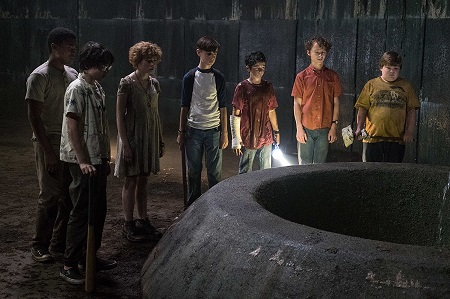 Gorgeously shot by Chung-hoon Chung (The Handmaiden), meticulously edited by Jason Ballantine (The Great Gatsby) and featuring miraculously unsettling interiors crafted by production designer Claude Paré (The Age of Adaline), from a technical aspect things are close to perfect. Best of all might be Benjamin Wallfisch’s (A Cure for Wellness) unrelentingly disquieting score, his eerie themes casting an appropriate spell over things that is as uncomforting as it is beautiful.

In the end, Muschietti’s film is a big, fat, gorgeously produced love letter to King’s epic novel. His version ranks up there with Tobe Hooper’s Salem’s Lot, Stanley Kubrick’s The Shining, David Cronenberg’s The Dead Zone, Rob Reiner’s Stand By Me, Frank Darabont’s The Shawshank Redemption and Brian De Palma’s Carrie as another great adaptation of one of the author’s works. It is not without a few missteps, and for die-hard horror junkies it isn’t quite as scary as some might potentially want it to be. But featuring one of the year’s best ensembles, anchored by a performance by Skarsgård that’s chillingly divine and featuring a number of crackerjack signature sequences that had me sitting on the edge of my seat in excited glee, I’m ready to head back to Derry for the next chapter of this story right this second. The death lights are calling; floating into the theatre to give them a look an experience most won’t soon forget. 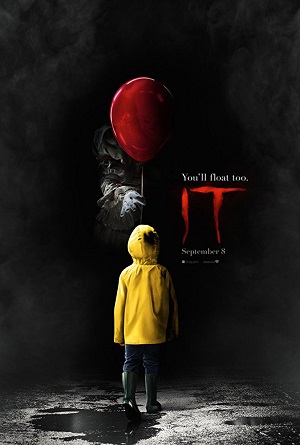