“It could look like someone you know or it could be a stranger in a crowd. Whatever helps it get close to you.”

“Jay Height (Maika Monroe) thinks she’s in love. The 19-year-old college freshman has met someone, Hugh (Jake Weary), and the young woman is starting to wonder if he’s the one. So much so she doesn’t think twice before laying down with him in the backseat of his car, bubbling over in contented satisfaction, daydreaming what their life together might look like after their canoodling has come to a climax.

Hugh, however, has a secret. He’s not who he says he is. He’s been running from something, a fantastical force that’s been following him, slowly, methodically, step-by-step, without stopping, ever since he slept with a random woman sometime back during a one night stand. To get rid of it he must pass it on to someone else, sleep with them so this demonic presence will stop chasing him and turn their eye in their direction. That someone is Jay, and now it is her turn to be followed.

There is little flashy about It Follows, writer/director David Robert Mitchell’s magnificent follow-up to his award-winning The Myth of the American Sleepover. It moves at the same measured, self-assured, deliberately unsettling pace as the evil force stalking Jay, achieving a chilling intimacy that sent shivers down my spine and shockwaves through my soul. Powerfully astute, deceivingly complex, this is one of the better horror yarns I’ve seen in ages, and without question Mitchell’s latest is almost assured to be regarded as one of 2015’s best come the end of the year.

The director sets the mood and the tone right from the start, showing a young woman piercingly staring piercingly into the distance at some unimaginable terror no one else can see let alone would believe exists. Mike Gioulakis’ (John Dies at the End) camera deftly surveys things, moving in ever more purposeful circles as it allows what’s happening to develop with sinister melancholy. Things culminate on a beach, a body crumpled to the point of dismemberment, a look of introspective dread still plastered upon a mournful, distraught face.

But this is only a precursor. Recalling the best of John Carpenter, Brian De Palma and David Cronenberg, this is a mournful journey into the unknown revolving around a pure yet still not-so-innocent flower who slowly but surely is compelled to give up the best of what she believes herself to be in order to chart a course towards survival. It is an examination of the choices we make as youngsters and the impact they end up having on the remainder of our lives, making the film both a complex dissertation on growing up as well as a sneakily compelling ghost story.

Monroe, her star on the rise for some time now, but most notably for her mesmerizing turn in Simon Barrett and Adam Wingard’s The Guest, gives a performance for the ages. Her joy in meeting Hugh is playful, childlike. Her exultation after their coupling filled with warmth and wonder. Her growing panic as to what is happening, the way she evolves, transforms into something close to an entirely new person, all of it is genuine, a sad, lonely little tear during one quiet reflective moment speaking volumes as to what has happened as well as what is still to come.

Mitchell doesn’t let his star down. He surrounds her with a plethora of young talent, most of whom aren’t known by name, but whose faces are decidedly familiar. Keir Gilchrist, Lili Sepe and Olivia Luccardi portray Jay’s core group of friends and family, while Daniel Zovatto is the all-too-sexy boy next door who throws himself into the middle of the proceedings for reasons decidedly his own. Much like The Myth of the American Sleepover, the interactions between these youngsters is frank, amusingly authentic, thus when things spiral into chaos the overall effect is distressingly mind-blowing in its emotional forcefulness.

Comparisons to films as diverse as Halloween, The Grudge, Rosemary’s Baby, Ringu, Body Double and The Shining are probably inevitable, and without question Mitchell had to have been inspired by the directors I’ve already mentioned, as well as by a whole slew of additional ones whose identities are probably obvious to most genre fanatics. But his film is more than just a deft homage; it’s also its own uniquely captivating animal, telling a story that’s as dexterous and disquieting as it is simple and straightforward.

I’d be remiss if I didn’t mention the score. Composed by Rich Vreeland (a.k.a. Disasterpeace), this is an ambient throwback that feels like the second cousin to Carpenter’s music for Halloween and Escape from New York combined with the unearthly undulations of Louis and Bebe Barron’s “electronic tonalities” composed for Forbidden Planet. The whole film feeds off this music, thrives on it, each composition, change of tone and audio thwack! augmenting what’s happening on the screen to perfection.

There’s plenty more, but this is one of those times where it’s better to let the picture speak for itself without much more in the way of embellishment from me. A stunning piece of cinema, It Follows is a darkly bleak sojourn into adulthood that’s more than just your run-of-the-mill genre entry, Mitchell crafting a modern American masterpiece of disaffected youth dealing with the repercussions of their revolt that will undoubtedly stand the test of time.”

It Follows is one of the year’s best films. There’s nothing additional to add other than you should see it at once.

Audio Commentary with film critics Eric D. Snider, Britt Hayes, Samuel D. Zimmerman, Alison Nastasi, Eric Vespe and Scott Weinberg (who moderates) – Much like his commentary track for Snowpiercer, Weinberg begins with a thoughtful, nuanced introduction where he professes his love for the film while at the same time digging into a lot of the complex narrative intricacies looking at them in a way that feels delicately intimate. Sadly, while still a fun listen, this time around the critics assembled don’t offer near as much fodder for conversation as they did for Snowpiercer. Still, definitely worthwhile, and I’d kind of love it if Anchor Bay and The Weinstein Company would allow Weinberg to continue doing this sort of thing for some if its future releases.

A Conversation with Film Composer Disasterpeace (4:56) – Solid, if brief, interview piece with Vreeland where he talks about how he went about composing the instantly classic score.

It Follows is a stunning, thought-provoking smash that gets more devastatingly profound the more times I watch it. Anchored by a performance from Monroe that’s one of the year’s absolute best, this is a stunning motion picture that’s only going to grow in stature and import with each passing year. As I’ve already stated, see it at once. 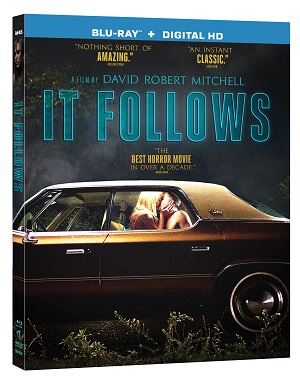