Emma Mandrake (Erinn Hayes) and her husband Pete (Blaise Miller) host a semi-annual Sunday brunch for a group of their friends. As per usual, Tracie (Julia Stiles) is bringing her latest beau, University professor Glen (David Cross), and even though things are going well (it’s their third date) she’s pessimistically certain he’ll prove to be insane just like her past boyfriends. Other guests include chemist Heddy (America Ferrera), her longtime boyfriend Shane (Jeff Grace) and vivacious marrieds Lexi (Rachel Boston) and Buck (Kevin M. Brennan). Jenny (Laura Adkin) and Gordon (Rob McGillivray) are also supposed to attend, but as they’re perpetually late for everything the chances they arrive before desert are relatively nil.

Things go as normal. The girls bicker and banter back and forth while a few of the guys wonder what the score of the game is. Yet things aren’t entirely what they seem. Shane’s attempts to be victorious in the online bidding of a rare comic are undone by a bad cell connection. The score of the game can’t be ascertained because the cable apparently is out. Going to the computer isn’t helping as the internet is also down. On top of that, Emma and Pete are getting a divorce, a little tinsel of information that inadvertently slips out long before the pair meant for it to.

Oh. Yeah. On top of all the regularly scheduled domestic drama, terrorists have also detonated a handful of Dirty Bombs downtown, the effects of which are slowly engulfing the remainder of the city. Trapped in the house, no way to escape, forced to seal it off completely from the outside world, the four couples are slowly coming to the realization this afternoon might just be their last, their individual problems now a tiny bit insignificant considering current events.

The genius of writer/director Todd Berger’s (The Scenesters) It’s a Disaster is just how rudimentary and mundane much of what transpires within its fiendishly brief 88 minutes turns out to be. While these seven friends and one newcomer to the group do freak out, do have moments where they ponder more than their own selfish lives, mostly they treat the revelation that this could be their last day on Earth in a way that feels honest, realistic and true. It’s like someone took The Big Chill, Manhattan Murder Mystery, A Wedding, The Last Supper, Right at Your Door and a random episode of “The Big Bang Theory” or “Modern Family” and dropped them in a Cuisinart, the resulting mélange a surprisingly smart and consistently funny stew I found extremely tasty.

It’s interesting, considering how short the movie is combined with the number of individuals involved in the chaos, to discover how richly defined all of the characters are. Each is given their own beat, their own moment, each performer asked to craft three-dimensional complexity no matter how limited their screen time might prove to be. Berger’s script isn’t afraid to push to the extremes, doesn’t shy away from potentially alienating viewers by having someone say or do something that might be construed as unforgivable, the filmmaker making sure to keep his perspective that the enormity of the situation at hand is completely incomprehensible to a group stranded in such a tiny space.

Unsurprisingly, some actors make more of an impression than others do, Stiles and Cross stealing a great deal of the limelight. But it should be noted that all of the women excel, Hayes, Ferrera and Boston all taking center stage on more than a number of occasions. Each makes a magnetic imprint, the deep vibrancy of their respective performances a genuine surprise that kept me on my toes.

Things can feel a little stage-bound or overly theatrical, especially early on, Berger’s dialogue trying to find just the right John Sayles meets Lawrence Kasdan cadence yet it never quite gets there. For about ten minutes I was worried the facile banality of what was happening was going to force me to tune everything out, and even though I was somewhat intrigued by the way each of the actors was throwing themselves into the proceedings, I still wasn’t certain there was going to be enough in the way of narrative meat and potatoes to keep me watching.

How wrong I was. The setup to all of this is pure inspiration, Berger upping the ante and tightening the screws with assertive inspiration. He makes each person real, a flesh and blood persona I could relate to and understand, the bleak nature of the dark comedy becoming all the more hysterically poignant because of this. Also of note, the director crafts a final ten minutes that are as bleakly humorous as they are arrogantly sublime, closing things out with an imaginative gusto that’s absolutely perfect. It’s a Disaster is a satirical triumph, an almost instant cult sensation I can’t help but hope audiences discover and hold dear for many years to come. 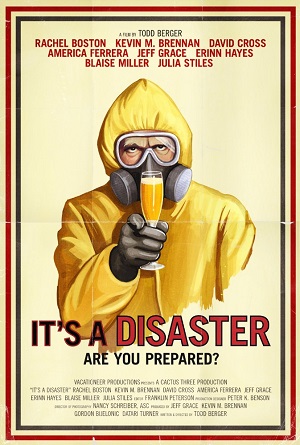