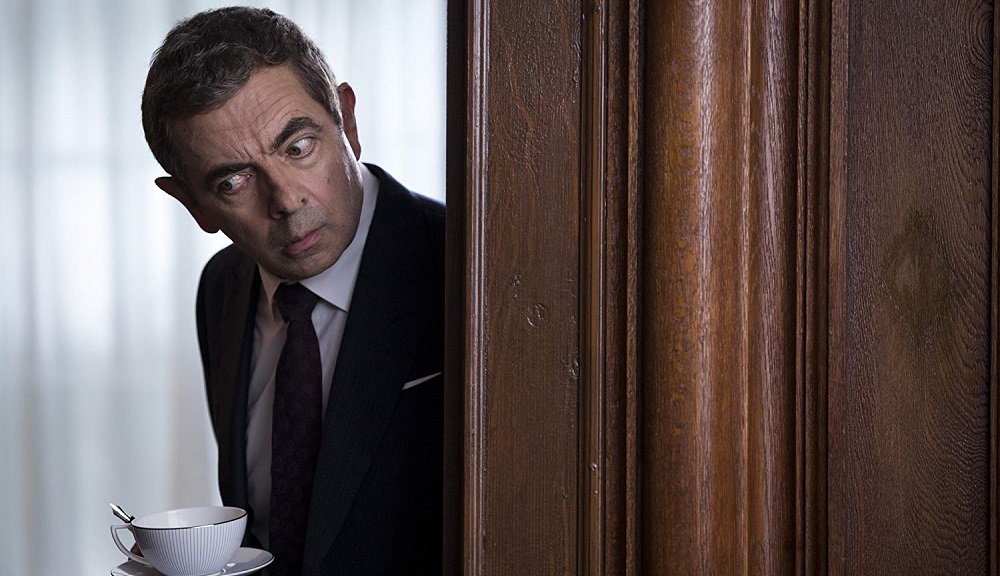 Working at an exclusive preparatory school secretly training his pupils in all of the minute intricacies of becoming a master spy, Johnny English (Rowan Atkinson) is called out of retirement by the British Prime Minister (Emma Thompson) to stop a dangerous cybercriminal. They’ve targeted the country’s infrastructure and also downloaded the identities of every undercover agent currently out in the field. That’s why English is the man for this job. He’s an analog agent who hasn’t worked for MI7 in over seven years, and as such he’s not in any of the databases this mysterious figure has been able to hack into and download. 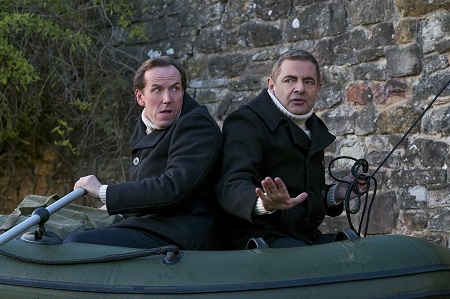 Reunited with trusted associate Bough (Ben Miller), English becomes convinced mysterious Russian Ophelia (Olga Kurylenko) is the key to figuring out the identity of this nefarious hacker. She works for an American tech billionaire (Jake Lacy) who is currently in negotiations with the Prime Minister to take over control of all of Great Britain’s cybernetic security. With Bough by his side English continues to investigate, even after he’s told in no uncertain terms by his superiors he’s looking in the wrong direction. But this is one formerly retired secret agent who doesn’t know when to quit, and even if he has to drop his pants or put on a suit of armor he’s going to do whatever it takes to save the day.

Johnny English Strikes Again is the long-in-coming third chapter in the reasonably popular spy comedy series featuring British favorite Atkinson. Much like 2003’s Johnny English and 2011’s Johnny English Reborn, I can’t help but suspect fans of the series (and of the actor) will enjoy themselves for all of the sequel’s refreshingly brief 88 minutes. Everyone else will likely wonder what all the fuss is about or how this character has garnered three features in the span of 15 years. It’s an either-or proposition, finding any sort of middle ground close to impossible.

I tend to be in that latter group. Make no mistake, Atkinson is a unique talent. From Bean to “Black Adder” to all sorts of movies and television shows in-between, he has an engaging ability to generate laughter in a variety of indescribably creative ways. I’m continually impressed by him. I am just equally almost always underwhelmed by the projects he’s the primary star of. They just don’t do a lot for me, and while I hardly detest any of his efforts I cannot say I would have felt at all terrible had I never watched any of them in the first place.

That’s the case here. There are some terrific gags, not the least of which is an inspired extended bit where English descends into a virtual reality simulation only to accidentally walk right out into the middle of the real world thinking he’s still confined inside the safety of a control room. The whole sequence allows Atkinson to be in peak form, showcasing his physical and verbal talents in equal measure. There are also some decent moments between him Miller that’s couldn’t help but get me to giggle a time or two, and it also goes without saying that a viciously irritated Thompson is good for a whole barrel full of laughs all by herself. 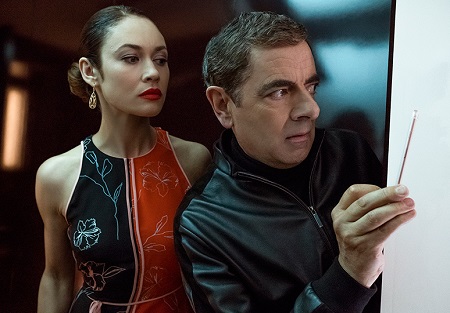 But there’s just no point to any of it, at least none that I found continuously amusing. William Davies’ (Puss in Boots) script isn’t exactly intricate or difficult to follow, which would be totally fine considering this is a comedic parody of spy thriller tropes if the majority of the jokes didn’t feel so obvious. There’s little here that comes off as risky or particularly adventurous, everyone content to go through the silly, absurdist motions more than they are in trying to add any real comedic mayhem into the material. It’s pleasantly ho-hum and is content to be so, and while that will work for some viewers for me that’s just not a trait I can get excited about.

There’s little more to add. I don’t dislike Johnny English Strikes Again. It’s perfectly harmless and I have nothing against Atkinson trotting this character back out for a third escapade. But much like its predecessors, I’m never going to watch it again. More, I’m not sure I feel like I needed to give it a look in the first place. These comedies just aren’t my brand of tea, and as such I’d rather not drink another cup anytime soon. 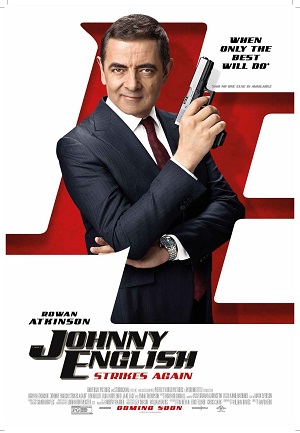