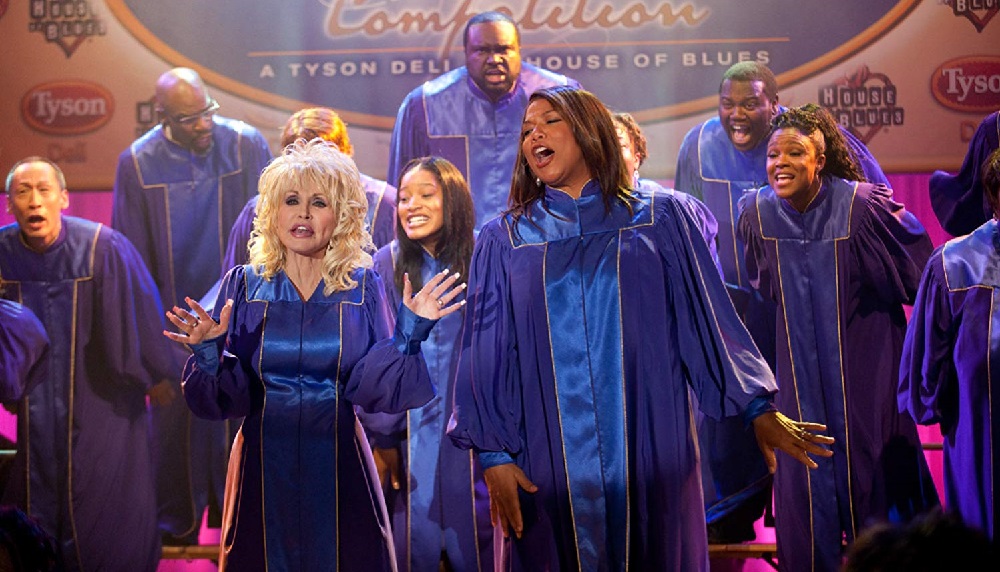 In the small town of Pacashau, Georgia, the Divinity Church Choir is the song the struggling inhabitants of the berg love to sing in order to raise their spirits and keep them from dwelling on the economic hardships threatening their community. But when longtime director Bernard Sparrow (Kris Kristofferson) dies of a heart attack and the church council chooses Vi Rose Hill (Queen Latifah) instead of his vivacious and outspoken widow G.G. (Dolly Parton) to lead it, their feud threatens to derail things as the group heads to the Joyful Noise competition in Los Angeles. 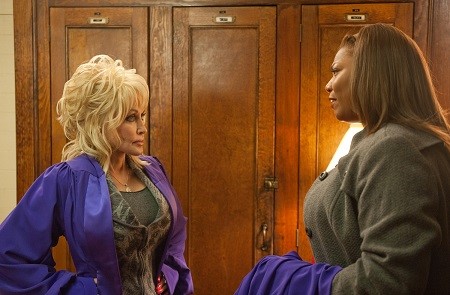 Complicating things is the arrival of G.G.’s rebellious grandson Randy (Jeremy Jordan), a young musician who is immediately smitten with Vi’s sexy and talented 16-year-old daughter Olivia (Keke Palmer). This volatile mix has the potential to destroy the choir and keep them out of Nationals, derailing the hopes of the entire town as they breathlessly pray for the Divinity Church Choir to find success.

I will say I wasn’t looking forward to Joyful Noise. While I did enjoy writer/director Todd Graff’s previous efforts Camp and Bandslam, the trailers for this one had me holding my nose in revulsion, the whole thing looking more like a Sister Act meets “Glee” meets second-rate Tyler Perry knockoff I didn’t want to watch even a minute of.

In retrospect this reaction to a preview was both unkind and improper on my part, and I definitely know better than to let my preconceptions (sometimes you can’t help but have them) color my reactions before I sit down to watch the actual motion picture. While not the film his previous two features were, Graff’s third effort isn’t half-bad. Granted, considering that the film is also half-terrible I’m not entirely certain that ends up being a good thing. The movie operates in a realm between good and bad that left me unhappily pondering what might have been, and while there is enjoyment to be found here that doesn’t quite mitigate the parts that are disappointingly frustrating.

Much like Bandslam, Joyful Noise is smarter and has more on its mind than its thinly familiar premise alludes to. Graff wants to talk about what is going on in the small corners of the country, wants to tackle issues regarding economic disparities and how the tiniest glories have the potential to fuel hope within an entire community. More than that, Vi Rose and G.G. are more complicated people with more intricate lives than I ever imagined they’d have entering the theatre, their respective stories having noticeable weight that’s initially intriguing.

But Graff doesn’t entirely avoid cliché and doesn’t go out of his way to avoid a whole plethora of stereotypes. He embraces far more platitudes then is satisfactory. The romance between Olivia and Randy is so saccharine I think it gave me tooth decay. A secondary subplot revolving around Vi’s Asperger’s afflicted younger son for all its good intentions borders on detestable. Side stories concerning members of the choir tread robustly into Tyler Perry territory, most of them so smarmy and schmaltzy I wanted to pound my head against a granite wall. 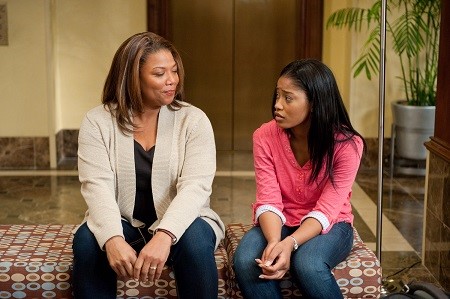 Even so the final concert is terrific, and while it offers up zero surprises it’s so enthusiastically staged and sung it’s easy to forgive the Rocky aspects of what is happening. Graff doesn’t over-edit, allowing for a visual simplicity that keeps what is happening from becoming a visual blur. There’s an old school 1930’s élan to these climactic musical numbers that’s endearing, and while very few will probably notice any of that those who do will find undoubtedly be a wee bit pleased.

I have a decided love-hate relationship with Joyful Noise. I’m unhappy that Graff goes for the easy tears, that he stoops to setting up exaggerated moments between a lonely wife and her estranged Army officer husband in order to try and make the audience cry. While the music is incredible, and while all the actors can sing, not all of them can act (particularly Jordan), and the differences between Latifah (who throws her all into this), Parton (who could play this sort of homespun darling in her sleep) and the remainder of the cast is exasperating. When the movie does sing it hits a number of heavenly notes. Sadly it just doesn’t hit enough of them to make the movie as a whole anything more than a musical prayer that’s vexingly left unanswered. 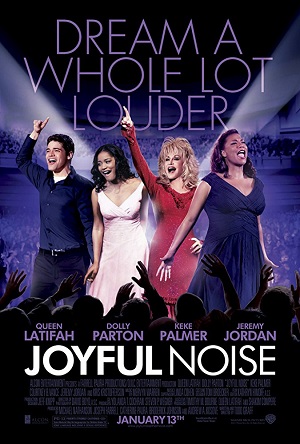