Time has passed since 15-year-old Mindy Macready, a.k.a. Hit Girl (Chloë Grace Moretz), saw her real life superhero father Big Daddy murdered and subsequently aided teenage upstart Dave Lizewski, a.k.a. Kick-Ass (Aaron Taylor-Johnson), unleash deadly justice against the perpetrator, mob boss Frank D’Amico. While he’s been forced to hang up the mask she’s still moonlighting as her vigilante alter ego, doing so right under the nose of caregiver, and her dad’s former partner, Detective Marcus Williams (Morris Chestnut). Bored with being normal, looking to get back into the game, Dave convinces Mindy to start training him, certain that the two of them together, working as a team, can clean up the streets in ways the city’s police department never could. 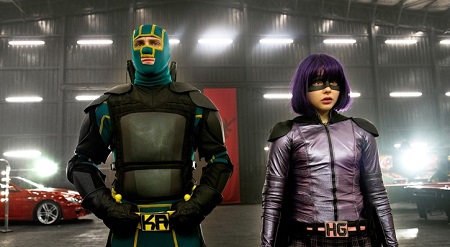 When Marcus discovers what they’ve been up to he puts the kibosh on Hit Girl, forcing the teen to return to school and deal with the things a young woman her age should be struggling with, like boys, cliques and passing algebra, not patrolling the streets for evildoers. But Dave doesn’t want to stop, quickly finding a new group of erstwhile superheroes to hang with. The team, calling themselves Justice Forever, is led by a former mafia enforcer, now Born Again Christian, calling himself Colonel Stars and Stripes (Jim Carrey), the group forming a tightknit friendship as they volunteer at soup kitchens and bring down drug dealers while attempting to maintain humdrum personal lives.

That’s the basic setup for Kick-Ass 2, the sequel to the 2010 mini-success based on the comic series by Mark Millar and John S. Romita, Jr. and directed by Layer Cake and X-Men: First Class filmmaker Matthew Vaughn (returning as a producer). Obviously it gets more complicated than that, D’Amico’s whiny brat of a son Chris (Christopher Mintz-Plasse) getting in on the action by choosing to become the city’s first supervillain assembling a like-minded cadre of cutthroats to help him see Kick-Ass meet a grizzly end.

Thing is, while the action is well staged, while there are laughs, while Moretz once again dominates in ways both fiendishly spectacular and morally queasy, this second chapter in the Dave Lizewski saga isn’t anywhere near as interesting as the first one was. The fine line that Vaughn and company attempted to walk is blurred considerably, incoming writer/director Jeff Wadlow (Cry_Wolf) more interested in embracing the more exploitive aspects of the narrative instead of having a discussion about the ethically complex societal constructs the existence of these real-life heroes generates. He revels in the blood splatter, lets loose with the ultra-violence, letting things culminate in a showdown between teen boys with daddy issues instead of anything even remotely substantive.

I can’t help but feeling a bit like a hypocrite having issues with this. Next week I’m going to heap massive amounts of praise on You’re Next, a seriously nasty and abhorrent bit of slasher horror that slices and dices through its cast with wild, gleeful abandon. It’s not like that movie is chockfull of social commentary, the filmmakers more than content to devilishly toy with the audience and their knowledge of the genre in ways that are disturbingly vile. Yet, I’m going to call it fun, playful and, most of all, entertaining, its whip-smart script and confidently assured direction helping make it one of 2013’s most surprising gems.

So why am I okay with films like that (my love for horror, all kinds, all types, is well documented), where human life is treated with as much respect as an ant being squished by a big black boot, and yet find myself having gigantic problems with a purposefully cartoonish action extravaganza such as Kick-Ass 2? I think the issues arise in that, in many ways, this is a sequel that wants to have its cake and eat it to. It wants to set up a world not all that removed from the one in which we actually live in, one where actions do have consequences, where individuals slapping on spandex and wearing masks in an attempt to combat villainy can both kill and be killed. At the same time, it wants to embrace the silly, to have poop and fart jokes, to send up the Justin Biebers of the world and craft a pseudo Mean Girls teenage world where boys, clothes and makeup are all that matter. It wants to have a 15-year-old heroine take down cadres of a baddies with the quickness and speed of a ninja, all the while not particularly caring that she’s slowly become even more of a sociopathic psychotic than she ever was in the first film (which is saying something). 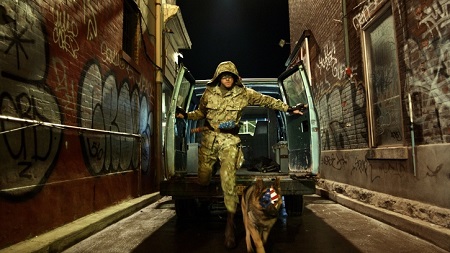 I feel like I’m doing a horrible job coalescing all of my thoughts. To be fair, I did not hate this sequel. As stated, the action sequences are extremely well staged and there’s some great supporting work turned in by Carrey (his current stance on the film and his presence in it notwithstanding – he’s now saying he regrets his participation – he’s still mesmerizingly terrific), Donald Faison, Olga Kurkulina and a sublime John Leguizamo. My general unease with the character aside, Moretz once again steals the spotlight as Hit Girl, scenes of her initially dealing with teenage girl world and its myriad landmines close to glorious. I do also appreciate the absurdist tone and the all-pervasive darkness at the center of the comedy, and even if subtlety isn’t exactly his strong suit I still value that Wadlow understands the gritty nastiness pulsating underneath all this glossy superciliousness.

But that doesn’t mean I liked Kick-Ass 2 or would ever take the time to watch it again. The subtext that at least made the first film an intriguing curiosity has been diluted to insignificance, and the disgust I felt while absorbing many of the images thrown upon the screen was not something I find myself wanting to relive. To me, the sequel just came across as being exploitive just for the sake of being exploitive, and as such I fail to see the point and wonder why anyone, anywhere would be entertained by any of this.