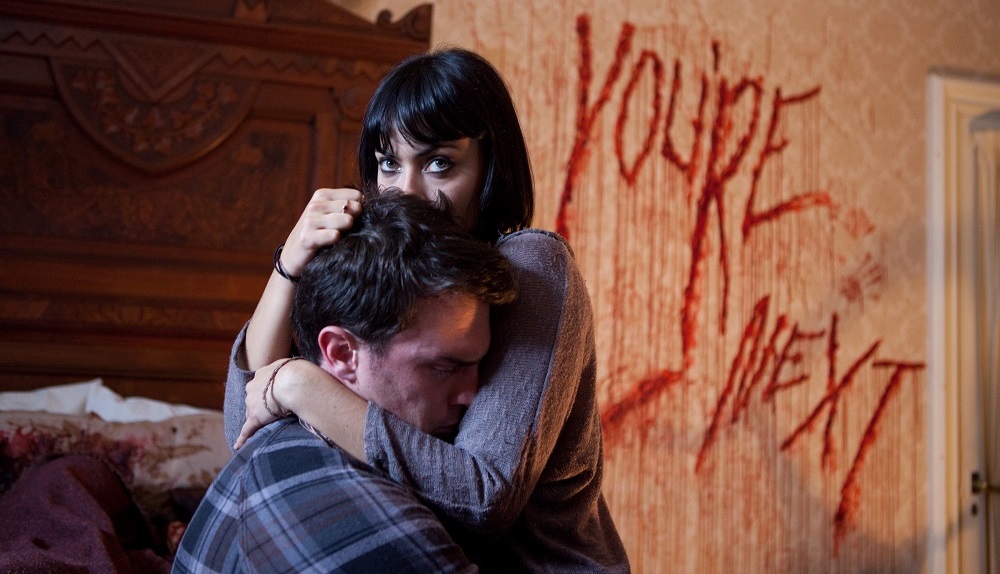 Playfully Subversive Next a Grisly Lark

College professor Crispian Davison (AJ Bowen) has brought his young, ex-student girlfriend Erin (Sharni Vinson) home to meet the folks. His parents Paul (Rob Moran) and Aubrey (Barbara Crampton) are celebrating their anniversary, and they’ve invited all of their children up to their secluded New England home to join them for a reunion. Spoiled sister Aimee (Amy Seimetz) is there with her latest beau, Tariq (Ti West), as is egotistical eldest Drake (Joe Swanberg) and his haughty wife Kelly (Sarah Myers). Rounding things out is youngest, Felix (Nicholas Tucci), his Goth girlfriend Zee (Wendy Glenn) straggling along behind looking as if she’d rather be someplace else. 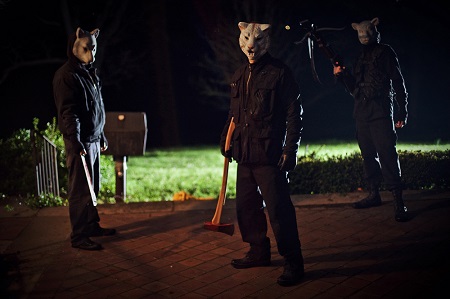 At first things go as you’d expect. The bickering, the joking, the prodding, the jabs at one another’s weight, career choices, ambitions, desires, failures, etc., etc., all of it at one point or another being spat out across the lavish table. But things take a turn when arrows begin to fly through the windows, destruction and dismemberment following in their wake. Seems a trio of masked killers is outside seemingly intent on massacring the family one by one until none are left, and if the Davisons can’t put their petty squabbles and insignificant insecurities behind them then they might as well give themselves up for sacrifice and hope death is quick.

You’re Next is not your typical home invasion horror-thriller. Filled with inventive twists and turns, showcasing a heroic transformation that would cause both Jamie Lee Curtis and Sigourney Weaver to rise to their feet in unabated cheers, the movie is a witty, gory and unexpectedly exciting hoot filled with scares and laughs aplenty. It doesn’t so much break genre convention as it uses inherent clichés against the audience in ways that feel fresh, oftentimes invigorating, everything building to a rousingly, if suitably cynical, blood-thirsty climax I by all accounts adored.

Director Adam Wingard and writer Simon Barrett are probably best known for being two of the minds behind the V/H/S franchise, but that 2012 cult favorite and its superior 2013 sequel are only part of the story. They also made the 2010 mumblecore serial killer horror entry A Horrible Way to Die, and while the film was far from perfect it showcased an assured directorial talent and a confident storyteller working in tandem to play with genre and expectations in ways that were uncomfortably exciting. 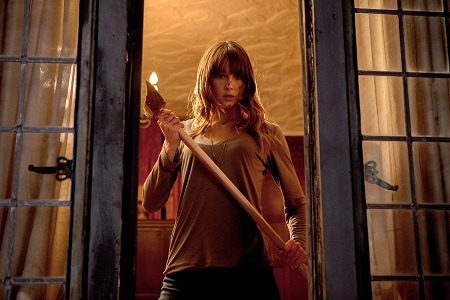 The pair ascend to the next level here, their careful and meticulous deconstruction of the home invasion thriller coupled with their fresh take on slasher film clichés combing to make You’re Next one of the summer’s most unabashed, if gruesomely sadistic, surprises. It’s a fun romp, watching one survivor rise to the challenges presented while the surviving members of the Davison clan crumble into self-doubt and insecurity a singular hoot. None of the characters are what they appear to be, making the stupidity behind a great deal many of their actions not as ludicrous and as laughable as they might initially appear.

Vinson steals the show. The unexpected focal point of much of the life or death activity going on inside the house, the Aussie actress gives Erin shadings and layers the script can only hint at but not take the time to flesh out in great detail. Who she is and why she is so able to think rationally just as chaos erupts around her is a mystery worthy of garnering answers to, Vinson revealing little facets of Erin’s personality and her history only as required amplifying her emotional journey in the process. It’s a confident performance, direct and confident yet also laced with just the proper amount of uncertainty, mania and fear, the actress going all out in order to make her character one of the more complex and intriguing female figures we’ve seen this summer.

In many ways You’re Next is an all-too-easy movie to say too much about. Even talking about Vinson and her character takes away some portion of surprise, my waxing poetic about the performance insinuating Erin lives a bit longer than most of the others do. Worse would be if I were to dive into the layers of subtext and subterfuge buried (not all that deeply, but still under the surface) within Barrett’s intricately constructed script. Heck, even the best bits, many of which or amazingly quotable, of dialogue would require a spoiler warning if I were to repeat them, and while nothing that happens is hardly groundbreaking or new that doesn’t make any of it less enjoyable.

Bottom line? You’re Next, a movie Lionsgate has been for whatever reason sitting on for almost two years, waiting for what they felt was the best release date, is another genre effort this summer that, along with The Purge, Grabbers, V/H/S 2 and The Conjuring proves horror isn’t as dying a cinematic breed as some might think. More so, it’s arguably the best of the lot, the finished product a grisly lark ranking as one of 2013’s finest achievements. 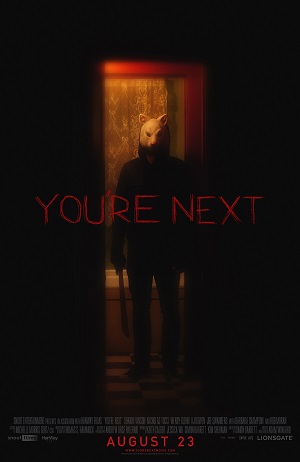