Surgeon Steven Murphy (Colin Farrell) is compelled to take care of teenager Martin (Barry Keoghan). The two of share a history, a past tragedy linking them together. Thinking it would do the boy good, Steven decides to introduce him to his family, ocular surgeon wife Anna (Nicole Kidman) and their two children, eldest Kim (Raffey Cassidy) and her younger brother Bob (Sunny Suljic). Martin, as strange as he is, ingratiates himself with the Murphys, especially Kim, the two appearing to be heading towards teenage romance as far as the normal signs are concerned. 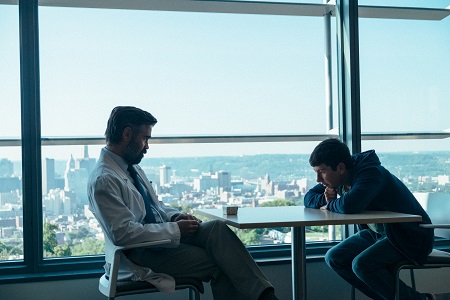 But things are about to get strange. At first, Steven thinks Martin wants him to get involved with his lonely mother (Alicia Silverstone), forcing him to spend a night with her eating a home cooked dinner and watching old movies. Yet things proceed to get worse. First Bob becomes paralyzed from the waist down. Next he refuses to eat. Soon Kim follows suit, both children now in the hospital, a team of physicians running every test in the book, all of them stumped as to what is going on and why. But Martin knows, and he gives Steven an ultimatum, claiming that if he doesn’t do what he asks then every single member of the doctor’s family will all succumb to the same illness, the end result of which will be a most painful and gruesome death.

Considering The Killing of a Sacred Deer is sprung from the mind of director Yorgos Lanthimos, working once again with frequent writing partner Efthymis Filippou, it should come as no surprise that this bit of bizarre comedic stylized whimsy turns out to be so much more than initial appearances would likely lead the viewer to believe. After all, we’re talking about that the guy who crafted Dogtooth and The Lobster, so the fact this latest piece of unhinged craziness ends up descending into creepily terrific psychological horror isn’t a surprise.

Watching it get there, however? That’s filled with a number of surprising twists and turns, each one building upon the next in order to cast a terrifying spell that grows more insidious and despicable as events spiral towards their inevitably chilling conclusion. Lanthimos uses expectation and convention against the viewer, pulling the rug out from underneath his audience by having his characters act in ways that feel like they should be nonsensical and yet, in the context of the emotional and psychological whirlpool he’s built into a swirling tempest, the pieces oddly fit together perfectly. It’s comedy transformed into drama transformed into social commentary transformed into full-blown psychological horror, all of it heading down a gruesome path of vengeance, regret and tragedy guaranteed to induce sickened shudders in even the strongest of constitutions.

Farrell and Kidman kill it as Steven and Anna, the two veterans delivering performances that go well beyond the staccato dynamics of the dialogue and the rigid visual formality that Lanthimos initially imposes upon them and the rest of the cast. Together, they manage to weave their way through things with shocking immediacy, cutting to the heart of this Sophie’s choice scenario with heartbreaking exactitude.

Kidman, in particular, is stunning, a late scene where she debases herself with cunning meticulousness while her character attempts to manipulate Martin into revealing more of what is going on and why he’s toying with her children is absolutely phenomenal. The actress finds emotional recesses that are epic in their subtle complexity, the way she uses every muscle in her body to augment all Anna is feeling throughout this sequence sending a chill up my spine that restlessly sat there throughout the remainder of the film. Kidman cements her status as one of the great, and arguably more unappreciated (even with an Oscar and three additional nominations to her name) actresses of our time, the look passing between her and Keoghan near the story’s end an ocean of emotional wreckage that brought an authentic tear to my eye. 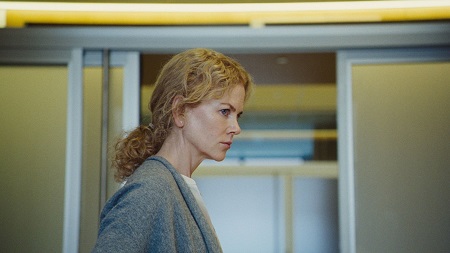 Lanthimos’s latest does take some dissecting. It’s also exceedingly difficult to warm up to, its cold, clinical austerity purposefully keeping me at arm’s length for a good portion of the narrative. But much like Stanley Kubrick’s Eyes Wide Shut, Barry Lyndon or The Shining, the longer I watched the more I wanted to know more. Even if I had wanted to try, I was so wrapped up inside the drama assaulting Steven and his family there was no way I was going to move from my seat. Thimios Bakatakis’s (The Lobster) uncomfortably sterile camerawork is a smooth, unfussy descent into visual madness, all of which augments the emotions Lanthimos is stirring up to an even greater degree.

What’s the point of it all? On that question I do not have an answer. Weeks after the press screening, I find myself still pulling apart bits and pieces of this tale, trying to scour through every last grain of narrative sand in order to find the meaning to all of what Lanthimos and Filippou have composed for me to obsess over. Yet The Killing of a Sacred Deer isn’t a movie designed to be broken down into 140-character reactions. Instead, this two hours of psychosomatic carnage wants to linger in the psyche as long as it can, provoking a nightmare of uncertain dread that will last all through the night, into the next morning and well into a futuristic beyond seemingly without end. 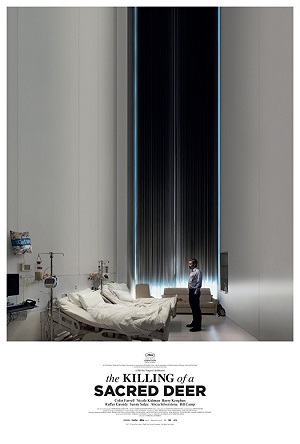