Panda Po (voiced by Jack Black), the fabled Dragon Warrior and fun-loving leader of the Furious Five made up of fearless warriors Tigress (Angelina Jolie-Pitt), Monkey (Jackie Chan), Mantis (Seth Rogen), Viper (Lucy Liu) and Crane (David Cross), is perplexed when his teacher Master Shifu (Dustin Hoffman) states he will no longer be training the group. Instead, it will be up to Po to do this, proclaiming the task must fall to the chubby bear if he is ever going to live up to his full potential and unlock the mysterious power of Qi (pronounced “chi”). 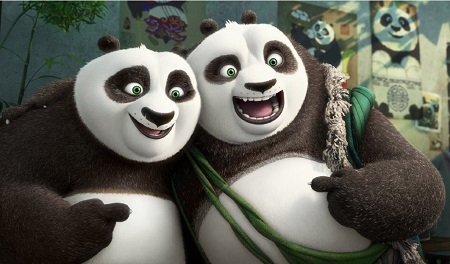 As strange as this might initially appear, Shifu’s intentions are never allowed the chance to blossom thanks to a pair of unexpected events. The first is the arrival of Po’s long-lost father Li (Bryan Cranston), revealing to his missing son the existence of a hidden panda sanctuary while also offering to take him there so he can meet more of his species. The second is the appearance of warrior Kai (J.K. Simmons), a former friend turned enemy of the late Master Oogway (Randall Duk Kim), emerging from the mysterious Spirit Realm to destroy the Furious Five, defeat Master Shifu and steal the power of Qi from all the remaining pandas living within their mountain sanctuary.

This is Kung Fu Panda 3, the supposedly final step in the story of Po, the Dragon Warrior tasked with facing down his most imposing adversary yet while also discovering things about his abilities he heretofore didn’t know existed. At the same time, he also learns, not only does his father still live, but so does an entire village of fellow pandas, he and his adopted father, the noodle-selling duck Mr. Ping (James Hong) journeying to this isolated mountain hideaway, absolutely astonished by what it is they find.

It’s a lot for Po to deal with, and considering our furry hero has never been the best at being able to focus, it’s understandable that all of this has him more than a little flustered. Thing is, even with so much going on that’s ripe in dramatic, character-driven comedic potential, it takes some time before this third entry in the popular animated series finds its footing and begins to click on all cylinders. Thankfully, when it does, it is right when it needs to, the last 30 minutes building up to the rousing, energetically exuberant climax so wonderful they end up making the initial, unfocused missteps of the early portions barely even matter.

But there’s a lot of shaky ground here, and it’s difficult not to notice it. Kai’s villainous plan is fairly ephemeral and nondescript, and other than wreaking a lot of havoc and stealing the Qi of all the kung fu masters he defeats – while also transforming them into his mindless jade-colored slaves – there’s not a lot to what he wants to do. More, Li’s introduction to all of this is relatively amateurish, feeling more like something out of a sitcom than a major motion picture. It also seems like it takes Cranston a little bit of time to get a handle on the character and what it is he’s hoping to do with him, and as great as it is to hear him tap back into his comedic side it’s not until the pair end up in the supposed safety of the secret panda village that the actor begins to find his groove.

Yet, the pre-credits opening featuring Kai and Master Oogway in the Spirit Realm is spectacular, setting a tone I had trouble believing any other portion of the film was going to be able to equal let alone top. Happy to say, not only does this happen, it does so at the perfect time, right at the end, the last act of the film truly sublime. Not only is it marvelous from an action perspective, it’s also sublime from a character-driven one as well. From Tigress accepting Po as a teacher, to his maturation as a mentor to an embarrassment of pandas, to his willingness to make what can only be described as an ultimate sacrifice to defeat Kai, all of it works, every second, even to the point I wanted to stand up cheer by the time the fight had come to its end.

Somewhat surprisingly, it all begins with James Hong. Not only have returning screenwriters Jonathan Aibel and Glenn Berger done right by Po’s adoptive father Mr. Ping, giving him the majority of the best gags and biggest laughs, they’ve also given the veteran character actor the most complex and heartfelt emotive beats as well. It is his realization as to what family means, what being a parent and father is all about, that gives his son the belief that he can not only train the villagers, but also stand up to Kai. He does this by working directly with Li, the two males putting their differences aside in order to do what is best for their son, and in so doing work a type of magic that touched my heart while also bringing on a handful of honestly earned happy tears.

There’s no denying that this third chapter in Po’s saga cannot hold a candle to the 2008 first film that got the good-natured panda’s story rolling; and I can’t help but wish the initial first couple of acts of this third tale could have been a little more focused and felt a little less fractured, than they ultimately did. But there’s no denying that Kung Fu Panda 3 concludes on a definite high note, filled with eye-popping animated set pieces as well as thrilling story beats that I was perfectly entertained by. If it is the end of the road for this particular hero, he certainly goes out a winner. In other words, this sequel is a total Skadoosh! and there’s not a heck of a lot more to add. 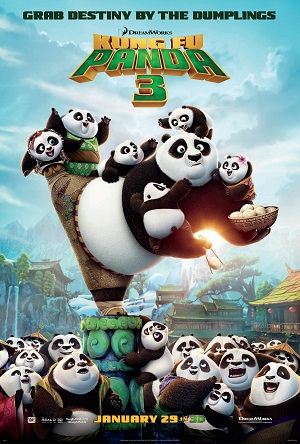