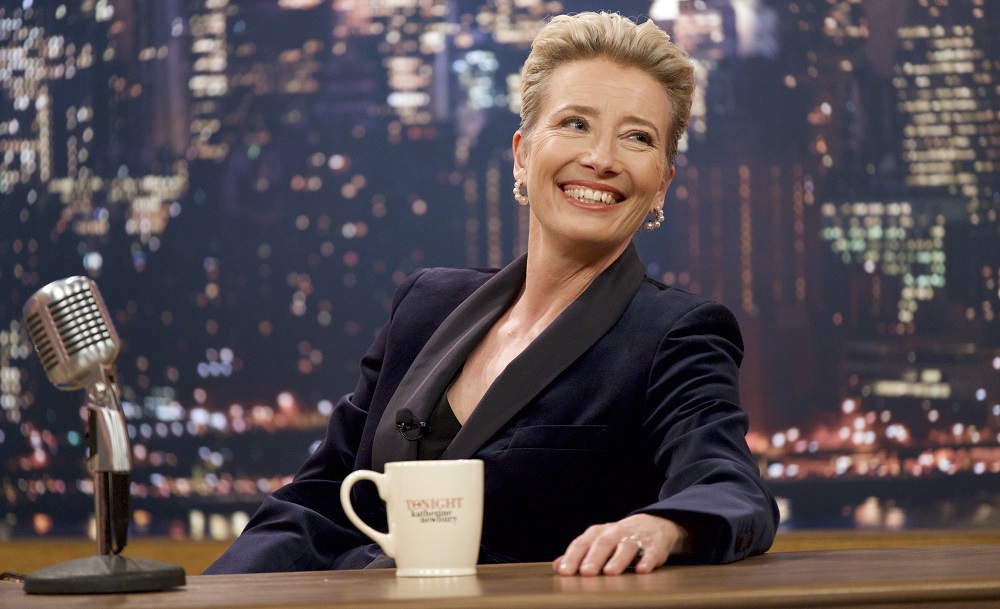 Late night talk show host Katherine Newbury (Emma Thompson) is a television icon. She has been an on-air staple for almost three decades winning countless awards as she has busted through barriers few other women in the entertainment industry ever have. But her ratings have been on a steady decline for a few years, and much to the consternation of her trusted executive producer (Denis O’Hare) she cycles through staff writers as if she could go pick a new one up at the local supermarket. Additionally, once it is pointed out to her that she has no women or people of color on her staff, Katherine determines the next person she hires must check both boxes on that checklist otherwise they don’t even warrant an interview.

Enter Molly Patel (Mindy Kaling). She has no experience. She has no comedy training. Her previous just was working as an efficiency expert at a Pennsylvania chemical plant. But Molly’s also quick-witted and shows a sharp intellect, and while Brad normally wouldn’t let someone like this through the front door, what with Katherine’s edict about hiring a woman of color as a new writer this just happens to be her lucky day.

Thus begins Late Night, an exceptionally funny little comedy featuring a bravura star turn from Thompson that’s absolutely incredible. Written by Kaling, director Nisha Ganatra’s (Cake) comedy also has a lot more on its mind than just being a television-centric spin on 2006’s The Devil Wears Prada. The narrative kicker around which the majority of the plot revolves around involves network executive Caroline Morton (Amy Ryan) letting Katherine know she is going to be replaced at the end of the current season. She, of course, doesn’t take that news particularly well, the industry legend deciding she’s willing to do whatever it takes to make herself relevant again in order to make it impossible for the network to let her go.

Molly finds herself in the middle of this maelstrom, and just when she’s trying to figure out how to fit in amongst the very white, and very male writer’s room, she now has to navigate being the sole voice willing to speak up to Katherine and to tell her an honest truth. It is their parallel journey that powers the film, each woman learning how to evolve, and maybe even become a better person, as they interact with one another during this stressful time. Through them concepts of gender politics in media, racial discrimination, ageism and the evolutionary nature of comedy (amongst other topics) are discussed, Molly the audience’s eyes and ears as things progress to a conclusion.

The movie is both funny and intelligent, Kaling’s insightful script obvious in its plot and character dynamics yet still manages to dig fairly deep emotionally all the same. The first two-thirds is wonderful, and even if there’s never a doubt that Molly will learn what it takes to be a confident writer or that Katherine will rediscover the passionate imagination that made her a comedy giant, the whole thing is still so gosh darn enjoyable I found it difficult to care that there weren’t a lot of surprises. Even though events had a sitcom pitter-patter as far as dialogue and plot constructions were concerned there is still an elegant naturalism to the way in which Kaling as structured things. Additionally, Ganatra’s direction is smoothly dexterous as she bounces back and forth between the two women, events having an intelligently ebullient buoyancy I found infectious.

Why I do think some of the supporting players (other than a divine John Lithgow as Katherine’s musician husband dealing with the effects of Parkinson’s Disease) aren’t used particularly well, most notably Hugh Dancy as one of the writers who shows Molly some affection but also hides a fairly substantial secret that puts her job in jeopardy, its that final third of the story that I find most troublesome. For a movie that is so smart, that understands its characters and their issues so clearly, that so obviously longs to make subtly damning statements about the state of corporate-owned media as it exists today, the climactic stretch is nothing more than a rose-colored fairy tale. This is disappointing in a myriad of ways, not the least of which is that it significantly lessens the emotional impact of what both Katherine and Molly have just gone through. Unlike everything else in the film these final moments feel false. Worse, they don’t feel especially justified are deserved, and while it’s nice to see people I’d grown to care about get a potentially happy ending, I’d rather they get there in a way that felt genuinely authentic and not cloyingly facile.

I still found it close to impossible to walk out of the theatre with anything other than a smile on my face after Late Night came to an end. Thompson gives another superlative performance, one that is far more than a few withering glares, cutting remarks and pithy comebacks. She opens up Katherine’s chest and reveals the wounded heart beating inside her chest, the Oscar-winning actress having a handful of moments of such nakedly raw power I was blown away by the majesty of her magnetic turn. Like the character she portrays rules her evening talk show, Thompson towers over this movie with a stunning magnificence that’s extraordinary, and when I watch it again in the future I will do so entirely because of her. 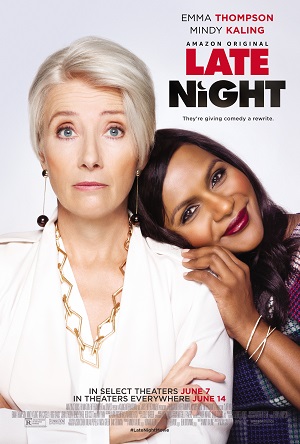