I really liked The LEGO Movie, that inspired 2014 marvel a deft blend of comedy and social commentary that worked pretty much perfectly for viewer’s of every age. With a direct sequel not slated to hit theatres until 2019, Warner Bros has instead chosen to make sure the series remains current by producing a handful of spinoffs, the first of which being this week’s whimsical, self-aware The LEGO Batman Movie. While nowhere near as awesome as its predecessor, it’s still a fun, imaginative and frequently hilarious bit of pop culture comic book craziness, and while the cartoon’s staying power is marginal the entertainment value while sitting in the theatre is still relatively high.

There’s actually a little bit more plot here than I initially anticipated. Batman (voiced by Will Arnett) has gotten so good at saving Gotham City from The Joker (Zach Galifianakis) and his never-ending army of colorful minions and co-conspirators that Commissioner Gordon (Hector Elizondo) and the police under his command have seemingly forgotten how to do their respective jobs. This changes, though, when he retires and hands over the reins to his determined daughter Barbara (Rosario Dawson), and she’s set on doing things by the book, and that includes putting the criminals behind bars and not to keep allowing a masked vigilante to do the job for them.

But that’s not the worst of it. First of all, while wandering around as his alter ego Bruce Wayne, much to the delight of his fatherly butler Alfred (Ralph Fiennes) the Dark Knight inadvertently adopted energetic orphan Dick Grayson (Michael Cera). On top of that, The Joker, tired of Batman’s refusal to recognize him as his most fearsome enemy, has launched a plan that will lead to the hero’s humiliation and Gotham City’s destruction, counting on the fact his adversary’s massive ego won’t allow him to see what’s really going on until it’s far too late.

The opening credits sequence is flat-out brilliant. There’s also a superb montage of Batman movies past that encapsulates the Caped Crusader’s cinematic journey rather magnificently. My favorite set piece might have been when Batman arrives Superman’s (Channing Tatum) Fortress of Solitude expecting to find the Man of Steel stewing in his own superheroic angst only to discover the entire Justice League getting the groove on without him. But there’s also one involving The Joker in the Phantom Zone (don’t ask how he gets there, he just does) chatting up a cadre of movie, television and literary villains that’s downright absurd, so to say I adored it would be a huge understatement.

More than any of that, though, this satirical jolt of comic book craziness also wants to talk about family, togetherness and the price of unfiltered, unchecked ego. It’s a movie that prizes teamwork, especially as it pertains to the ability to see one’s gifts and strengths in order to utilize them to the best possible advantage, showing that when everyone comes together as one the impossible becomes possible and the unachievable can be achieved. It’s surprisingly intelligent and complex, and while the story itself is a fractured, episodic bit of nonsense the characters themselves continually amaze for their multifaceted intricacies all the same.

Even so, I can’t say The LEGO Batman Movie lasts in the memory all that long. As enjoyable as it all might be, there are more than a few noticeable dry spells along the way towards the finish line, and some of what transpires is just too frenzied and chaotic for things to be able to pack the kind of wallop The LEGO Movie did. Even so, director Chris McKay, he of “Robot Chicken” fame, and his crack team of animators do stage a number of eye-popping set pieces, not the least which is a the massive final showdown that’s spectacularly absurd. As spinoffs go, this one has more than its fair share of super moments, and with so many seemingly sturdy building blocks in place I’m curious to see how the studio will continue to piece these LEGOs together in the future. 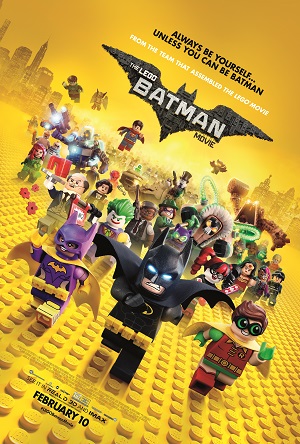