In Ninjago, every day is the perfect day for the evil Garmadon (voiced by Justin Theroux) to attack with his mechanized shark-themed forces in an attempt to take over and rule the city. Standing in his way each and every time are a team of mechanized Ninjas, all given codenames representing the Earth’s elemental powers like Water, Lightning and Fire. Unbeknownst to this evil warlord, his own teenage son Lloyd (Dave Franco), a.k.a. Green Ninja, is the leader of this force, his best friends from High School, in reality his only friends thanks to being the son of the “Worst Guy in the World,” Cole (Fred Armisen), Jay (Kumail Nanjiani), Kai (Michael Peña), Nya (Abbi Jacobson) and Zane (Zach Woods) the other members of the team.

Going against the orders of the group’s wise teacher Master Wu (Jackie Chan) and fed up that his dad, as evil as he might be, refuses to recognize him as anything other than an afterthought and rarely as his son, Lloyd unleashes the Ultimate Weapon. Unfortunately, that brings the giant cat Meowthra to Ninjago, destroying everything in its furry wake. Now, forced to join forces with Garmadon, Master Wu and the young ninjas head into the forbidden forest in order to find the Ultimate Ultimate Weapon, needed to drive this monstrous new threat from their beloved city. As they make this dangerous trek, all of the ninjas learn things about one another they never knew beforehand, while Lloyd and his evil father discover a familial bond that very well could change the course of both their lives forever.

After the massive success of The LEGO Movie in 2014, it’s no surprise that Warner Bros was going to do all they could to milk that box office cow as frequently and as often as they could. Just this past February we saw the successful release of The LEGO Batman Movie, that animated comedy earning solid reviews and audience raves in pretty much equal measure. Now comes The LEGO Ninjago Movie, inspired by the long-running “Ninjago” animated television series, and from my understanding far more comedic and ridiculous than the show is. It’s going to be a pretty substantial hit, just like its predecessors. More importantly, it’s actually pretty darn terrific, too.

Featuring a story and script credited to nine different writers, asking for any sort of narrative cohesion here isn’t a good idea. Same time, like a great piece of sketch comedy, all of the numerous vignettes feeding the central storyline are so consistently amusing the fact all of this goes way beyond nonsensical into the realm of outright absurdity isn’t as big a problem as it might otherwise have been. The jokes fly fast and furious, both verbal and visual (there’s even a Locke gag), and it will likely take multiple viewings to even begin to catch the majority of them. I admit to having a giant grin on my face all the way through, even during the live-action prologue featuring Chan as a kindly shopkeeper telling a tale of heroism, sacrifice and forgiveness to a wide-eyed youngster. The movie is just a heck of a lot of fun, and to my mind is an even more successful piece of family-friendly pop entertainment than The LEGO Batman Movie ended up proving to be.

I love the vocal cast, especially Chan, Franco and Theroux. They all appear to be having a blast bringing these characters to life. Better, their energy and excitement jumps off the screen. Theroux, in particular, is a total hoot. The stuff he says (as well as the way he says it) is consistently hysterical, some of his off-the-cuff asides worthy of a gigantic belly laugh all by themselves. But the whole cast has their moments, especially Jacobson and Nanjiani, while Olivia Munn has a grand time portraying Lloyd’s bubbly overprotective mother Koko, a confidently determined woman with a superheroic past all her own.

It’s all undeniably silly, and some of the extended gags lose a little of their punch as the film progresses, most notably a joke involving Garmadon’s never-ending series of generals getting fired out of a volcano for not coming up with good ideas for world domination. But visually there’s so much going on there was always something that drew my attention in a positive way, and I honestly feel like this latest LEGO offering is the most fantastically and imaginatively animated one yet. The LEGO Ninjago Movie made me giggle, start to finish, and to my mind saying anything more than that just isn’t necessary. 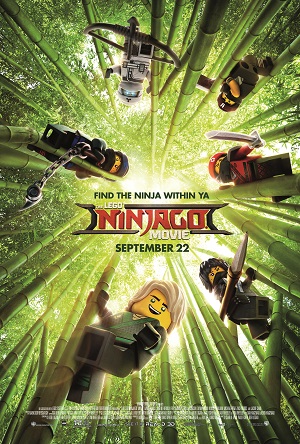