The Civil War is coming to an end. President Abraham Lincoln (Daniel Day-Lewis), just elected to a second term, knows this. So do his most trusted advisors, individuals like Secretary of State William Seward (David Strathairn). The South will surrender, and as General Ulysses S. Grant (Jared Harris) and his army inch closer to victory, the bloodiest conflict in the history of the still-young United States of America will soon be over.

This is why Lincoln knows that the 13th Amendment to the Constitution must be affirmed by the House of Representatives now before the lame duck session ends. With the war over, a Constitutional outlawing of slavery may not be possible, and with legal questions regarding the validity of the Emancipation Proclamation at Gettysburg still lingering, the President feels this question must be settled before the Confederate Army surrenders.

Inspired by historian Doris Kearns Goodwin’s landmark Team of Rivals: The Political Genius of Abraham Lincoln, director Steven Spielberg’s long-gestating Lincoln finally makes its way to the multiplex delivering a sobering story of determination and heroism belying its stodgy Capitol Hill and White House settings. Fitted with a magnificent script by Tony-winner and Academy Award-nominee Tony Kushner (Munich, Angels in America), the Raiders of the Lost Ark and Schindler’s List filmmaker has delivered his most restrained and minimalistic effort in eons, at least since Saving Private Ryan, probably since Sugarland Express.

High praise? It’s meant to be. Lincoln, not without a few missteps to be sure, is superb. More than just an important piece of history, the film is an enthralling sojourn into the mind of a leader driven to keep his nation intact and willing to do virtually anything to ensure those all residing within its borders achieve equality. There is excitement here, drama and humor, too, each facet of the narrative building to a climax of personal responsibility and self-determination that’s extraordinary.

Day-Lewis is unsurprisingly awesome. His performance is a sublime and cagey mixture of heart, hokum, moxie, and grit, the actor disappearing inside the role so fully that everything he’s done before, every Oscar-winning performance, vanishes completely. There are scenes where I did not know what he was going to say next or what was on the forefront of his mind. His Lincoln is a leader and a father, a caregiver and a seducer, a lion and a mouse, Lewis magnifying each trait when it best serves the given moment. Day-Lewis does no wrong, and there was never a second I could pull my eyes off of him.

Spielberg and Kushner have found modern parallels to current events only the most clueless amongst the viewership will refuse to notice. Much like the now re-elected 44th President managed with the automotive bailout and with the Healthcare Reform Law (i.e. Obamacare), Lincoln fought hard for the 13th Amendment even though he knew doing so was wildly unpopular – even within his own Republican Party.

But he also knew that if he didn’t get it passed at this precise moment, at a time before the war ended and while a bevy of Democrats still retained their seats, it likely wouldn’t get passed at all. He used his political capital garnered from his re-election to get this feat of political legerdemain accomplished, and Lincoln did so utilizing all means at his disposal.

I found it all fascinating. Spielberg and Kushner stage these events with evasive bravado, not shying away from some of the shadier aspects of the dealing – and double-dealing – Lincoln was forced to engage in as well as the stretching of the truth he felt was required to keep fellow Republicans in line. The dialogue is razor sharp, maintaining historical accuracy but effused with a rat-a-tat-tat zippiness found in classic romantic comedies like His Girl Friday or The Philadelphia Story.

All of this closed-room wheeling and dealing is coupled with raucous speeches made on the floor of the House of Representatives. It generates the same kind of suspense-fueled verbal pyrotechnics of past courtroom classics like Anatomy of a Murder or Judgment at Nuremberg, making the film more thrilling and filled with excitement than just about any suspense flick or action extravaganza released in 2012.

There are some overreaches, and I’m not certain all of the events depicting Lincoln’s relationship with his children – youngest Tad (Gulliver McGrath) and eldest Robert (Joseph Gordon-Levitt) – are as sharply focused as Spielberg or Kushner intend them to be. Additionally, while I liked the closing image the film fades out on, a case could be made that things should have ended much, much earlier with a brilliantly lit scene of a wearied but unbowed President heading to a certain theatre with tragic historical significance.

Not that I can work up any energy to complain about any of this. Lincoln is a triumph. Spielberg rises once again to heights few other filmmakers can match, his drama a rousing historical document everyone involved with its production should be proud of. I loved it. 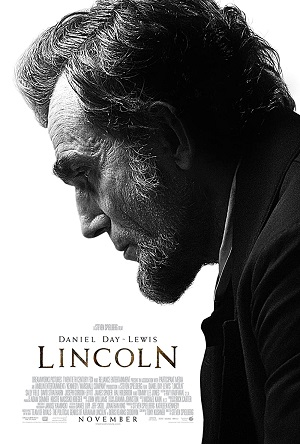