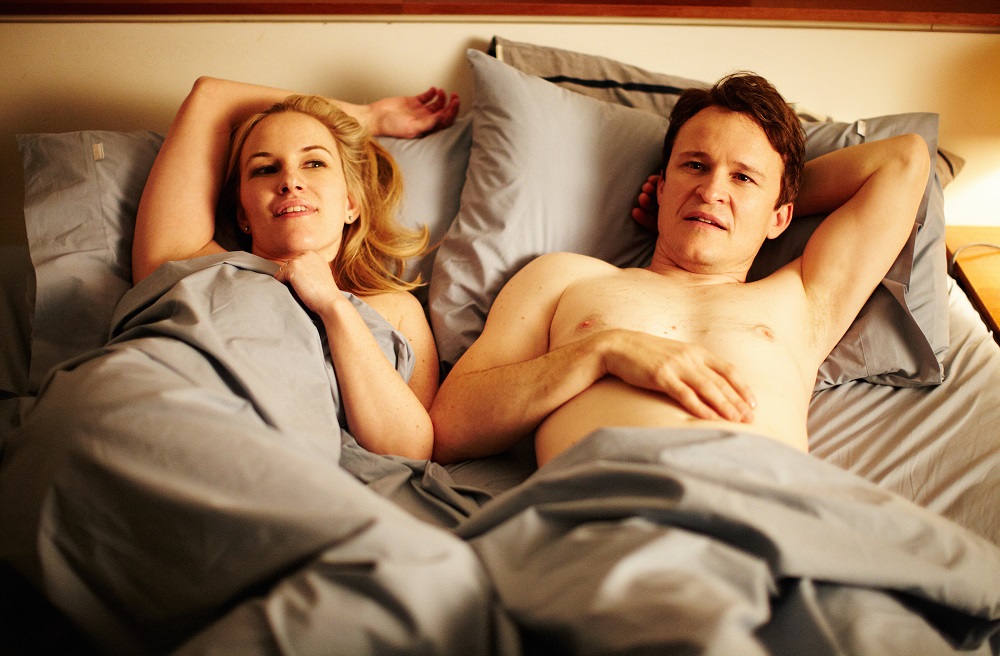 The Australian import The Little Death (not that I’m the first critic to point this out, the title is quite literally the French double-entendre for “orgasm”) is a suburban sex comedy that’s too tame to make much of an impact yet also just icky enough at times to border on repugnance. The film is the directorial debut for actor Josh Lawson (who’s also responsible for the screenplay) and more often than not it falls into sitcom platitudes and rote sentimentality to gets its points across. More than that, it’s prone to introducing a clever gag only to beat it into the ground until it’s no longer of value, oftentimes forgetting less is more especially as it pertains to eliciting laughter from the audience. 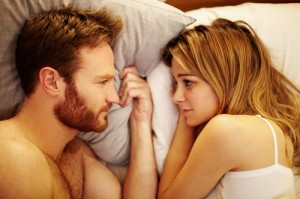 Revolving around four couples with a variety of sexual proclivities, phobias and dysfunctions that they’re either reveling in, combating, facing down or trying to overcome, the movie is your basic loosely connected series of comedic events that are constructed to engender some sort of emotional understanding from the viewer. Problem is, as creative as certain bits might be, as well cast as the picture is as a whole, nothing rises above being blandly sophomoric, the destinations where all the suburbanites are headed obvious right from the start.

Not that this means there are not some suitably terrific sequences scattered about. The role-play fantasies engaged in by Evie (Kate Mulvany) and Dane (Damon Herriman) are fairly amusing, the twist coming when the latter starts believing he’s so good assuming a fictional identity he should pursue work as a professional actor. Herriman, best known for his work on the television series “Justified” and to genre fans for the Aussie horror-comedy 100 Bloody Acres, is a hoot, never overplaying things allowing scenes to develop with a knowing self-effacing wink. Mulvany is splendidly paired with him, her growing exasperation when her beloved starts getting off on all the fanciful falsehoods quirkily sublime.

On the flipside, you have the saga of Phil (Alan Dukes) and Maureen (Lisa McCune). Stuck in an unhappy marriage, they haven’t had meaningful sex in ages. But when Maureen accidentally overdoes it on some sleeping pills allowing Phil to unexpectedly do as he will, he proceeds to take it as sign he should be helping her find ways to end up unconscious on a more regular basis. It’s an icky, unsettling set of circumstances that isn’t made any easier to stomach even if the pair is married, almost as if Lawson is making this form of implied nonconsensual sex okay as long as it follows a monogamous pattern of thinly constructed set of rules.

Which, of course, ends up making the rape fantasies Maeve (Bojana Novakovic) sometimes has disturbing on what I can only assume is an unintended level. Her relationship with commitment-phobic Paul (Lawson) is probably the most traditional one the film has to offer up. At the same time, the stuff that turns Maeve on has a dark side that is made all the more obvious and relatively unpleasant in large part thanks to the Phil/Maureen storyline, something that’s even more regrettable in large part because Novakovic and Lawson are so agreeably paired.

The fourth tale revolves around Rowena (Kate Box) and her husband Richard (Patrick Brammall), the former getting aroused every time she sees the latter cry, but it’s fairly inconsequential, and other than a moderately amusing bit at a funeral rarely goes anywhere interesting. There’s also a wraparound story involving registered sex offender Steve (Kim Gyngell), an engaging speck of silliness that’s initially funny but sadly wears out its welcome, Lawson returning to this well more often than necessary transforming a witty idea into something annoyingly frustrating. 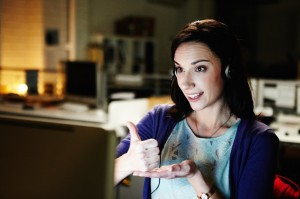 There is a highpoint, and it’s a wondrous one, a sign language interpreter for a Skype-like service, Monica (Erin James), finding herself in the middle of a conversation between a client (T.J. Power) and a phone sex worker (Genevieve Hegney). This whole sequence is amazing, a treasure-trove of great performances, pitch-perfect writing and sensational timing. It’s continually funny, first second to last. More than that, it hits all of the thematic concepts and ideas Lawson’s been working overtime to construct and does so in the span of a few short minutes, everything building to a stupendous punchline that had me madly giggling to the point of convulsions.

I wish that were enough. Unfortunately it isn’t, the repulsive nature of at least one of the storylines being followed hardly helping matters. As good as the cast might be, as great as individual moments might occasionally become, The Little Death is a poorly conceived comedic enterprise that fails to satisfy. Heck, a lesser critic might even go so far as to call it limp. 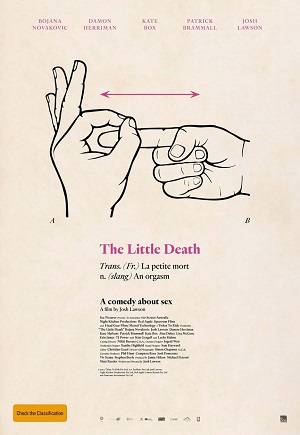