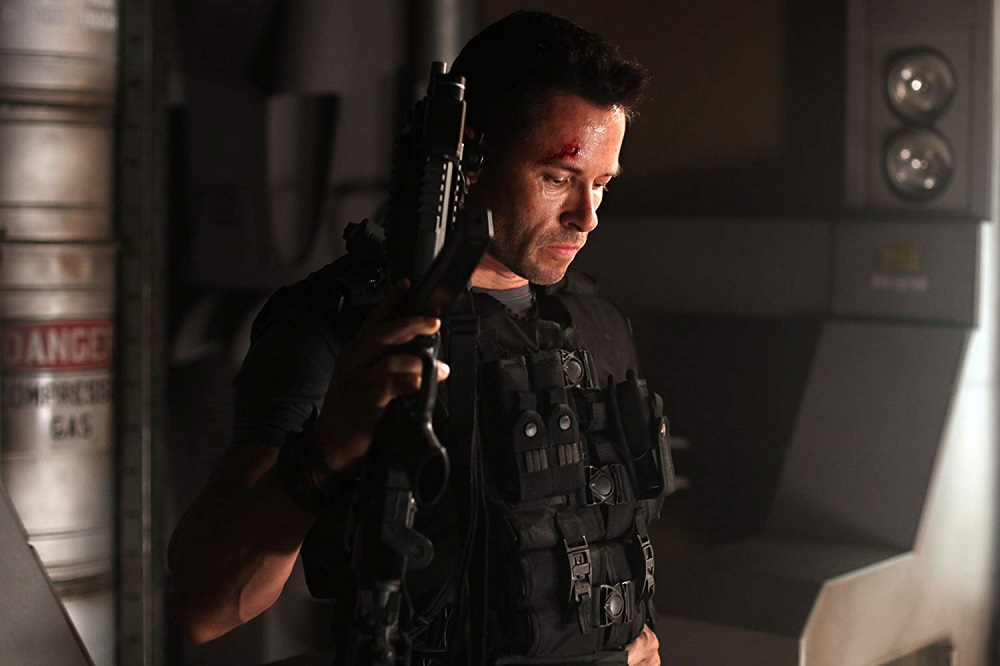 Before watching it, I kept joking to my fellow critics that the new B-grade science fiction action spectacular Lockout, sprung from the eternally prepubescent mind of French auteur Luc Besson (The Fifth Element, La Femme Nikita), should have been called “Escape from Space Prison.” Kidding aside, while the similarities to John Carpenter’s Escape from New York and Escape from L.A. are obvious, the real template for this thriller is 1988’s Die Hard, the movie following that John McTiernan classic’s structure to the letter once antihero C.I.A. Special Agent Snow (Guy Pierce) finds himself aboard interstellar prison MS-1with orders to rescue the President’s daughter Emilie Warnock (Maggie Grace).

Granted, mentioning Lockup in the same breath as Die Hard or Escape from New York (or even Escape from L.A.) borders on blasphemous, the movie having more in common with 1990s ‘classics’ like Fortress or Under Siege 2: Dark Territory than it does those films. But even that is disingenuous as those two look like Oscar-winning sensations compared to this idiotic, unintentionally hilarious and absolutely nonsensical monstrosity, and I’d compare it to stuff like Spacehunter: Adventures in the Forbidden Zone or Metalstorm: The Destruction of Jared-Syn if those ‘80s schlock epics weren’t so giddily entertaining in their outright awfulness.

Other than Pierce, who appears to be having a terrific time doing his best Snake Plissken meets John McClane impersonation, this misfire is an abomination. I get that co-writers and co-directors James Mather and Stephen St. Leger had some success directing short films and commercials, so it makes sense that Besson would be willing to give the duo a chance handling this relatively inexpensive sci-fi comic book adventure. But the duo’s handling of the feature is ghastly, and other than a few novel touches overall I was unimpressed with their debut.

This picture is a mess. What’s worse, given the simplistic and straightforward nature of the premise it really shouldn’t be. President’s daughter goes on a humanitarian mission to assess the merits of incarcerating prisoners in cryogenic sleep in Earth’s orbit. Through a series of unforeseen events all 500 prisoners wake up and take over the facility, holding said daughter hostage. Wrongly convicted for a murder he didn’t commit, an elite government agent is sent in alone to rescue her for a full pardon. Mayhem, violence, bloodshed and comedic one-liners ensue.

Problem is, Mather and St. Leger edit their picture with a Cuisinart, making the action visually unintelligible. Worse, their script isn’t so much written in shorthand as it is written in no-hand, everything feeling as if it were made up as shooting went along with little things like continuity and plot thrown aside like yesterday’s newspaper. There are a series of nonsensical video game-inspired visual effects sequences that are so subpar they’re headache inducing, while the action choreography once Agent Snow gets onboard MS-1 is just plain bad.

The movie isn’t exciting. It is funny for all the wrong reasons. The villains (a pair of psychotic Irish brothers played by Vincent Regan and Joseph Gilgun) aren’t scary and their eventual demise feels like an afterthought. Peter Stormare phones in his performance as an all-powerful government stooge who likes getting under Snow’s skin. The ending is tacked on and ill-conceived. As I already alluded the action sequences have no energy, no bite and zero ingenuity. The film is a disastrous, inexcusably cheap, borderline unwatchable misbegotten miscarriage of cinematic justice, watching it a continuous slap to the face that’s every bit as unbearable as that sounds.

Only Pierce makes it through unscathed, and admittedly I’d love to see him in a similar sort of role at some point in the future. He honestly does seem to be having a grand time playing this character, giving far more of himself for the cause than the picture deserves. It isn’t enough, the film never doing anything with his performance that might mitigate just how awful the reminder of this action opus turns out to be. Unlike so many of the mid-1980s to early1990s sci-fi B-movies it’s emulating, Lockout isn’t even so bad it’s good, the final product an out of this world debacle that will undoubtedly go down as one of 2012’s worst motion pictures. 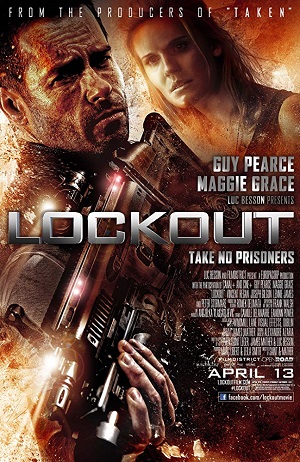