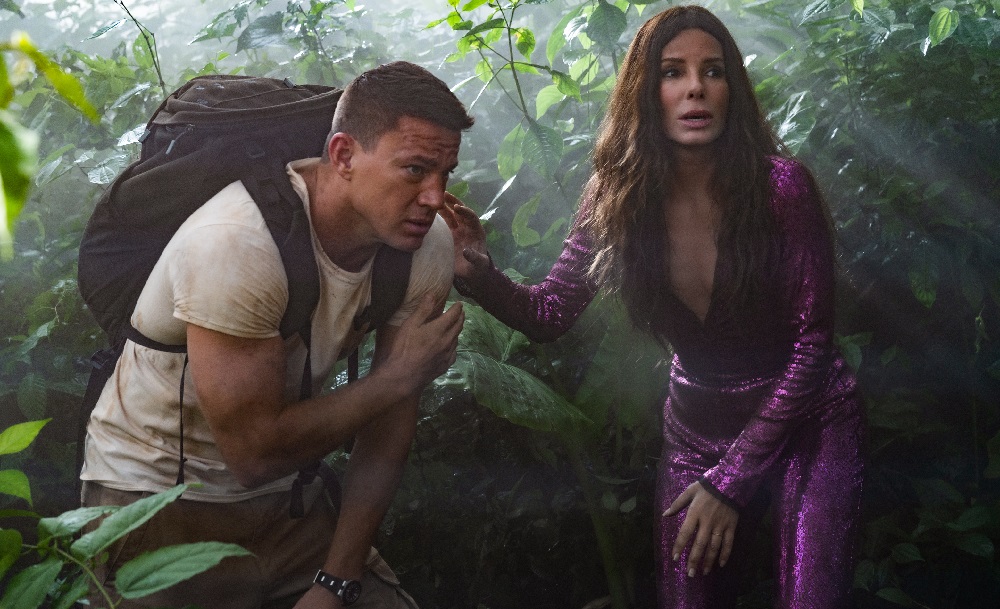 When successful romance novelist Loretta Sage (Sandra Bullock) set out on the press tour for her latest book, she never suspected she’d end up kidnapped by kooky billionaire Abigail Fairfax (Daniel Radcliffe). Upset that his brother was given the reins to his family’s broadcasting and publishing empire and not him, Abigail has become obsessed with lost civilizations and ancient treasures. He’s convinced Loretta has uncovered clues to a fabled ruby crown hidden in a lost city, and he’s determined she’s going to use this knowledge to help him find it.

Enter Alan (Channing Tatum). He’s the sexy cover model for all of Loretta’s books. But he’s always wanted to be seen by her as more than that. With Loretta’s publicist and best friend Beth’s (Da’Vine Joy Randolph), Alan believes he is capable of doing whatever it takes to save the author from Abigail’s clutches, not that he has any of the requisite fighting or survival skills this sort of rescue mission typically requires.

The Lost City is unquestionably a riff on the 1984 Michael Douglas/Kathleen Turner/Danny DeVito adventure-comedy classic Romancing the Stone. Jungle survival? Hidden treasures? Romantic intrigue? A power-mad villain whose greed has colored their judgment? It’s all here, directors Aaron and Adam Nee (Band of Robbers) and their team of screenwriters hitting all the expected beats with enthusiastic aplomb.

As great as all that sounds, the only reason I’m willing to give this film something of a halfhearted recommendation is based solely on the undeniably magnetic chemistry generated by Bullock and Tatum. They bring fire and flair to the proceedings, bouncing off one another with an effortlessly intoxicating ebullience that’s nothing short of wonderful. The two actors were born to play characters like Loretta and Alan, Bullock and Tatum a romantic comedy dream team who almost manage to transform a lukewarm frozen dinner into a five-course gourmet meal.

Only almost. For all the magic the pair manage to conjure, and as delightfully underplayed a robustly masculine cameo from pitch-perfect Brad Pitt – his presence is far from a spoiler as he’s all over the trailers and the promotional materials – is, there’s a lot about this one that left me cold. I was never able to let myself go and enjoy all this loopy jungle madness, the whole thing coming across as too mechanically forgettable for my tastes.

The reason Romancing the Stone has stood up so well over the decades is that director Robert Zemeckis and his talented cast took their crazy treasure-hunting insanity seriously. The romance between the leads happened naturally. Their fight for survival, while corny, had naturalistic charm. The gags were rooted in the situations romance novelist Joan Wilder and adventurer Jack Colton found themselves in, the majority of them character-driven and not tossed in willy-nilly just for fun.

One reason that film’s 1985 sequel The Jewel of the Nile was so disappointing was that it didn’t follow in its predecessor’s footsteps as closely as it should have. The gags were forced. The humor was stilted. It frequently felt like the primary cast was in on the joke, almost as if they were winking back at the audience how silly and absurd everything was.

The Lost City did not learn this lesson. There are far too many moments where it is as if the Nee brothers are making an Airplane! or Hot Shots! gag-a-second comedy and not one that takes itself and its audience a bit more seriously. It revels in sitcom patter, seemingly not caring if audiences are taken out of the picture every time the filmmaker call explicit attention to how absurdly silly everything is. This world doesn’t get the opportunity to exist. It’s always fake, and as such, the danger Loretta and Alan find themselves in never feels genuine.

Bullock and Tatum do rise above the fray, however, much in the same way that Douglas and Turner did in The Jewel of the Nile. But the latter pair had the luxury of brilliantly establishing their characters one picture prior, the former two not getting that same sort of opportunity. This makes what Bullock and Tatum accomplish all the more spectacular, and the ease in which they do so is extraordinary.

It does help that the Nee brothers do stage a couple of impressive set pieces, most notably one roughly halfway through where Loretta and Alan are forced to race through the jungle dodging a flock of Abigail’s hired thugs riding motorcycles. There is also a lovely moment between the pair in a small village where they find unexpected comfort dancing in one another’s arms while listening to a native song with lyrics far more apropos to the predicament they find themselves in than they initially realize.

But if I’m being honest, Bullock, Tatum, and the magic they create together is the sole positive that matters. They make The Lost City what it is, and audiences who enjoy themselves are going to do so entirely because of them. The two superstars are the real treasure this motion picture is concealing in its celluloid jungle, and thankfully both are hiding in plain sight, making their magnificence extremely easy to find. 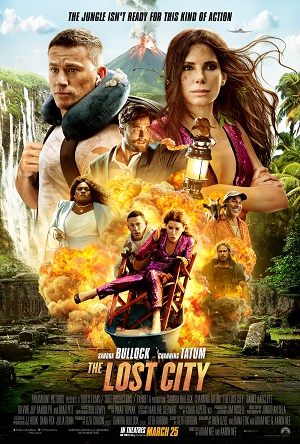