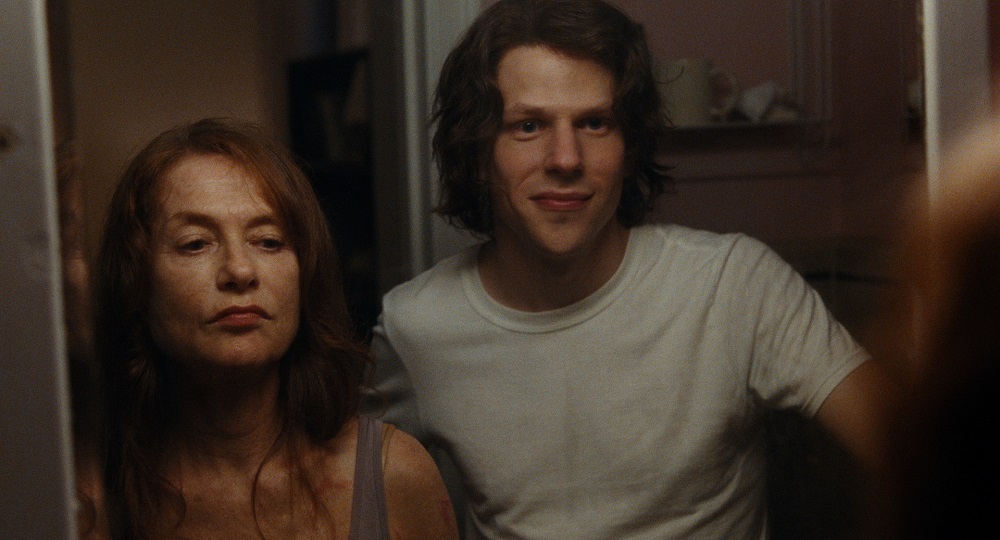 Heartfelt Bombs an Explosion of Truth

Isabelle Reed (Isabelle Huppert), the celebrated war photographer, has been dead for two years, killed in a late night car accident while she was driving home. In that time, her husband Gene (Gabriel Byrne) and sons Jonah (Jesse Eisenberg) and Conrad (Devin Druid) haven’t done the best job of moving on, each carrying the weight of the loss in their own unique way. With a major art exhibit about to open featuring her work, as well as a giant New York Times profile being written by family friend Richard (David Strathairn), the trio are forced to try and put the loss into a kind of perspective that might be beyond them. Gene and Jonah are especially worried how the emotionally fragile Conrad, now a high school senior, is going to handle all of this, truths regarding Isabelle’s death about to come to light that they’ve been doing their best to keep from him ever since this tragedy took place. 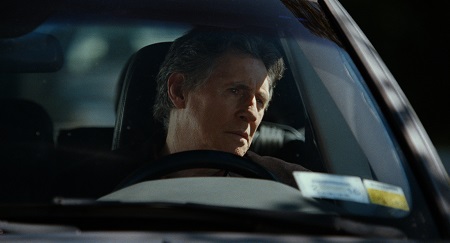 In the running for the Palme d’Or at the 2015 Cannes Film Festival, celebrated director Joachim Trier’s (Oslo, August 31st) first English language feature Louder Than Bombs is in many ways exactly the drama you’d expect it to be. Deeply personal, moving at its own pace, unafraid to filter in nonlinear flashbacks and memories that might be truth, could be fiction and are more often than not a surrealistic combination of the two, this is an emotional slugfest that oftentimes dares the viewer to keep on watching. These characters are not always likeable and they seldom do what we would like them to do. At the same time, they act just as many would if stuck in the same sorts of situations, each attempting to navigate grief in ways that are distinctly personal in and of themselves.

The ball gets rolling once Gene learns Richard intends his feature is to include the full truth as to what really caused Isabelle’s car accident, and this, coupled with a request by his late wife’s art gallery to have access to her final photographs, forces him to turn to Jonah for assistance. The young man, recently named to a professor position and a new father himself, wife Amy (Megan Ketch) giving birth to the pair’s first child, is reticent to get too involved. But as he is the one who knows his mother’s work best he’s the only one who can truly decide which photographs are suitable for public presentation. On top of that, he should be there when Conrad learns the truth, the kid something of an emotional recluse who’s always been a little bit off since that dreadful night two years prior.

Trier, co-writing the script with frequent collaborator Eskil Vogt, plays things fairly close to the vest, allowing limited bits of dialogue and a plethora of dreamy surrealistic images to make up the majority of the narrative pieces, trusting the audience will be able to put most of them together without any overt aid on his part. It’s a neat trick most of the time, allowing for haunting bits of unnerving honesty that startle and shock. A self-portrait of the photographer in a Syrian hotel room looking into her own camera as if Death was about to join her underneath the covers. A father silently stalking his youngest son, primarily out of parental worry, but also due to adult curiosity as to what the youngster is doing with his time, and if it might be something he could have done once upon a time in his own youth way back when. A flirtatious reunion with a teenage flame in a hospital, pain, curiosity, friendship and passion intermingling in ways that are as incommodious as they are magnetic.

These pieces sometimes work better than the film as a whole does, and not all of it fits together as comfortably as I can only imagine Trier intends it all to. There are times it all just gets too ephemeral, too obtuse, working in visual shorthand that’s reminiscent of Terrence Malick, Jean-Luc Godard or Alain Resnais only without the clarity of purpose those three generate in a number of their best, most essential cinematic endeavors. Jonah, in particular, is left too far out on a limb a lot of the time, and while Eisenberg does what he can there’s just not a lot he can do most of the time to make his character resonate in ways that go beyond self-centered or pathetic. As far as Jonah’s internal conflicts were concerned, I just didn’t care about them as much as I did those that pertained to Gene or Conrad, and as such I just didn’t care to spend any more time than was necessary trying to make heads or tails of him. 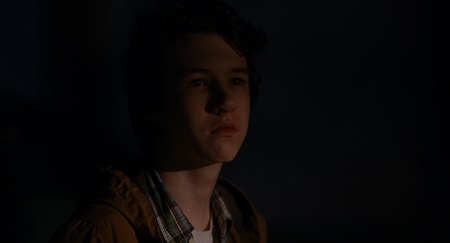 In fact, it is Conrad’s story, as sad as it can often be, that moved me the most. This kid, an outcast trying to find his way, a loner longing to fit in, a mother’s son who must now turn to a father he barely knows for guidance and understanding, there’s something about him that held me captivated and speechless. Druid underplays him beautifully, allowing little sparks of emotion to filter in that are pleasingly genuine. There’s this great little moment where he leaves a package on the doorstep of a classmate he’s enchanted with, an envelope filled with creative flights of fancy he hopes she’ll be impressed with. As Conrad runs away from the girl’s doorstep, wanting to keep his identity anonymous, Druid flashes this terrific little smile that instantly breaks through all of the grief and sadness that’s been hanging around the kid like a shroud, producing a beguiling bit of levity that’s simply sublime.

I have this sneaking feeling I’m going to want to watch Louder Than Bombs again, that on second viewing many of the parts that aren’t sitting particularly well with me right now might become ones I have a whole new appreciation for when the film is given another look. All the same, Trier’s latest amazes far more often than it disappoints, the emotional highs it generates ones that caused the hairs on my arms to stand straight up in awe every time I was lucky enough to experience them. When all is concluded, truth is the explosive device that ends up having the most brutally cathartic potency, letting it out into the world leading to an explosion of forgiveness and understanding the collateral damage of which is a divine positive worthy of celebration. 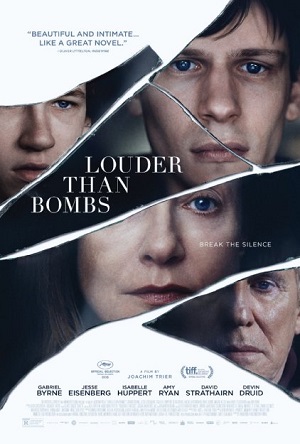