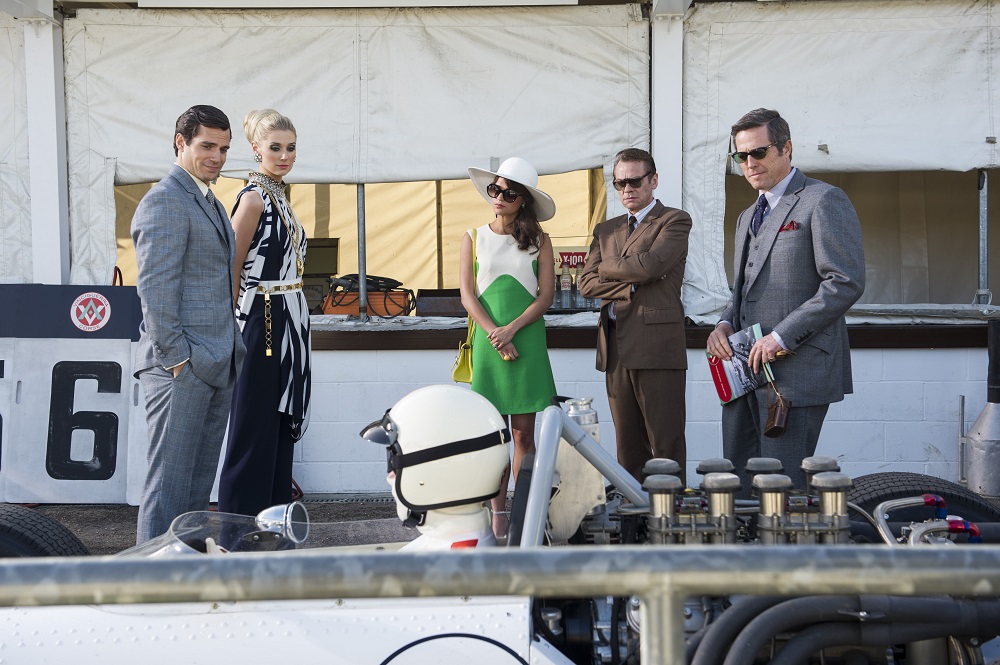 “Oh, and you have a new codename. Rather a good one: UNCLE.” 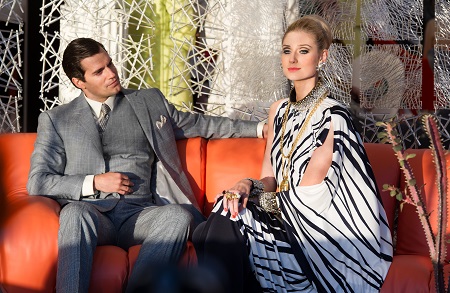 “Napoleon Solo (Henry Cavil) is a spy working for the CIA. A former thief, he’s out on the frontlines of the Cold War between the United States and Russia fighting the good fight in lieu of spending 15 years in prison. His latest case involves getting beautiful East German mechanic Gaby Teller (Alicia Vikander) from behind the Iron Curtain, getting her over into West Germany even as KGB secret agent Illya Kuryakin (Armie Hammer) relentlessly pursues.

However, things are more complex and dangerous than either man knows. Their immediate superiors were hoping to get Gaby’s help in finding her estranged nuclear scientist father, Dr. Udo Teller (Christian Berkel), a man working on the latest in atomic weaponry and whom they believe has been kidnapped. Their suspects are Victoria (Elizabeth Debicki) and Alexander Vinciguerra (Luca Calvani), a pair of Italian industrialists and Nazi sympathizers intent on taking the leap into international arms dealing that could change the shape of global supremacy forever.

Naturally, this means Solo and Illya, along with Gaby, are off to Rome in order to find the latter’s father, stop the Vinciguerras and potentially defuse a nuclear bomb. It’s the type of thing the two secret agents did all of the time during the run of the popular 1964 to 1968 classic spy-helping-spy televisions series ‘The Man from U.N.C.L.E.,’ director Guy Ritchie and his Sherlock Holmes co-screenwriter Lionel Wigram playing this up with obvious glee. There is a joyous, devil-may-care enthusiasm to this big screen adaptation, the filmmaker reveling in the humor, the charm and the characters instead of focusing on the requisite whiz-bang and over-the-top action theatrics this sort of production typically revels in. In short, it’s excellent, and for my money the best television-to-movie adaptation since 1993’s The Fugitive.

There was a period of time, apparently fairly brief (but in Hollywood speak we’ll likely never know), when Steven Soderbergh flirted with making this film. Whether he did or he didn’t, it cannot help but feel as if his influence somehow, someway, made some sort of imprint on the director, because in almost all respects that matter this feels like the most anti-Ritchie Ritchie film he’s ever been a part of. There is a retro elegance, a late 1960s, early 1970s free-spirited, anything goes vibe that radiates throughout in ways that recall Haywire and Magic Mike more than they do Snatch or RocknRolla.

I love this about the film. Ritchie and his crew spend more time fleshing out the relationship between Solo and Illya than they do anything else. The byplay between the duo, how they relate to one another as well as with Gaby, that’s the core around which all else gloriously revolves. So much so, the filmmaker fearlessly allows entire action set pieces, set pieces he would have elongated to the point of annoyance in prior motion pictures  (Sherlock Holmes: A Game of Shadows being a prime example), to play off in the corner of the frame as if they were nothing more than cutely endearing afterthoughts and nothing else. Instead, he spends time watching Solo take a break to sip some wine, eat a sandwich and listen to some great music while a fiery boat chase takes place a handful of meters away from him; observing Illya as he makes sure he’s got all his ducks in a row even as he’s being chased by man-eating guard dogs.

It’s this element that makes this adaption so memorable. More so because both actors, Cavil and Hammer, are just so gosh darn terrific in their roles (characters originally made famous by Robert Vaughn and David McCallum), the former in particular. The Man of Steel superhero is superb, funny and charismatic, sexy and self-effacing, bringing just the right touch to his international man of larceny that he dominates nearly every scene he is a part of.

Almost all of them. Debicki proves to be, if not this summer’s best villain (Mad Max: Fury Road despot Immortan Joe probably still holds that honor), at least part of the conversation. She’s a royal treat, sexily sauntering through the proceedings with a confident swagger that’s breathtaking. So good in The Great Gatsby, she’s even better here, capturing the attention that go beyond the thinly rudimentary machinations of a Bond baddie circa Thunderball or Diamonds are Forever. Debicki is the real deal, make no mistake, watching her chew scenery one of the more delectable pleasures I’ve had the good fortune to much on so far this year.

I wish I could say the same for Vikander. The Ex Machina and A Royal Affair actress is still a star in the making, but much like this year’s somewhat disastrous Seventh Son this movie doesn’t make near as much of her as it possibly could have. She’s not an afterthought, too much of the narrative revolves around her and the decisions Gaby is forced to make for that to be true, it’s more that she’s too much of a one-dimensional cog utilized to get Solo and Illya to make their next move than she is anything else. Vikander has some terrific scenes, and her chemistry with Hammer is undeniable; but while her way with a pithy comeback is gloriously winning, as heroines go the script can’t help but let her down, at least a little, and that’s annoying make no mistake. 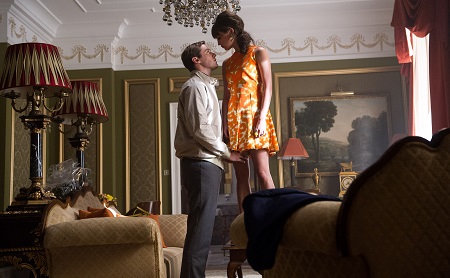 All the same, The Man from U.N.C.L.E. won me over. Ingeniously scored by Daniel Pemberton (The Counselor), elegantly shot by John Mathieson (Gladiator), featuring  suitably stylish production design by Oliver Scholl (Jumper) and edited to within an inch of its sophisticated life by James Herbert (Edge of Tomorrow), there’s so much to adore it’s almost hard to speak of it all in one brief review. For Ritchie, this is a career highpoint ranking up with his rollicking British comedy-crime noirs that initially put him on the map, and with this foray into Cold War spy-craft I can only hope he and his talented troupe get the opportunity to return to it again at some point in the very near future.”

It’s quite possible The Man from U.N.C.L.E. is the single most underrated – and underappreciated – major studio tentpole that was released to theaters this past summer. It’s fantastic stuff, holding up beautifully on repeat viewing, just getting better and better each time I watch it. Guy Ritchie seems reinvigorated by this TV-to-film adaptation, and here’s hoping those who skipped it theatrically take the time to give it a look now that it is available on Blu-ray.

Spy Vision: Recreating 60’s Cool(8:34) – The filmmakers take a look at what inspired them as they set out on the course to make the movie, the featurette’s primary focus on the production design, costumes and locations as seen in the finished product.

A Higher Class of Hero (7:13) – Guy Ritchie and company on how they set out to design many of the film’s action sequences as well as their collective desire to give things an original look and feel.

Métisse Motorcycles: Proper—and Very British (4:49) – Fun little featurette with Gerry Lisi, owner of Métisse, the manufacturer of the retro motorcycles used so effectively inside the movie.

The Guys from U.N.C.L.E. (4:57) – Brief little profile piece on Armie Hammer and Henry Cavill along with what made them the ideal picks to take up the challenge of portraying Illya Kuryakin and Napoleon Solo.

A Man of Extraordinary Talents (3:16) – Another brief featurette, this one focusing on director Guy Ritchie.

U.N.C.L.E.: On-Set Spy (5:16) – Four additional mini-featurettes that are way more fun to watch than they arguably have any right to be.

I really am in love with The Man from U.N.C.L.E. My appreciation and affinity for it just rises with each viewing. It’s terrific, and even if the film didn’t meet with much in the way of box office or acclaim during its theatrical run that doesn’t mean Warner Bros. has skimped in any way on the Blu-ray presentation, this package receiving high marks all across the board. 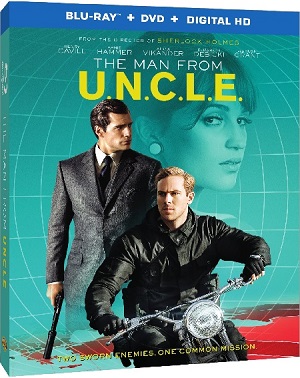