The glorious, phantasmagoric insanity of writer/director Panos Cosmatos and co-writer Aaron Stewart-Ahn’s Mandy cannot be underappreciated. This is controlled schizoid cinematic mania on a grand scale, all of it living inside a junky, suitably sparse 1980s-style low budget exploitation thriller where shock and awe coexist with moody three-dimensional character development in something close to Heavy Metal harmony. This is an aggressive and violent move yet it is also one that unabashedly wears its heart on its Black Sabbath t-shirt-wearing sleeve, all of it propelled forward by an unhinged, brazenly uninhibited performance from star Nicolas Cage that’s every bit as goofily manic as longtime fans of the actor ever could have hoped for.

As indescribable as much of this proves to be, the film is still an almost perfect follow-up to Cosmatos’ equally mind-bending debut, the surrealistic 2010 science fiction conundrum Beyond the Black Rainbow. While more straightforward and plot-driven (to a certain degree) than that one was, Mandy still shares many DNA similarities with the director’s psychologically unbalancing debut. The neon color schemes, the almost Salvador Dali-esque imagery, the way one scene can slam into another creating messy, visually resplendent panoramas of beauty and debauchery, often both at the exact same time; it’s all part of what makes this thriller click as well as it does.

But where Beyond the Black Rainbow was a dreamscape of uncertain mystery that seemed born entirely out of the ether with few human elements grounding it in tactile reality, this story is fueled by white-hot character interactions overflowing in emotional complexities that are distinctly relatable. It’s an intriguing evolution for Cosmatos, the director sticking with what can be construed as a signature filmmaking style yet now determined to ground it in an ethereal, metaphorically psychosomatic atmosphere reminiscent of the recent, even more esoteric than normal offerings of vaunted director Terrence Malick (Song to Song, Knight of Cups, To the Wonder).

As mixtures go this is a daring one, and I can’t say Mandy continually strikes a consistent balance between its varying elements. The first third is purposefully measured, Cosmatos taking his time building up these characters and documenting this grizzled, terrifically sparse 1983 world in which they reside. Some of this stuff can be purposefully trying, almost as of the film is daring the viewer to stick with it no matter what is currently happening. Then, as if he knows spectators are perched precariously upon their last viable nerve ending, Cosmatos allows things to explode in a multitude of mind-blowing, sometimes repugnant, continually spellbinding ways, light and dark battling for bloody supremacy in a no-holds-barred bout where the eventual victors are the members of the audience who watch this story play itself out all the way to conclusion.

Then there is Cage. This is a next-level work by the veteran actor that recalls his epically hyperbolic performances in classics like Vampire’s Kiss, Wild at Heart, Face/Off and Adaptation. But he also mines similar emotional depths reminiscent of his Oscar-winning turn in Leaving Las Vegas, grounding all the gruesome balletic mayhem in a believably empathetic milieu that’s heartbreaking in its tragic melodramatic excess. While Cage’s work this past decade or so has noticeably left a lot to be desired, much like Werner Herzog did with Bad Lieutenant: Port of Call New Orleans and Brian Tyler did with Mom and Dad Cosmatos challenges the actor to let himself go wild much like he did the ‘80s and ‘90s, and as such he delivers a performance that’s an undeniable triumph.

The plot is a relatively simplistic throwback to the likes of Straw Dogs or The Last House on the Left only with a backwoods attitude oozing in Iron Maiden meets Metallica aggression. Logger Red Miller (Cage) lives a happy life with his artist wife Mandy (Andrea Riseborough), the pair’s seemingly idyllic existence shattered with the arrival of a demonic cult calling themselves the Black Skulls who are led by the telekinetic Jeremiah Sand (Linus Roach). After an evening of supernaturally devilish violence, Miller refashions himself into a revenge-seeking road warrior, going after Sand and his followers with an unbalanced ferociousness that’s inhuman. Chainsaw fights and other various forms of homicidal psychosis ensue.

Magnificently and expressionistically shot by Benjamin Loeb (King Cobra) and memorably scored within an inch of its harebrained life by the late, great Jóhann Jóhannsson (Arrival), much like his main character Cosmatos appears to be going for broke behind the camera every step of the way. He directs with a lunatic gusto that suits the material, and while not every second of the film works it’s still impossible to imagine any single scene or sequence being cut out and the finished product working nearly as well as it ultimately does. Throw in Cage’s borderline brilliance, and Mandy is a bonkers piece of sensationalistic bravado I couldn’t help but adore, and here’s my hope viewers lucky and daring enough to give it a look end up feeling the same. 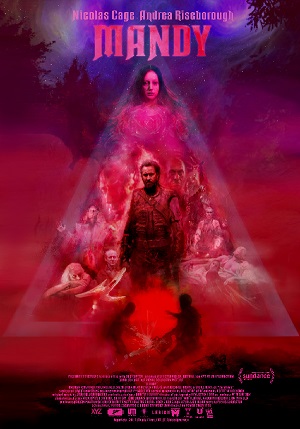