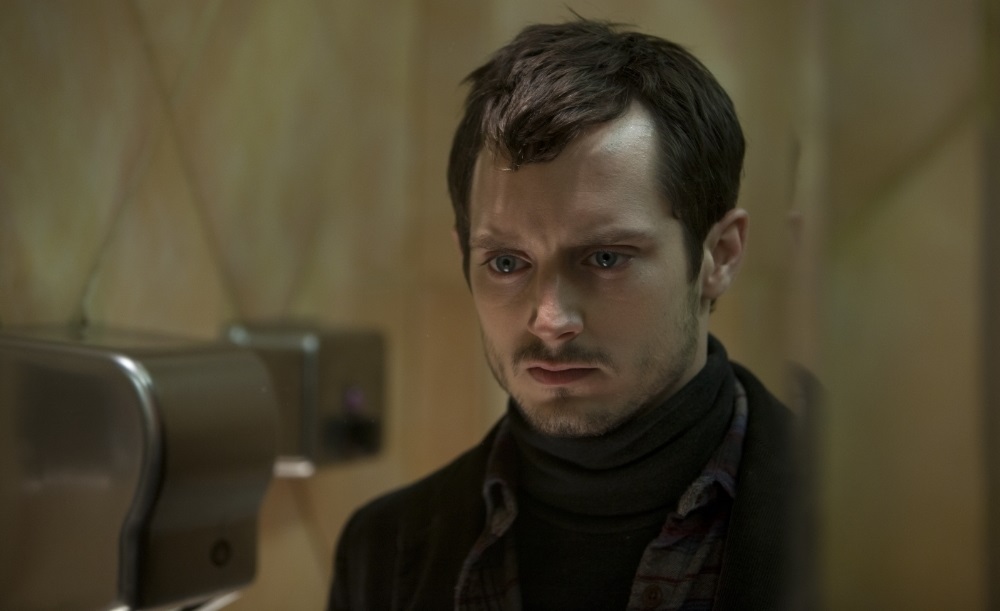 Frank (Elijah Wood) has a a problem. Not with his job, although being the sole proprietor of a store specializing in the reconstruction and repair of antique mannequins is a bit on the creepy side. Still, he’s good at it, likes the work and feels like he’s doing his part to keep a relatively lost art form alive. Also, while he’s withdrawn, tends to keep to himself, isn’t necessarily a ‘people person’ per se, it’s not like he can’t hold a conversation, so he’s more or less fine there as well.

No, Frank’s problem is that he’s a bit of a homicidal maniac, the young man having an uncontrollable urge to stalk, track down, murder and subsequently scalp sexy young brunette women who remind him of his dearly departed mother (America Olivo). Bringing pieces of them home reminds him of her, using their hair to decorate his most prized mannequins treating them as if they were alive and part of the family. But when he meets talented blonde artist Anna (Nora Arnezeder) there’s a chance Frank can change his stripes, seeking love with her maybe just the outlet he needs in order to keep the knife in the scabbard and stop all the unnecessary bloodletting. 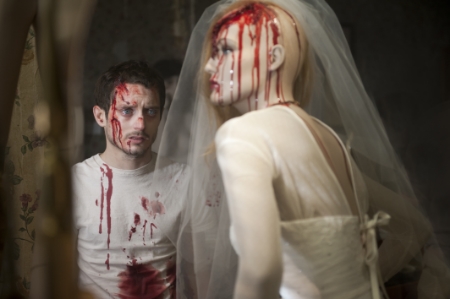 Maniac, directed by Franck Khalfoun (P2), scripted by Piranha remake teammates Alexandre Aja and Grégory Levasseur, is a reimagining of the 1980 cult splatter favorite of the same name directed by William Lustig and written by Joe Spinell and C.A. Rosenberg. It takes the basic idea from the previous film and then runs energetically into an entirely new direction, upping the slasher game by crafting a first-person you-are-there narrative structure that in large parts makes this effort the Enter the Void of B-grade exploitation terror.

I mean that as compliment. A good 95-percent of this is seen entirely through Frank’s eyes, from his perspective, Khalfoun and company making the viewer a gore-covered participant for almost every single ounce of the blood-splattered chaos to come. It’s chilling stuff, unsettling and uncompromising every step of the way, and for someone like me who feels like they’ve seen just about all the genre has to offer this is one disgustingly disturbing wakeup call virtually impossible for genre fanatics to resist.

Granted, even though the movie is a big departure from the original, a film with impressive gore effects, sure, but in my opinion doesn’t offer a heck of lot more than that, it isn’t like this new Maniac rewrites the rule book as far as narrative, suspense, plot twists or character are concerned. Frank is a messed up shell of a human being right from the start, so it isn’t like his descent into an even deeper pit of madness and mayhem is anything close to a surprise. Additionally, the only question in regards to his relationship with Anna is how fast she’ll uncover his secret and whether or not she’ll be able to keep her scalp attached to her head, and considering the filmmakers involved (it’s not like High Tension or their The Hills Have Eyes remake ended all that happily) the answers to both questions are more or less forgone the moment she walks into his mannequin shop.

And yet, the movie is exhilarating in most respects, heading to dizzying depths of tension and horror that kept me glued to my seat. Wood plays Frank with an innervating directness that burrowed under my skin, and from the very first moment he mumbles about a woman’s physical beauty I pretty much knew he was going cut and gauge his way across the screen in ways that would make my brow sweat and teeth chatter. His childlike façade hides devastating evil, the Lord of the Rings trilogy fan favorite flipping the switch and dismantling his own relatively wholesome image in a way that’s savagely uninhibited.

From a visual standpoint, cinematographer Maxime Alexandre (The Crazies) does sensational work, the mostly handheld first-person esthetic driving events home as they are happening in a way that’s difficult to give full justice to here. His camera is unsentimental and unwavering, looking at each step of Frank’s journey with documentary-like exactitude cutting the man zero slack while at the same time allowing his actions and failing mental faculties to speak for themselves. It’s a daring tact on the Khalfoun’s part and he’s got the perfect operator in Alexandre to help him realize his exacting vision, the pair working in intimate tandem to the point one almost wonders who it was exactly was captaining this particular ship.

There are/were risks to all of this, or course, and as I’ve already stated spending time inside Frank’s shoes isn’t exactly a riot and, quite obviously, will not be every viewer’s cup of tea. The film’s unrelenting nature and fearlessness in regards to showcasing each and every kill is understandably unsettling, and even though the filmmakers go out of their way to get inside their protagonist’s head spending time there isn’t altogether pleasant. It’s rough stuff, covered in blood and dripping with intestinal fluids, and even for someone like me who’s used to this sort of thing there were plenty of moments I wondered what the heck I was doing watching this.

It’s all borderline irredeemable, going so far into the exploitation genre deep end swimming there for any extended period of time becomes close to untenable. But the level of imagination, the way Khalfoun, Aja and Levasseur flip things on their head while at the same time paying just homage to both American and Italian giallos gone by, the electronica score by Rob (Populaire) is a total Argento meets Bava meets Fulci trip and a half (and I mean that as a humongous compliment), the team crafting a uniquely spellbinding slasher I couldn’t take my eyes off of. Maniac isn’t for the faint of heart or the weak of stomach, that’s true, but I borderline loved it, and as diseased as it all might be that doesn’t change the fact I can’t wait to experience every single one of its terrors again. 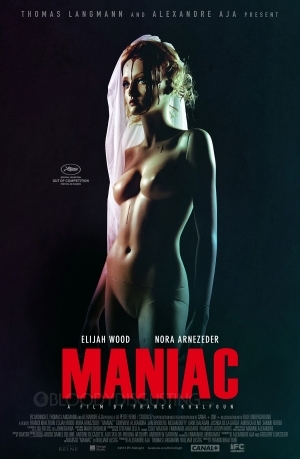