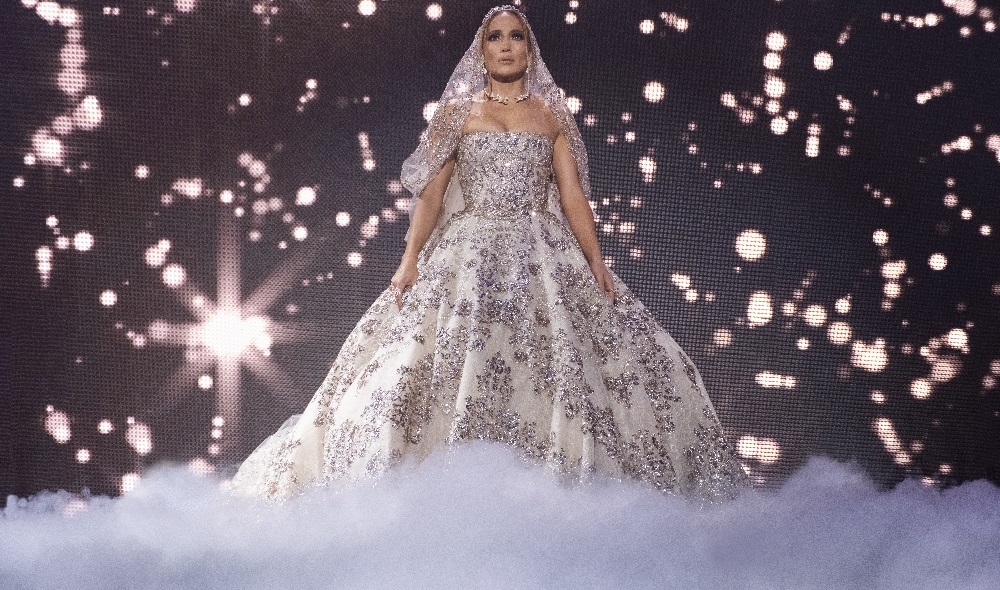 Lopez and Wilson Make Beautiful Romcom Music in Marry Me

I have a confession to make: Even though I’ve been a fan of Jennifer Lopez since Selena and Out of Sight and felt – until Hustlers, of course – that she’s never gotten a fair shake as an actress, I didn’t like any of her romantic comedies from the early 2000s. Maid in Manhattan? The Wedding Planner? Monster-in-Law? She’s charming enough, yes, but the films still left me cold, each feeling like second-rate genre efforts that tried to get by on Lopez’s star power and precious little else.

I am somewhat shocked by how much I adored Marry Me. Directed by Kat Coiro (A Case of You) and reuniting Lopez with Owen Wilson for the first time since 1997’s goofily silly creature-feature Anaconda, the film features a suitably outlandish premise that’s basically the rock-star version of Notting Hill. This is a smart, character-driven romantic comedy that pulls at the heartstrings with confident flair. I was captivated from start to finish, and if I could have watched the whole thing again the moment after it had concluded, I would have.

Veteran superstar Kat Valdez (Lopez) is set to marry fellow international sensation Bastian (Maluma) at the end of her Madison Square concert live and in front of an estimated 20 million viewers. Middle school math teacher Charlie Gilbert (Wilson) is only at the event to appease his best friend Parker Debbs (Sarah Silverman) and to surprise his 12-year-old daughter Lou (Chloe Coleman), one of the singer’s biggest fans.

The pair never should have met. But when Kat learns of Bastian’s infidelity while standing on stage in her wedding dress, she happens to spy Charlie holding a sign saying, “Marry Me.” Doesn’t matter that it was Parker’s sign, not his. Doesn’t matter that she has no idea who this guy is or where he comes from. Pulling Charlie up on stage, she convinces him to wed her right then and there. Being the compassionate guy that he is and believing he’ll have nothing more than a crazy story to tell his grandchildren, he goes through with the ceremony, not fully grasping the ramifications.

Again, this is an inherently ridiculous premise. But it’s honestly no more so than ones concocted for the Fred Astaire/Ginger Rogers musicals of the 1930s. Much like those classics, what makes this movie work is the stratospheric chemistry of the two stars, Coiro’s nimble direction, and the unexpected intelligence of Harper Dill, John Rogers, and Tami Sagher’s screenplay. It all works, sometimes beautifully, and even at just under two hours, I can’t think of a single second I could have done without.

The screenwriters have done a terrific job of transforming Bobby Crosby’s 2008 graphic novel to suit Lopez’s and Wilson’s talents. There is a maturity here that feels strangely fresh, the lived experiences of both Kat and Charlie having equal value and thus achieving similar resonance.

These are people who have been damaged by love, but not irreparably so. While one has remained an optimist in regard to romantic possibilities, the other isn’t so much of a pessimist that they’ve sealed their heart permanently. Even if they don’t know it, Kat and Charlie are two sides of the same coin. Their differences lead to unforeseen commonalities. Complications allow for imaginative solutions. Each step they take to separate only leads them to three others that inch them closer together, and even if they don’t see it for themselves, for viewers it’s immediately apparent they’re destined to fall into one another’s arms sooner rather than later.

That’s not a spoiler. As divine as all of this might be, that does not make the narrative bones any less conventional. One and one still add up to two. There are no surprises as to where things will end up, and it’s obvious early on what it’s going to take to get Kat and Charlie on the same wavelength.

Not that I care. Lopez is luminous. Wilson hasn’t been this effortlessly charming in ages. They play off one another marvelously, achieving a connection I couldn’t get enough of. The supporting cast also does a nice job, even if I do wish some of them could have had something a bit more substantive to do. Still, Silverman, Maluma, John Bradley, and Michelle Buteauall all make memorable impressions, while between this, My Spy, and Gunpowder Milkshake the pint-sized Coleman is quickly proving there isn’t anyone she can’t steal a scene from in a matter of microseconds.

Never once watching Marry Me was there an instance where I rolled my eyes in disbelief or felt like this feature-length sitcom was going in the wrong direction. Featuring several outstanding songs written for the film and a delightful climax at a mathematics competition, this is the best romantic comedy Lopez has ever made, and I loved it. 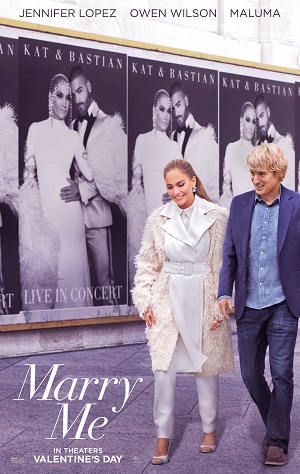