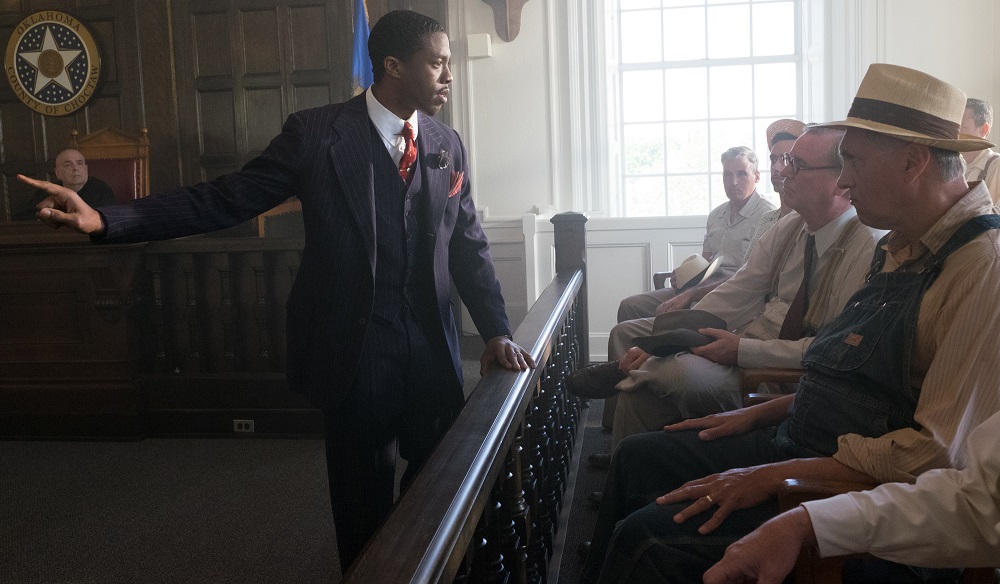 Marshall plays like a superhero origin story, which is rather ironic considering star Chadwick Boseman’s next starring role will come in Marvel’s Black Panther in February of next year. In director Reginald Hudlin’s (Boomerang) first theatrical feature since 2002’s forgettable Serving Sara, Boseman plays future Supreme Court Chief Justice Thurgood Marshall when he was just starting out as legal director of the NAACP, shuttling around the country to defend innocent African-Americans who had been falsely accused of a variety of truly unspeakable crimes. It was during these oftentimes sensationalistic cases that a judicial titan was born, each trial a building block that helped place him on the Supreme Court bench in October of 1967. 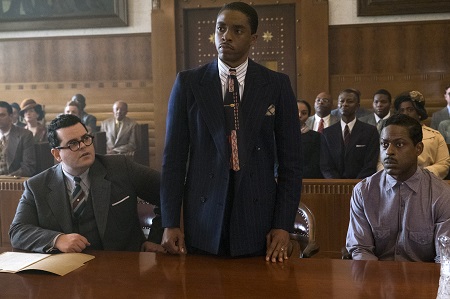 Hudlin’s movie is set in 1940 and involves a New England case where chauffeur Joseph Spell (Sterling K. Brown) is charged with the rape and attempted murder of his wealthy employer Eleanor Strubing (Kate Hudson). Professing his innocence, the NAACP sends Marshall to take charge of the case. Only problem, the judge overseeing the trial (a grizzled and cranky James Cromwell) doesn’t take kindly to big city interlopers coming into his jurisdiction telling people what to do. He’ll allow Marshall to assist in Spell’s defense, but he must not utter a word inside the courtroom. That job will be left to his client’s original attorney, befuddled insurance lawyer Sam Friedman (Josh Gad), who only agreed to be involved when he was under the impression he could turn the case over to Marshall and be done with it.

In some ways this is an odd approach to be taking with such a monumental historical figure. In others it makes perfect sense, the basic scenario as familiar as anything that a major Hollywood studio could have ever imagined. That this story has its basis in historical fact? That makes it even better. Even so, the whole thing has “formulaic” written all over it, and it’s difficult not to think watching things play themselves out towards their foregone conclusion a judicial giant the likes of Thurgood Marshall deserves a heck of a lot better.

I say this as someone who did enjoy this motion picture. Boseman and Gad are excellent. The production values are strong. Hudlin directs with more conviction and confidence than I can ever remember him displaying in his previous efforts. There are some terrific supporting performances from the likes of Brown, Hudson, Cromwell and Roger Guenveur Smith (portraying NAACP executive secretary Walter White), while Dan Stevens has a fabulous time chewing the scenery as carnivorous District Attorney Loren Willis, the man hiding his racism and anti-Semitism behind a preternaturally grinning façade that’s about as welcoming as the Big Bad Wolf hungrily eyeing one of the Three Little Pigs. Jacob and Michael Koskoff’s script doesn’t soften a lot of this story’s crueler edges (Spell isn’t exactly a saint), while the pre-WWII setting also adds an extra layer of future dread I found properly unsettling.

But why make a movie about Thurgood Marshall when Thurgood Marshall is barely your main character? If this is going to be an origin story, why not spend a little more time showing how his activism, how his commitment to the cause and to the NAACP shaped his relationship to wife Buster (Keesha Sharp), hopefully in a manner that is far less nondescript than the ones showcased here? Other than an impassioned monologue delivered to Friedman as some sort of strange, we-have-more-in-common-than-you-might-think call to action, why do we never learn more about what led Marshall to become this tireless crusader?

These questions and more kept popping up throughout the film. Thing is, whenever Hudlin and his writers took the story out of the courtroom, I did find myself increasingly intrigued with how Marshall and Friedman were interacting with one another. Their conversations have a naturalistic, easygoing patter that feels authentic, and even when things turn towards being moderately preachy and slightly didactic it was still hard not to be drawn into their evolving relationship more and more as events progressed. Boseman and Gad have surprisingly strong chemistry, and watching them begin to find common ground as their mutual love for the law and thirst for justice takes hold is suitably invigorating. 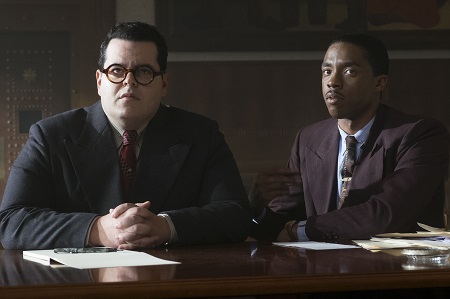 It’s a pity that the scenes inside the courtroom aren’t nearly as magnetic. Not that they’re bad, ineptly plotted or inadequately staged. It’s all fine, Hudson’s performance as Eleanor while she is on the stand, doing her best to maintain her composure as Friedman and Marshall conspire collectively to craftily undermine everything she says, particularly outstanding. The problem is we’ve seen all of this before. Witness for the Prosecution, Anatomy of a Murder or A Few Good Men this film is not, these courtroom sequences playing out more like scenes from an episode of “Law & Order” or deleted excerpts from A Time to Kill or The Client more than they do anything else.

Look, I like Marshall. As much as I enjoyed Boomerang back in 1992, there’s no question in my mind that this is the best film Hudlin has ever directed, and to say he’s improved as a filmmaker over these past two-plus decades is a colossal understatement. But that does not change my feelings that this movie could have been, maybe should have been, so much more than it actually is. Thurgood Marshall is an American hero deserving of having his full story told in a manner that feels like it has more to do with him than it does the other people he randomly encountered during his 21 years working with the NAACP. By all means, see this film. Just make sure to learn more about the great man at its center as soon as possible after you exit the theatre. 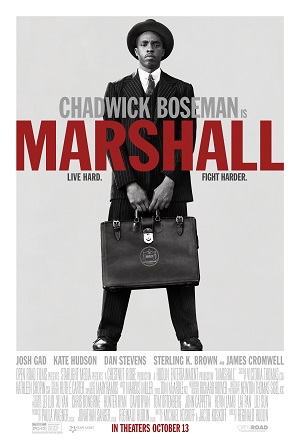