Tired of working for their cantankerous small town crime lord boss Shelton (Jonny Burgh), dimwitted best friends John (Anton Tenet) and Gaz (Arlo Gibson) rob a new Chinese antique shop thinking they’ll keep the cash and go into business for themselves. During the robbery John nabs a nifty bracelet thinking it is nothing more than a kooky trinket, the clerk warning him to leave it with him otherwise he’ll be back begging the elderly gentleman to take it off of his hands.

After being betrayed to Shelton by Gaz, John is aghast to discover his life is in danger as his former boss now wants him dead for having the temerity to think he could go into business for himself. Additionally, it turns out the antique shop was a front for a Chinese triad and they’ve given him until the next morning to return the money he stole or otherwise they’ll do lethal harm to those he cares about. This leads the thief to learn why the knickknack came with such an ominous warning. Turns out the bracelet is a time travel device that allows John to move backwards a few minutes into the past whenever he presses a hidden button, a new version of himself created with each use. Thing is, if he ever interacts with himself a vicious Chinese demon will begin stalking each new John to gorge itself upon, meaning no matter how many Johns there are none of them are allowed to get to know one another otherwise all of them will be catastrophically doomed to become a carnivorous creature’s lunch.

Don’t stress yourself out if that sounds like baloney. In the case of New Zealand import Mega Time Squad it’s best to just go with the flow and let the quirky charms of this bizarre little gross-out supernatural crime comedy to work their magical spell and not worry too much that the majority of writer/direct Tim van Dammen’s purposefully odd motion picture doesn’t make a lot of sense. The whole thing is a rather lackadaisical adventure centered around a lovable loser who learns by spending time with multiple versions of himself what is most important in life and tries to stop being so greedily self-centered. It’s plenty of goofy merriment filled with shocking moments of extreme gore and instances of sincere selflessness both of which frequently took me by surprise. While not altogether an essential piece of low budget B-grade entertainment that doesn’t make it any less entertaining, van Dammen’s handling of it all having far more pugnacious pizzazz than I initially anticipated it was going to offer up.

All of which means John does end up meeting himself after he realizes just what is happening each time he uses the bracelet, consequences be damned. More, once he learns what might happen if he keeps interacting and making plans with himself, he still continues to do so thinking that if enough Johns join forces it doesn’t matter what outside forces, whether they be demonic or they be any of Shelton’s goons, will attempt to do him in. John thinks he’s stronger together with his selves, that each version of him can watch the backs of all of the others, and if something truly heinous does happen, one of him can always bounce back in time to set it all back straight. 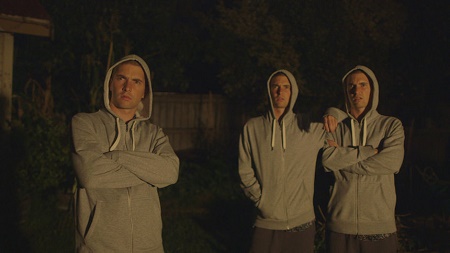 Makes sense, right? Of course it doesn’t, but that’s all part of the genre stew that van Dammen has cooked up for the audience to enjoy. There are a series of bungled robberies, dueling gangs fighting for supremacy (one lorded over by Shelton as if he was a college track coach barking out orders to disinterested athletes; the other composed of multiple Johns learning how to get along with one another) and a mysterious demon out to satiate its hunger for blood, all of which saunter through the movie with a laissez-faire fortitude that’s inexplicably glorious. There’s also an endearing friendship-slash-romance between the original John (at least I think it’s the original John; quite purposefully it’s never entirely clear as far that is concerned) and Shelton’s matter-of-fact, down to earth sister Kelly (Hetty Gaskell-Hahn), watching it play itself out to conclusion a heartfelt joy.

I’m not going to say Mega Time Squad is some great masterpiece that goes beyond its meager low budget roots and becomes some sort of eccentrically comedic science fiction masterpiece. It’s too thin, too pleased with its own warmhearted absurdity and ridiculously earnest tomfoolery for that to be the case. But van Dammen thankfully holds true to the rules of this world as far as he crafts them early on, and while I’d need to watch the film again to be certain I can’t say I feel like he breaks any of them after they’ve been explained. He also gets a wonderfully screwball star turn out of Tenet that fits things nicely, the way the actor manages to craft such a winningly complicated performance while playing scenes against multiple versions of himself impressive. The movie’s a lot of fun, this nutty little New Zealand effort a gonzo charmer I hope people take the time to see. 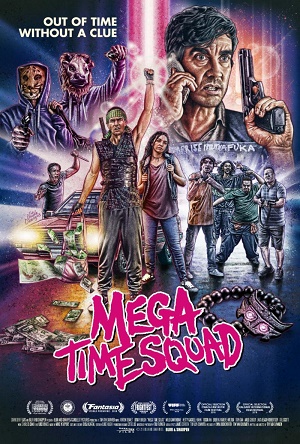