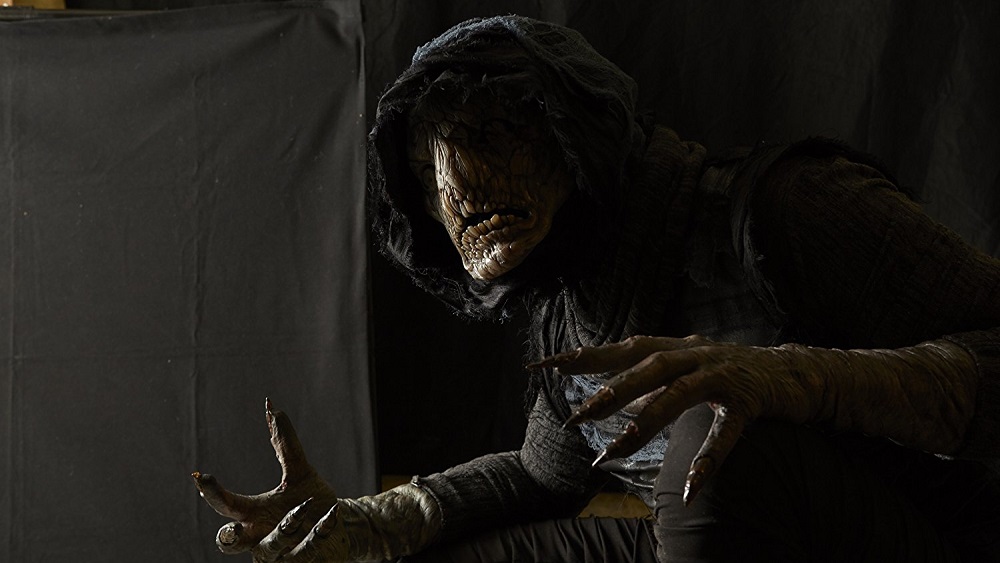 While taking care of her psychologically deteriorating grandmother Anna (Lin Shaye), the well-meaning and kindhearted Alex (Gabrielle Haugh) discovers a bizarre, hand-written children’s game hidden inside a ratty old shoebox stuffed in the bottom a trunk stored deep in the furthest recesses of the attic. It’s a silly little piece of paper outlining the rules for summoning someone, or some thing, known as “The Midnight Man,” and with the support of her best friend Miles (Grayson Gabriel) the young woman decides they should play.

But after Anna freaks out over their discovery and a weirdly vague warning from family physician Dr. Goodberry (Robert Englund) to be careful, the two begin to wonder if they’re making the right decision by choosing to play. Nonetheless, as the ticking of the evening clock continues unabated, Alex and Miles follow the steps necessary to summon The Midnight Man, never believing that a demonic game of hide and seek will subsequently ensue. Worse, their visiting friend Kelly (Emily Haine) unexpectedly drops by and also decides to play, all three of them now being chased by a supernatural force determined to feast on their souls.

A remake of a 2013 production from Irish filmmaker Rob Kennedy, writer/director Travis Zariwny’s The Midnight Man is a serious step up from his previous two motion pictures, the inane shot-by-shot remake of Cabin Fever and rancid home invasion slasher film Intruder. It’s stylistically far more interesting than those previous motion pictures, the story revolving around an intriguing supernatural entity that’s potentially a nasty little trickster just as apt to use subterfuge and intelligence against its intended victim as it is brute, murderous force. And yet, this horror opus still manages to be a maddening waste of time, things building to an annoying and deeply unacceptable climax that’s nothing short of terrible.

A key problem is that the preliminary setup is inexcusably stupid. Alex and Miles find a supposed game where, in order to play, you have to write your name down on a piece of paper along with including a drop of blood. If that isn’t creepy enough, the rules for avoiding The Midnight Man are decidedly sinister, and anyone with even a modicum of a good sense would read through them and have instant second thoughts about participating. Finally, after the pair do decide to play only to quickly come to the conclusion they’ve made a terrifying mistake, Kelly walks into this mess and immediately decides to add her name, and blood, to the participant list even though both of her friends are practically in tears urging her not to.

Even so, Zariwny manages to set a suitably uncomfortable mood, making Anna’s large secluded house an additional character essential in determining whether or not Alex, Miles and Kelly end up surviving the evening. Gavin Kelly’s (The Dry Land) ominous cinematography moves in and out of these shadowy interiors with creepy conviction, deftly allowing Melanie Rein’s (Scavengers) ominous production design to do the majority of the heavy lifting for him. As such, Zariwny is able to craft an atmosphere of encroaching doom that’s initially blood-curdling, and even though I knew Alex should have had better sense than to play the game, I was still intrigued enough by what was happening and with how this demon was going to stalk its prey I was willing to give some of these apparent missteps a pass.

But the overarching foolishness grows increasingly tiresome, and even though The Midnight Man is given a menacing introduction (the creature design is superb), the rules for what it is exactly he can and cannot do are so nebulous and vague they might as well not even exist. Does he only use the game player’s worst fears against them? Is he an ephemeral entity that can influence what is happening but can’t actually physically interact with those he is toying with? Does he have to possess former players with his spirit in order to trick newcomers into playing? Or is he a literal manifestation who can maim, injure and kill whenever he wants to, dispatching his opponents with the flick of a wrist if he so desires? Zariwny’s script is never clear on the matter, and as such what The Midnight Man can and cannot do is continually in doubt from the first second he makes an appearance. 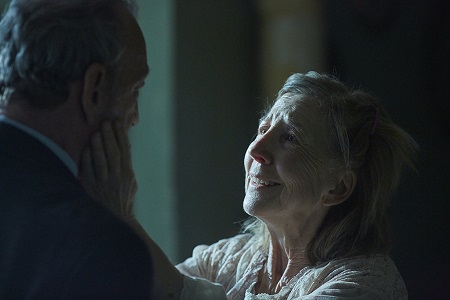 The prologue featuring Anna as a little girl playing the game for the first time is admittedly kind of glorious, the bloody brutality of the violence and mayhem the director chooses to unleash right out of the gate unexpectedly impressive. Zariwny shows a refusal to pull a single punch, one explosive mutilation catching me completely by surprise. He also allows Shaye the freedom to go as wild and as manic as she wants to, the actress most known for her controlled, emotionally- resolute performances in the Insidious films so energetically over-the-top it’s like she’s some sort of Tex Avery cartoon version of herself and not an actual flesh and blood human being.

Unfortunately none of this matters. The ending is unintentionally laughable, so repellent its makes every bit of action that happened during the prior 80 minutes pointless. Zariwny seems to love showing a disdain for his audience by crafting climaxes that are so sadistically abhorrent he might as well be making snuff films and not low budget exploitation horror efforts. It’s all so inexcusably heinous and insultingly idiotic I was aghast just how bad the final moments proved to be. For all its potential, as imaginatively creative as the creature design might be, The Midnight Man isn’t any good, watching it a tedious game of disappointment and frustration I wish I hadn’t played. 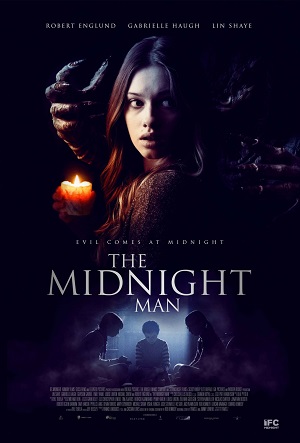