On the way home from a workplace New Year’s Eve party, young married couple Lindsey (Alex Essoe) and Jeff (Dylan McTee) accidentally run into a man stumbling down the road. At first intending to speed him to the hospital, after it appears he has died in the back seat of their car the decision is made to take him back to their house and report the accident to the police after they’ve both had time to sober up. But this man isn’t who he appeared to be, and he’s just unconscious, not dead, Lindsey’s little sister Hannah (Perla Haney-Jardine) inadvertently making even more of a bloody mess out of the situation when she finds him in the garage.

The next morning, after the police make an inquiry, going on their way believing the couple struck a deer, Jeff and Hannah head out to investigate a note they found in this mysterious man’s pocket. While they are away, Lindsey is visited by a sinister, furtively friendly stranger calling himself “Detective Smith” (Ward Horton). But a law enforcement officer he most definitely is not, his reasons for being in the house having everything to do with a missing $50,000 he thinks is hidden somewhere on the premises. But there’s still more to the story and Lindsey’s not sure who she can trust, the intelligent woman determined to put the puzzle pieces together before it is too late.

The absorbing Midnighters is a nicely constructed modern noir where jealousy and greed collide and only those who manage to stay true to their core beliefs even have a passing chance of surviving into the next say. Moving at breakneck speed yet never feeling unduly frenetic or unfocused, director Julius Ramsay and his screenwriter brother Alston Ramsay have done a fine job crafting an absorbing, character-driven suspense flick that only grows in intensity as it builds to a conclusion. I liked this little movie one heck of a lot, watching this violent, luridly sensationalistic thriller far more of an invigorating joy than I imagined it was going to be beforehand.

Granted, other than Lindsey, a potential viewer has to be okay spending 90 or so minutes with a group of characters who are hardly the nicest people a random traveler is ever likely to meet. It’s apparent long before the accident that Jeff isn’t the best guy in the world. He covets his wife’s position at the bank something fierce, resenting the fact she’s, not only more successful than he is, but likely so much so he’ll never come close to matching (let alone exceeding) her at any time in the foreseeable future. He’s a backward thinking misogynistic moron who barely comprehends just how sexist and repulsive these hidden beliefs are, the thought of so much easy money bringing unspoken desires out into the open in a manner they’ve never been broadcast before.

Hannah is a bit more nuanced. She’s a mixed-up youngster who feels as if she’s been consistently buried underneath her big sister’s massive shadow, so when she finds comfort and solace in the arms of someone who hardly has her best interests at heart this turn of events isn’t exactly surprising. What is unexpected is just how far she is willing to fall in order to prove to Lindsay she’s more than a messed-up kid who can’t do a single thing for herself, pieces of her soul eroding away to nothingness as she continues forward on this misbegotten path.

All of which means things get pretty ugly as events cascade downhill towards their tragically violent conclusion. Smith is more than willing to use both physical and psychological means to find the missing money, sometimes both at once, the threat of gruesome bodily harm a verbal weapon he appears to take great pride in wielding. But Jeff is almost equally apt to utilize similar methods if given the opportunity, and as answers to some of the more mysterious questions are acquired it becomes equally clear Lindsey and Hannah’s lives don’t mean near as much to him as they undeniably should. There is a nascent nasty streak running through the story that’s as hard-boiled as it is cutthroat, and it’s easy to imagine golden age stars of yesterday like Dana Andrews, Ida Lupino, Gloria Grahame or Richard Widmark in any of the central roles the two Ramsay bothers have created to reside within this particular moralistic cinematic quagmire.

Not that any of the cast members likely deserve to be mentioned in the same breath as those noir heavyweights. Maybe Essoe. She unsurprisingly gives the standout performance. While not achieving the same sort of complicated unsettling brilliance she managed with her spellbinding turn in 2014’s Starry Eyes, the actress is still exceptional as. I could see the wheels turning inside her head as she tried to figure out what was going on, while the growing horror gnawing at her soul becomes more and more pronounced as she unhappily comes to the dreadful conclusion Jeff isn’t nearly the thoughtful and caring man she thought she had originally married. Essoe is the real deal, and I cannot help but hope she’s given bigger and bolder opportunities to shine in the very near future.

As for the other three, Horton comes of the best, his wickedly unsettling grin sending so many chills down my spine just the thought of it now as I write this review is enough to make me shudder. Haney-Jardine, a long way from the samurai-loving B.B. of Kill Bill: Vol. 2, does what she can with her role. But Hannah is written rather schizophrenically, and at a certain point it’s clear she’s more of a device to get Jeff and Lindsey where they need to be instead of a fully fleshed-out human being deserving of the viewer’s empathy. However, what the film ultimately does with the character is something of a moderate shock, the minimalistic terror of what transpires as it pertains to the youngster absolutely bloodcurdling.

McTee overplays his hand, making Jeff a mildly annoying ass right from the first moment we’re introduced to him. I’m also still not entirely certain I’m happy with the story’s conclusion, the last scene forcing me to look at one of the characters in a brand new way that didn’t feel nearly as authentic as every other facet of their journey to that particular point proved to be. It’s a rather obvious twist that, while still clever, had the unfortunate side effect of sending me away from the movie on something of a slightly sour note.

Still, I’m really high on this film. This is a thrilling noir that takes no prisoners and pulls no punches. The Ramsay brothers have crafted something invigorating for their feature-length debut, the subtle nuances of the plot mechanics consistently engaging. With Essoe’s performance proving to be a thing of complex, emotionally-shattering beauty, even if every element might not work out exactly as I hoped they were going to I was still impressed with their feature, Midnighters a tasty bit of pulp fiction I’m certainly going to be revisiting relatively soon. 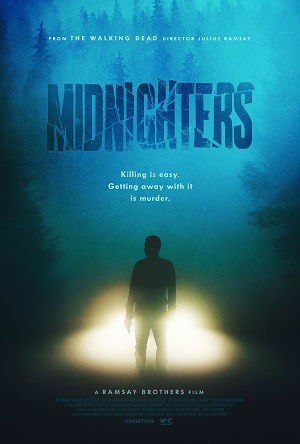