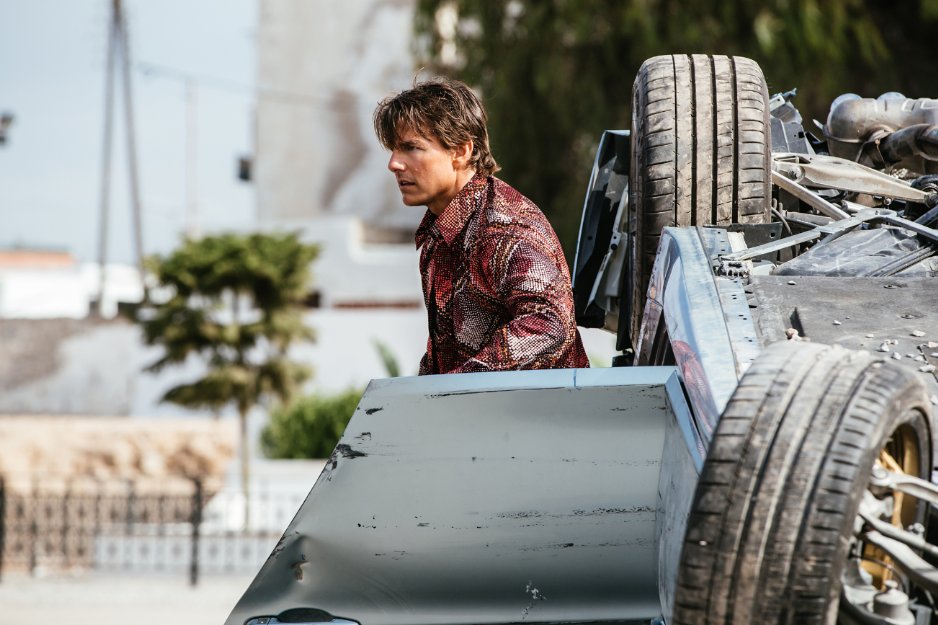 “Hunt is uniquely trained and highly motivated – a specialist without equal – immune to any countermeasures. There is no secret he cannot extract, no security he cannot breach, no person he cannot become. He has most likely anticipated this very conversation and is waiting to strike in whatever direction we move. Sir, Hunt is the living manifestation of destiny – and he has made you his mission.” 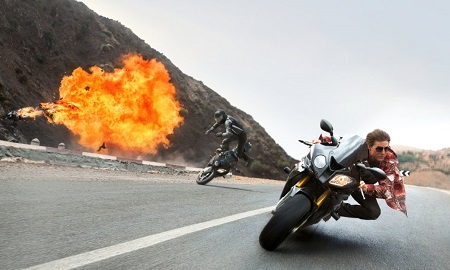 “The Impossible Mission Force (IMF) has been disbanded. CIA Director Hunley (Alec Baldwin) has made the case the unit is a dinosaur, a relic of an age gone by, its methods and its tactics causing more harm than good. William Brandt (Jeremy Renner) fought the good fight, sticking up for his fellow agents as only he could, but with so many secrets unanswered and cases unfinished this was a losing battle from the start, especially with the biggest question of them all remaining a puzzling mystery: Where is Ethan Hunt (Tom Cruise)?

The fifth entry in the popular spy vs. spy series of action spectaculars, Mission: Impossible – Rogue Nation is a relentless thriller that ends up being marvelously entertaining even if many of its signature moments and beats feel in some way repeats of events from the preceding motion pictures. Once again the IMF agents find themselves the targets of baseless accusations of conspiracy and treason. Once again they’re facing off against an impersonal Eurotrash villain (this time played by veteran Brit character actor Sean Harris). Once again Cruise does a number of his own incredible stunts making one wonder more than a little about the Hollywood superstar’s sanity.

And it works, oftentimes stunningly, the script by director Christopher McQuarrie (Jack Reacher), from a story co-written with Drew Pearce (Iron Man 3), a tightly wound menagerie of double, triple, quadruple, heck even quintuple-crosses that never loses sight of the bigger picture. Things are layered beautifully, playfully, scenes joining one to the other with delectably intimate precision that’s extraordinary. More than that, the film itself is impressively self-contained, and by the time the mic was dropped and all the evil oozing through the proceedings was wheeled out as if trapped in a shiny glass box I was grinning ear-to-ear.

The central plot mechanics revolve around Hunt’s belief that a shadow organization known as The Syndicate is responsible for acts of terror around the globe. Working on his own, he finds himself drawn to the enigmatic Isla (Rebecca Ferguson), the one woman who can confirm the international organization’s existence. But as to which side she’s actually on, that’s anyone’s guess, Ethan both saved from being interrogated by a thug going by the nickname “Bonecrusher” (Jens Hultén) by her only to later find the spy assisting in a convoluted assassination plot.

That’s essentially the movie in a nutshell. Ethan runs down Isla, she either saves his life or puts him danger, fellow former IMF agents Brandt, Benji Dunn (Simon Pegg) and Luther Stickell (Ving Rhames) playing catch-up as they follow their friend’s trail, assisting him in his duties when they can, all before Hunley wrongly does them all in. Rinse. Repeat. Do it again. And again. And again. And once more, if only just for good measure.

Along the way McQuarrie stages a number of crackerjack set pieces, not the least of which is the much talked about pre-credits assault on an A-400 military transport plane where Cruise dangles precariously off the side during an actual liftoff. In many ways, even more impressive is a daringly clever Hitchcock riff (think The Man Who Knew Too Much) at the Vienna Opera House, the nuts and bolts of the sequence giddily rhapsodic. There’s also a stupendous motorcycle sequence on the Casablanca highway (you can’t have a main character named Isla and not end up in Casablanca) even if it does recall a much too similar showcase featured in Mission: Impossible II.

There is a reliance on coincidence that’s a little annoying, while another big underwater sequence never feels as tense or as terrifying as it should have even with Cruise doing much of it himself. Also, Harris isn’t a particularly compelling villain, both Baldwin and Simon McBurney (as Hunley’s British MI6 counterpart) making more of an imprint in limited screen time than the guy everyone is chasing frustratingly does. Finally, there’s a truly terrible car crash sequence that utilizes some of the most glaringly inept CGI of any film this summer, an unintentionally laughable hiccup that risibly stands out for all the wrong reasons. 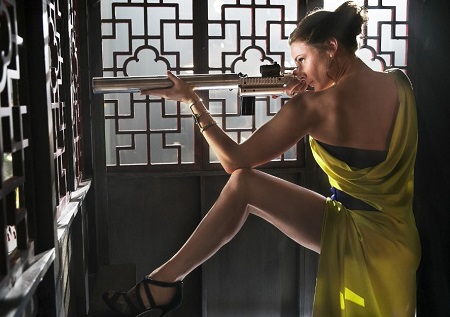 But Cruise is as good as ever, while Ferguson successfully, and magnetically, navigates the interior machinations of a character whose motivations and desires are seldom, if ever, clear. Additionally, the film’s 131 minute running time seems to fly by in the blink of an eye, McQuarrie traveling from one action sequence to the next with confident aplomb. Rogue Nation isn’t the best entry in the Mission: Impossible series, the fourth chapter Ghost Protocol still holds that distinction, but it’s still pretty darn good, proving keeping the fuse lit on this franchise is as excellent an idea as producer and star Cruise has had at any point in his hugely successful career.”

Rebecca Ferguson is a star, plain and simple, and Tom Cruise’s fearlessness is still a sight to behold. But, truth be told? Rogue Nation doesn’t play near as well the second time around as it did the first. Still very entertaining. Still a good time. Just not nearly as rewatchable as the last two Mission: Impossible adventures have proven to be, and I’d be awfully remiss if I didn’t take a second or two to point that out.

Audio Commentary with director Christopher McQuarrie and actor Tom Cruise – While not as engaging as their track for Jack Reacher, this is still a strong, informative and engaging commentary fans of the series owe it to themselves to listen to.

Lighting the Fuse (5:57) – More with McQuarrie, mostly talking about how he came aboard the project, working again with Cruise and designing some of the film’s more complex stunt sequences.

Heroes… (8:06) Brandt, Luther, Benji and even Isla all get their own character profiles; strictly by-the-numbers.

Cruising Altitude (8:23) – A look at the opening stunt. Outstanding stuff.

Sand Theft Auto (5:35) – A look at the high-speed car and motorcycle chases. Not nearly as outstanding, but still pretty terrific.

The Missions Continue (7:08) – The cast and crew wax poetic on way this series has endured (as well as where it potentially could go from here).

There’s still a ton of life in Tom Cruise’s action-packed espionage baby, especially with him all willing to throw himself around like an indestructible ragdoll doing a great deal of the craziest, most death-defying stuff himself. But ideas are running a little short in this outing, and as fun as it might be – and it’s a LOT of fun – Mission: Impossible – Rogue Nation still falls a little short of the series’ last two outings. All that said, Paramount’s Blu-ray presentation is immaculate, and fans are urged to snatch the disc up right away. 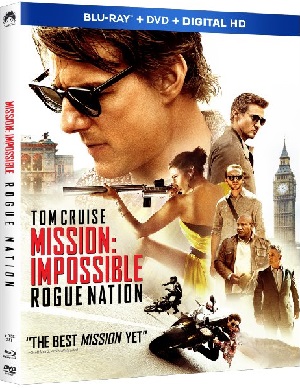