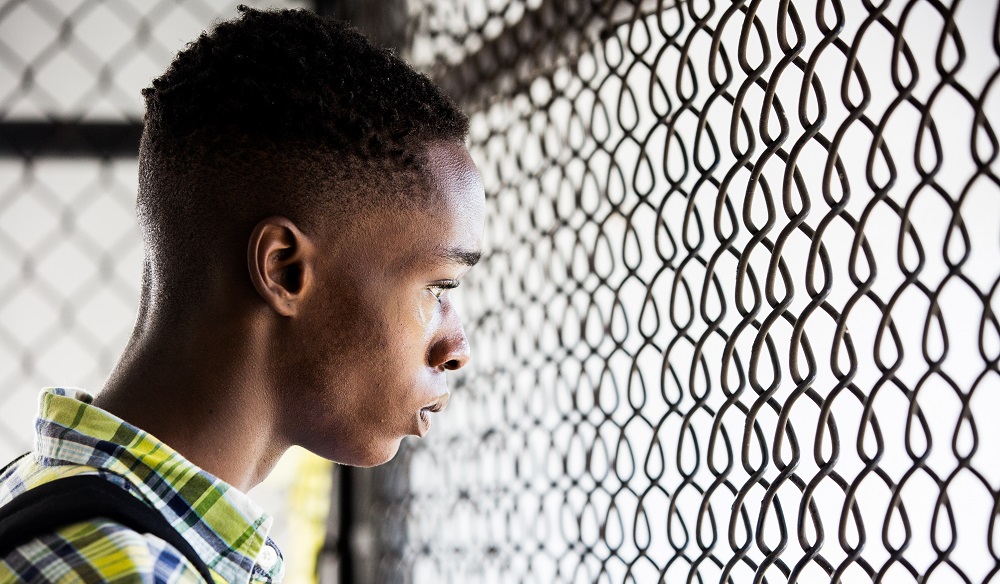 Youngster Chiron (Alex Hibbert), also known as “Little,” is being chased through a seedy section of a dilapidated Miami neighborhood by a number of fellow classmates looking to rough him up. Ducking into an empty crack house to hide, he is ultimately rescued by of all people the quietly authoritative drug dealer Juan (Mahershala Ali). Later, the pair strike up a delicate father-son bond, one that is looked at with knowing wariness by Little’s secretive mother Paula (Naomie Harris), yet also one the single parent doesn’t goes out of her way to vehemently discourage, either. 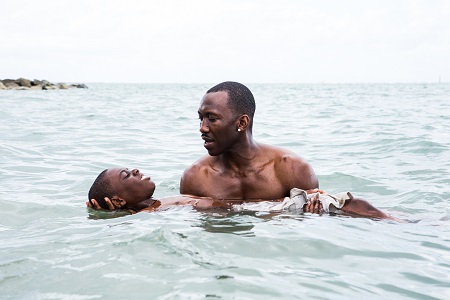 Now in high school, Little (Ashton Sanders) continues to try and navigate his way to adulthood. Paula kicks him out of their small apartment on a regular basis so she can feed her growing drug addiction, while a number of the kids who bullied him in elementary school have only grown more aggressively nasty now that they’re all teenagers. Little finds solace in the home of Teresa (Janelle Monáe), Juan’s former girlfriend, the kindly woman happy to help him find sanity amidst the chaotic travails of his life no matter how awful things might on the surface appear.

Years later as an adult, know on Atlanta streets by the nickname Black, Chiron (Trevante Rhodes) makes his living supervising young street dealers much in the same way Juan used to almost two decades prior back in the old neighborhood. Out of the blue, he receives a phone call from childhood best friend Kevin (André Holland), and on a whim makes the decision to drive to Miami for an impromptu visit. On the way, he stops at a treatment facility to check in on Paula, verifying she’s continuing to stay clean and sober even though sitting at the same table with his mother dredges up a number of painful memories that are difficult for him to revisit.

Moonlight is a masterpiece. I don’t normally like to make pronouncements like that during a film’s initial release, as the only real way to measure a motion picture’s staying power and lasting imprint on the cinematic landscape is to see how it marinates over the period of decade or so. But in the case of writer/director Barry Jenkins’ (Medicine for Melancholy) sophomore feature, I find it close to impossible not to proclaim is an almost instant classic, this study of masculinity, race, gender, poverty, addiction and sexual identity a stunning, emotionally flabbergasting triumph.

It’s hard to know where to begin. The opening section looking at Chiron as a child is instantaneously immersive, and I found myself slipping right into the boy’s shoes with remarkable ease. Jenkins has an uncanny ability to make his story universal for every viewer even though the experience of the characters as they attempt to navigate their way through this Miami world is strikingly authentic. But while I can never know what it was like to be an African American child growing up with crack-addicted single mother, watching him search for truth, trying to figure out his place in the world, seeing Chiron reach for role models who can help him learn more, all of that I could relate to. The director has an uncanny ability to not overplay his hand, subtly setting the stage for Chiron’s future evolutions in ways that are dynamic, invigorating and pure.

Things move with deliberate grace from there, Chiron still dealing with many of the same obstacles as a teen as he was forced to face head-on as a boy. What’s intriguing is how unapologetically Jenkins treats the circumstances that help shape his protagonist, showing how the road before him has numerous turn-offs, some leading to salvation and others going in the exact opposite direction. But the majority lie in an uneasy grey area filled with various obstacles, and it is here Chiron finds himself, constantly trying to figure out if the road ahead will get any easier or if he should turn back around and start over again as close to beginning as he can.

Jenkins’ script, based on a story by Tarell Alvin McCraney, weaves a fascinating web. Juan isn’t a role model, but he also isn’t a demon, the richness of his compassion in direct juxtaposition with the life he lives and the way he is able to earn the money that allows him to sit in relative comfort alongside Teresa. Paula isn’t a stereotype, her battles with addiction sitting in direct opposition with her love for her son, the two in a constant battle for supremacy that produces horrifying collateral damage as they do so. Kevin understands Chiron better than he knows, his attempts to discover himself no less complex and terrifying. Yet even when their friendship becomes intimate, the dangers of perception and peer pressure are continually present, the choices the two make as children and teenagers having unforeseen consequences that follow them well into adulthood.

The acting is stellar, especially as it pertains to Ali, Harris and, somewhat surprisingly, Monáe, the popular pop star making the transition to the screen with ease. Harris, the only one present at all three stages of Chiron’s journey, is particularly stunning, bringing substantive depth to a character who in theory should be so unlikable finding a single reason to care about her should be impossible. Yet, somehow the veteran character actress maneuvers her way through things with shocking conviction, revealing not only layers hidden beneath her own character’s skin, but also the one portrayed by Hibbert, Sanders and Rhodes at various stages of Chiron’s life as well. 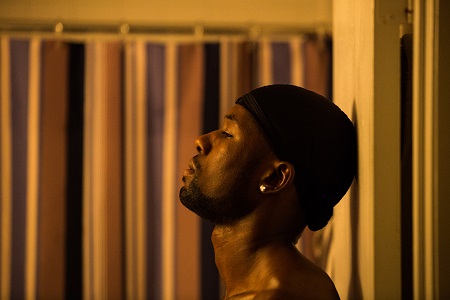 As for those three actors who play the main character, each leaves an indelible mark. Hibbert’s quiet intensity is beguiling, a climactic smile as he revels in learning how to swim absolutely earth shattering. For Sanders, he has a number of signature moments, chief of which is a late night beachside chat that allows him to process longings and needs he’s gone out of his way to try and suppress. As for Rhodes, I could watch him sitting in that diner, layer by layer shedding his street thug persona to reveal the still searching boy underneath, for hours, the actor’s deeply passionate, almost effortless ability to say so much without seeming to utter a word close to extraordinary.

Moonlight could be compared to a lot of different films, Jenkins’ opus recalling works from filmmakers as varied as Richard Linklater, François Truffaut, Fernando Meirelles, Cheryl Dunye and Spike Lee. But, in the end, the director makes this motion picture its own uniquely satisfying enterprise, and while the influence of others is felt his imaginative take on the material is never in doubt at any point. Jenkins delivers a cinematic experience that is as satisfying as it is unique; the truths laid bare ones viewers of every race, gender and sexual identity owe it to themselves to take notice of. 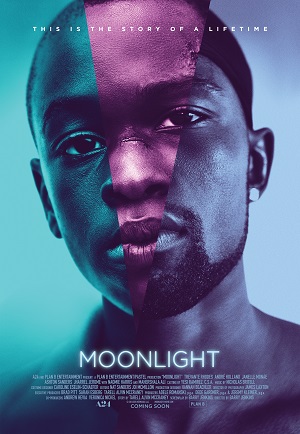