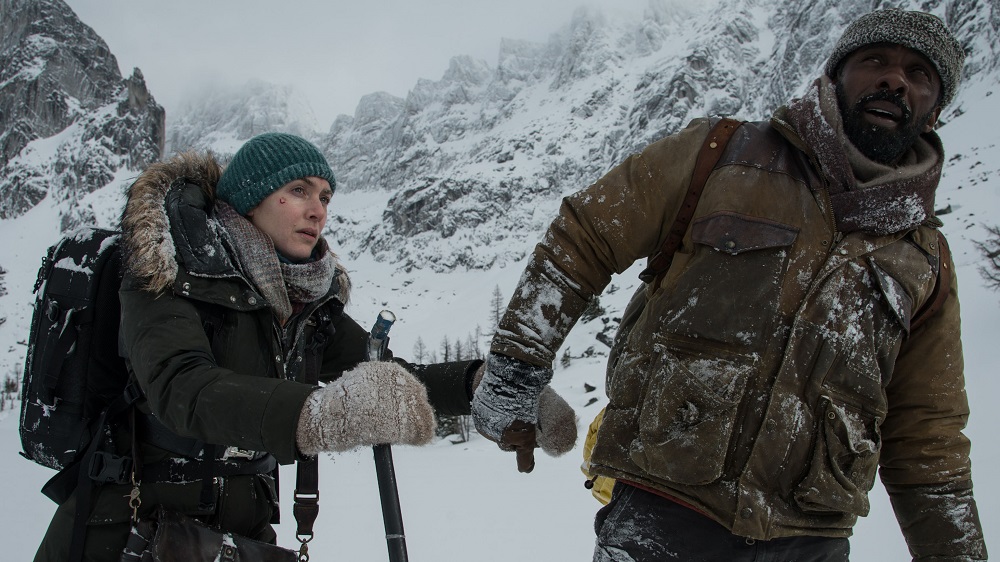 Thanks to a massive snowstorm about to hit the region, photojournalist Alex Martin (Kate Winslet) and neurosurgeon Ben Bass (Idris Elba) are stranded at a nondescript Idaho airport even though they simply must get to their respective destinations by morning. She’s getting married. He’s got an important surgery. Even though they’re complete strangers, a combination of panic and need leads them to pool resources and charter a plane flown by the charming Walter (Beau Bridges), the affable pilot more than happy to get them to Denver and the airport there before the storm makes flying anywhere at all out of Idaho impossible. 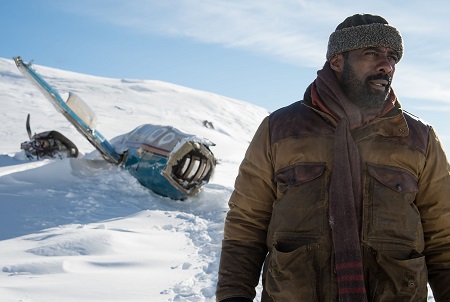 After a horrible in-flight accident having nothing to do with the weather downs the plane, Alex and Ben awaken in the freezing cold to discover they’ve crashed on the side of a mountain, no hints of civilization to be found. At first they make the most of the situation, sheltering in the ruined carcass of the aircraft. But after a few days it becomes apparent help isn’t coming. Even though Alex’s leg is horribly injured, Ben doing the best he can to patch her up with the materials available at the crash site, the pair set off down the side of the mountain hoping they’ll find help.

Based on the best-selling novel by Charles Martin, the romantic survival disaster melodrama The Mountain Between us features two exceptional actors elevating subpar material to place where the resultant motion picture could almost be considered worthwhile. Working from a script written by Chris Weitz (Cinderella) and J. Mills Goodloe (The Age of Adaline), acclaimed director Hany Abu-Assad (Paradise Now, Omar) does what he can to authentically ground things in a compellingly visceral realism that might overshadow the more melodramatic elements not-so-subtly hidden inside the story. His crisp handling, coupled with the confidently assured performances of Winslet and Elba, is almost enough to save the day, and if not for a limp, unintentionally hysterical final act there would likely be something surprisingly powerful to talk about here.

But this is not the case. Once Alex and Ben get down off of the mountain and descend into the perilous snow-covered forests below, this tale takes a decidedly syrupy turn that the movie cannot recover from. Things that were subtly developed are suddenly spelled out in bright flashy neon, both characters doing and saying things that have been completely outside of what was established during the story’s first two-thirds. It ends up playing like a third-rate Harlequin Romance Novel from the 1980s more than it does anything else, the majority of the goodwill generated by the opening acts lost with a speed that’s frustratingly astonishing.

Pity, because for a while there I was fascinated by what Abu-Assad and the screenwriters were choosing to show me, so much of this story filled with richly compelling nuances that held me anxiously spellbound. The opening plane crash is stunning, as are the scenes immediately afterwards with Ben awakening to discover Alex perilously injured, their few supplies strewn about who knows where out in the snow and absolutely no way to call for help. His only sentient companion turns out to be Walter’s beloved pet, an excitable dog that doesn’t seem to care for him at all, the freezing surgeon constantly giving the animal a grizzled glare almost as if he’s wondering what he needs to do to get the canine to warm up to him. 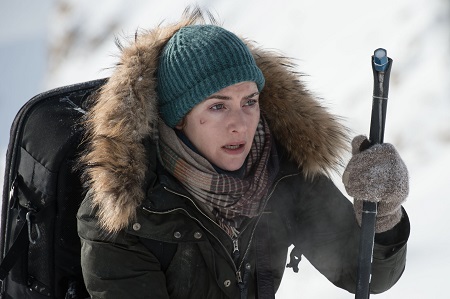 Both Winslet and Elba are wonderful. They slip into the roles with ease, the chemistry oozing off of them hot enough to accelerate global warming to its catastrophic breaking point all by itself. Winslet, in particular, is a model of strength and resilience, yet at the same time still does a superb job of making the paralyzing fear bubbling just underneath her character’s surface resonate without it becoming overpowering. I loved just about everything the Oscar-winner was doing here, and even when the film transitions into maudlin, puerile banality there was still something about the actress’ work that kept me curious to discover what she was going to do next.

Even so, when air gets let out of this balloon the result comes close to being catastrophic. The movie transitions from being some erstwhile combination of The Edge, The Revenant and Alive (sans cannibalism, of course) to emulating some old Hollywood weepy from the 1940s or ‘50s. But where films like An Affair to Remember, Old Acquaintance, Brief Encounter, Written on the Wind or Humoresque could be broad and bold with their overripe emotions in large part thanks to the inherent theatricality of their respective stories, in a yarn that’s supposed to be as realistic as this one those elements are nothing short of facile. Much like the plane crash that begins this particular tale, The Mountain Between Us bangs into the side of a metaphorical cliff leaving all kinds of wreckage in its wake, the fact any elements worth extolling the virtues of survived at all something of a minor miracle. 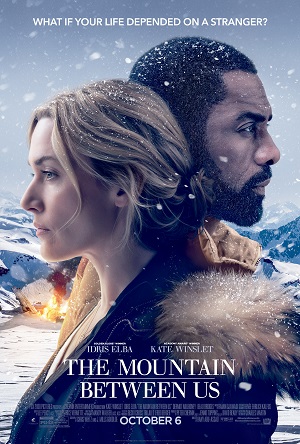