For as worthless as Narcopolis proves to be, it should be said that rarely for any of its briskly paced 96-minute running time did I find myself wanting to look away from the screen. Writer/director Justin Trefgarne’s feature-length debut managed to hold my attention almost in spite of itself, and while the storytelling could be a heck of a lot better the cinematic trickery bubbling throughout is somewhat impressive. There’s something going on here I found intriguing, and with this in mind I can then forgive a handful of the film’s more obvious shortcomings. 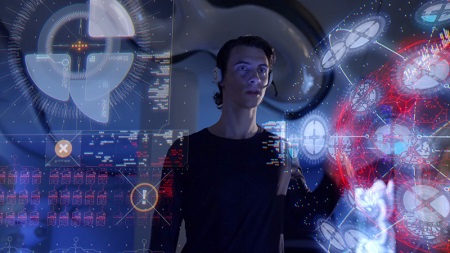 In the world of 2024, Great Britain has legalized recreational drug use, but only those products pharmaceutically manufactured like those by industry giant Ambro. Detective Frank Grieves (Elliot Cowan) is investigating the mysterious death of an unidentified man in the middle of a rundown section of the city. It appears he was using a new drug, one not in the system and that causes the corpse to self-immolate around the eye area. He also encounters Eva Gray (Elodie Yung), a young woman apparently under the influence of this substance yet has also somehow managed to not succumb to its more lethal aftereffects.

Under pressure from the Ambro Corporation, Grieves’ superiors want him to drop the case and handover the girl. Instead, he’s compelled to dive even further down this particular rabbit hole, following the fiery trail to reclusive former scientist Dr. Sidorov (Jonathan Pryce). Yet his explanations don’t make any sense, his cryptic meanderings sending Grieves back to the home of his estranged wife Angie (Molly Gaisford) and their inquisitive son Ben (Louis Trefgarne), discovering truths two decades removed from anything ordinary.

Trefgame’s script uses H.G. Wells’ The Time Machine as an important plot point, that nugget of information in and of itself more than enough to let anyone watching know where things are ultimately heading. But the fact the filmmaker begins things in 2044 with a frenetic, nonsensical prologue doesn’t help, erasing much of the mystery fueling this puzzle box thus making the detective’s quest less  impactful. The filmmaker also references everything from Kiss Me Deadly, to Blade Runner, to Traffic, to Se7en, and as notable as this might be it frustratingly keeps the film from developing an identity it could call its own.

It’s not helpful that the villains are instantly forgettable, almost as if they stepped out of a straight-to-video Christopher Lambert actioner from the mid-to-late 1990s like Adrenalin: Fear the Rush, Resurrection or Beowulf, all movies I’d hazard to guess Trefgarne would rather not have his debut compared to. But the plot mechanics are so rudimentary they’re almost laughable, the inherent contrivances and incongruities relating to time travel getting more and more annoying as events progress towards their not-so-shocking conclusion.

Same time, other than a pointless detour into a nightclub that game me an instant headache thanks to the thumping music, obnoxious editing and strobing lighting techniques, the director still manages to craft an atmosphere reveling in the unknown and all it can potentially conceal that’s palpable throughout. The increasing paranoia, the way Grieves’ mental state is in constant flux, I liked all of that immensely, and on that front Trefgarne does manage to craft a sci-fi noir worthy of at least a passing glance.

But not one any more lasting than that. Narcopolis never rises above mediocre as far as story is concerned, building to a supposedly slam-bang stunner of a finish that’s nowhere near as inspired as I think the director intends it to be. While Cowan is a solid Dana Andrews meet Harrison Ford clone, his performance alone isn’t enough to make up for the structural silliness of the plot itself, and while Trefgarne shows promise behind the camera his skills as a screenwriter sadly still leave something to be desired. 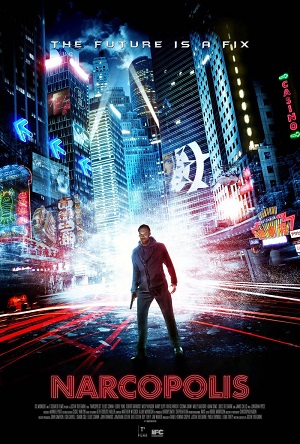