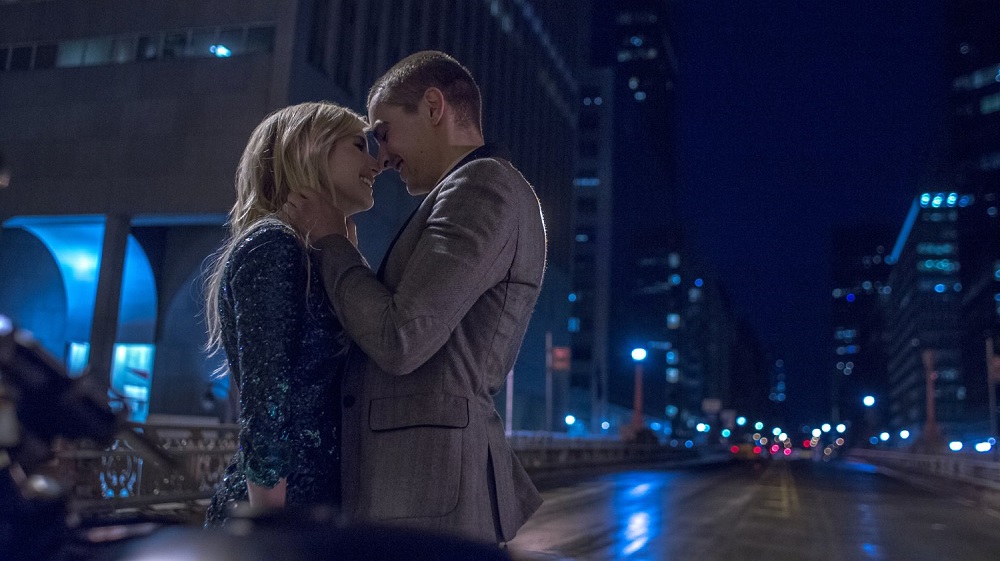 A pair of headstrong young adults (Emma Roberts, Dave Franco) play an online, social media, real world variation on Truth or Dare and quickly end up over their heads, realizing the stakes go beyond winning or losing to the point their very lives are now in jeopardy. 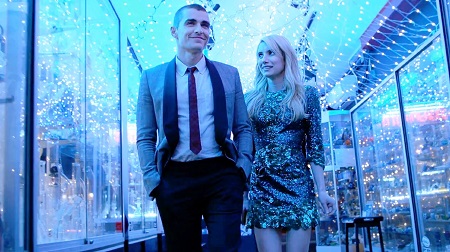 “On the verge of graduation, Venus ‘Vee’ Delmonico (Emma Roberts) dreams of leaving Staten Island to attend college at a prestigious art school in California. But with little money to pay the tuition, not to mention an overprotective mother, Nancy (Juliette Lewis), still grieving over the loss of Vee’s older brother barely a year prior, the 18-year-old is going to have to put those aspirations on hold. She’ll attend a local college and continue to live at home, not wanting to risk revealing her desires to her mom for fear doing so will only lead to tears, heartbreak and anger.

Yet a person can only take so much before they push back against the forces cast against them. When her outgoing, vivacious best friend Sydney (Emily Meade) jabs one too many times, Vee does the unthinkable, signing up to play a crazy, probably illegal one-of-a-kind online game called Nerve. A variation on Truth or Dare, users who decide to get involved in the action can win money by completing tasks set forth by them by the watchers. But what initially starts out as playful fun mixed with a little bit of joyful rebellion quickly turns into a sinister fight for survival, Vee and another fellow player, the mysterious if handsome Ian (Dave Franco), forced to team together if they hope to escape Nerve’s sinister grasp and continue with their lives with even an ounce of freedom.

I want to like Nerve, I really do. Franco is as charming as ever, the young actors portraying Vee’s friends, most notably Meade and ‘Parenthood’ star Miles Heizer, are excellent, and the direction by Catfish and Paranormal Activity 3 filmmakers Henry Joost and Ariel Schulman is suitably energetic. Additionally, screenwriter Jessica Sharzer’s (‘American Horror Story’) adaptation of Jeanne Ryan’s best-selling novel is spunky and charming, setting up the story quite nicely as it puts the building blocks in place for all the craziness and danger certain to transpire. Best of all, Roberts is wonderful, delivering one of her better performances as she navigates through the emotional complexities inherent to her character’s journey, and as such it was exceedingly easy to care for Vee and hope she’d find a way to dig herself out of the hole she suddenly finds herself trapped within.

But while the first half of the movie is a giddy good time, at a certain point the inherent implausibility fueling things begins to take its toll. Once the nefarious nature of Nerve is revealed, at the point Vee discovers just how terrible her situation is, the fun has ebbed away to the point absurdity is all that remains. On top of that, the way things are resolved is boringly absurd, the supposed moralistic statement that I believe all involved are going for unintentionally laughable when push finally comes to shove. The payoff simply does not work, the accusations being levied against those watching the game, and thus the viewers taking in the movie as well, packing about as big a punch as a feather being wielded by a three-month-old infant.

For a little while, though, Nerve is something moderately special. The early portions depicting Vee’s insecurities, how they are coupled with her aspirations to pursue her artistic talents, those are wonderful. Better is the way they are juxtaposed with her relationship with Nancy, this mother’s emotional smothering of her beloved daughter completely understandable considering the mutual loss both have endured. All of this sets up the character perfectly, so when she decides to become a player in this not-so-harmless game I couldn’t help but root for her to cut loose, have some fun and discover that interior resolve others seem to see yet she herself stubbornly refuses to embrace.

Joost and Schulman keep the pace moving full speed ahead, and even when the narrative begins to spiral hopelessly out of control the pair still manage to craft a fair amount of kinetic intensity that’s absolutely undeniable. But while they’ve studied the Michael Mann meets David Fincher meets Nicolas Winding Refn playbook cover-to-cover, their combined filmmaking bravado just isn’t enough to cover up the story’s more readily apparent shortcomings. The lunacy of it all, the way events play themselves out, no matter how glorious it all looks or how rapidly things are paced that doesn’t lessen the stupidity of it all a single ounce. The plan Vee and her conspirators concoct is too inane to take seriously, and as such the central point is relegated moot, the power of the climactic reveal lessened to the point of insignificance.

In many ways, Nerve reminds me of an online, social media version of 1997’s The Game merged with other ‘80s and ‘90s teenage throwbacks as varied as Cloak & Dagger, Wargames, Gotcha! and Hackers, that initially mentioned Michael Douglas/Sean Peen surrealistic thriller most of all. Yet where that Fincher favorite crafted an otherworldly dreamscape planted firmly between the lands of fantasy and reality that allowed for its inherent implausibility to be diminished, this never happens as far as Joost and Schulman’s latest is concerned. As nice as certain components might be, as solid as the performances universally are, the movie simply doesn’t work, making it just another cinematic missed opportunity residing in a summertime multiplex already overflowing in them.”

It should be noted that Nerve worked better for me at home than it ever did in the theatre. At the same time, that last 30 minutes is still tough to get through, while the climax itself is a total unsatisfying mess that just gets worse the more I think about it. Roberts and Franco are good, and Joost and Schulman certainly stage a number of terrific sequences, but the whole thing collapses under its own weight as things wind their way towards conclusion, making the film a missed opportunity that’s an occasionally inspired time-passer but sadly nothing more than that.

Extras here include (and can be accessed by selecting either “Watcher” or “Player” options):

“Watcher” menu allows access to 17 short interviews with the cast and crew listed under their online @ handles. It’s a little messy, but most of the interviews, while freakishly short, are still pretty solid. Fans of the film will likely get a kick out of this.

“Player” menus is a lot more straightforward, presenting three fairly interesting interactive items for viewers to toy with (“The Players,” “Do You Have the Nerve?” and “Are You a Watcher or a Player?”). The middle one, the “Do You Have the Nerve?” game, is probably the most enjoyable, but all three have their plusses, and do showcase that the minds who put this Blu-ray together were at least thinking somewhat outside of the box.

A Digital HD Copy and a DVD version of the film is included with this release.

Nerve doesn’t work, but it does have a number of solid moments, while Roberts delivers one of the better performances of her still young career. Lionsgate’s Blu-ray presentation is solid across the board, and I seriously doubt fans will be even moderately disappointed if they choose to add the title to their personal libraries. 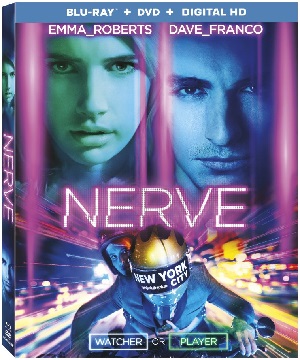