Never Rarely Sometimes Always slapped me in the face. Hard. With purpose. So forceful it left a mark. Writer/director Eliza Hittman’s (Beach Rats) latest drama is a stunning tour de force of introspective restraint and breathless honesty that couples its fury at societal inequities with an openhearted empathetic grace that left me stunned speechless once it had concluded.

This is a magnificent piece of culturally observational storytelling that is purposefully raw in its depictions of female friendships in the face of extreme physical and emotional crisis. The silent solidarity that exists between best friends and cousins Autumn (Sidney Flanigan) and Skylar (Talia Ryder) as they navigate the crowded streets and subways of a large city unlike any they’ve ever set foot in before is realized with breathtaking tenderness. Their mutual connection is the beating heart that pumps blood through this film’s veins, the three days and two nights they’re forced to endure wandering around this strange, chaotic urban jungle soberly unforgettable.

Autumn is 17-years-old. She is a high school senior living in a small Pennsylvania town where not much happens and community resources, especially those for women, are noticeably scarce. Worried she might be pregnant, Autumn braves going to one of the few pregnancy centers open to her even though she’s relatively certain they’re not going to be helpful or answer many of her more difficult questions.

All of her fears are realized when her pregnancy test comes back positive and a later sonogram confirms those results. While she’d like to get an abortion, because she’s still underage any clinic that performs the procedure would have to inform Autumn’s parents, and for reasons personal to her and her alone this is something she’d like to avoid. Instead, she and her cousin Skylar secretly buy a pair of bus tickets, cross state lines and head to New York City for what they assume will be a one-day trip.

This isn’t what happens. Hittman doesn’t play things safe and she doesn’t make things easy for either of her two main characters. For reasons best discovered while watching the film, Autumn and Skylar end up staying overnight in the Big Apple for far longer than they anticipated and without the financial resources to secure a hotel room. While their bond is tested under conditions so extreme they border on unfathomable, I never felt it was in danger of breaking. Their story is universal in its resilience, complexity and meditative compassion, this journey going places even the hardest hearts will have difficulty not being moved by.

There is a striking resemblance to Romanian director Cristian Mungiu’s 2007 masterpiece 4 Months, 3 Weeks and 2 Days. Both films are about two young women supporting one another when one of them secretly attempts to get an abortion. Both films show the hardships they encounter in the process. But where Mungiu’s 1980s-set story was an evisceration of policies and laws that essentially made Romanian women third-class citizens, Hittman isn’t nearly as pointedly didactic.

Even though her rage at the situation Autumn finds herself in is palpable, there is noticeable subtlety in how the filmmaker depicts the institutions and people the teenager encounters during her travails. Hittman could have thrown spears of vitriol and judgment in the direction of the Pennsylvania clinics (and those like them) her heroine first encounters. But she refuses to do this, the same going for Autumn’s obviously hardscrabble home life and with whatever might be going on at school.

This gives the director’s film a layer of thoughtful uncertainty that’s haunting. Augmenting this further is newcomer Flanigan’s fabulous, viscerally unrefined performance. She is Autumn, and whether cagily staring down the Pennsylvania clinician who is stating more propaganda than she is truth, or having her veneer of strength slowly stripped away by a New York social worker who knows just which questions to ask, the actress conveys so much potent truth by barely whispering a single word. Flanigan’s body language, her crumpled physical fragility, it’s all extraordinary, and there was never an instant where I could take my eyes off of her.

I can say the same about the entire film. Hittman’s drama is close to perfect, everything building to a cathartically exhilarating final few moments that broke my heart and healed my soul pretty much at the exact same time. Even with a slew of unresolved questions left precipitously dangling, Autumn’s story climaxes with a form of winsome sincerity that brought me to tears, Never Rarely Sometimes Always a boldly assertive triumph I won’t soon forget. 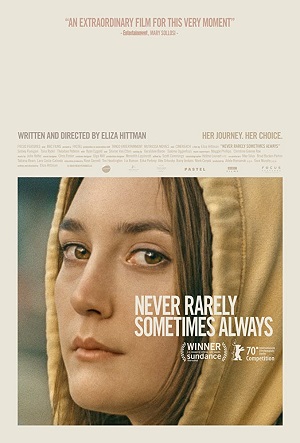