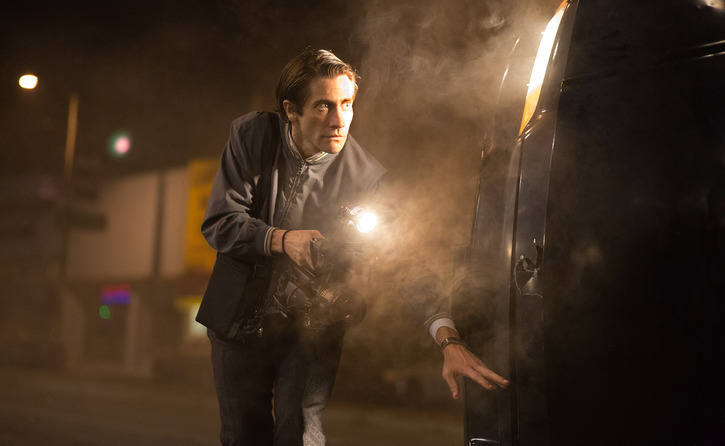 Louis Bloom (Jake Gyllenhaal) is not one to stand idly by. He’s not afraid to learn, is willing to ask questions and will do virtually anything it takes to achieve his goals. So when he comes across freelance cameraman – a “Stringer,” according to the parlance used in the television news business – Joe (Bill Paxton) in action filming an horrific car accident he knows right then this is job for him.

Fast-forward an undisclosed amount of time, Louis is the go-to guy for Los Angeles morning television news producer Nina (Rene Russo), the man so unafraid to get to the gory center of the story she’s almost beside herself in giddy anticipation every time he struts into the station. Making more money than he ever has, the young man has hired a navigator and secondary cameraman, Rick (Riz Ahmed), while also trading in his beaten down clunker of an automobile for a shiny new ride. They can be just about anywhere at the drop of the hat, listening to the police scanner with such intent you’d think their very lives depended on what was being said. 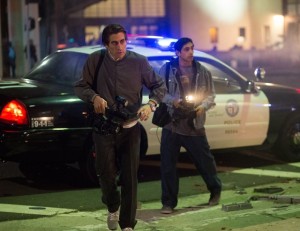 Nightcrawler wears its cynicism like a badge of honor, Louis such an abhorrent human specimen it’s immediately apparent he’s going to be willing to do whatever it takes to be the best stringer in all of L.A. If bodies at a car accident aren’t exactly where he feels they should be, he’s not above moving them around to help create a more indelible, bloodcurdling image. If he has information the police need to solve a crime, he’ll withhold it until releasing what he knows serves his best interests. He negotiates contracts with cutthroat tenacity, his conscience as bleak, black and bitter as the California nights he freely wanders within like a wolf carefully stalking its prey.

The directorial debut for writer Dan Gilroy (The Bourne Legacy, The Fall), the movie is a nasty piece of work, reveling in its character’s failings while at the same time offering up pointed satirical commentary on the sensationalistic leanings of the modern television news business. It asks tough questions while supplying almost zero answers, everything building to a decadently repugnant conclusion that’s as fitting as it is foregone. Gilroy sits the viewer in front of a mirror, daring the audience to look away if they can, knowing full well, much like a car crash on the side of the Interstate the chances most can or will do so is practically nil.

He’s got a magnificent ally in Gyllenhaal. The talented actor completely reinvents himself, Louis a serpentine chameleon who slithers and connives his way here to there doing so with cocksure certainty and stoic resilience. He bobs and weaves from one cataclysm to the next, never asking what is right or what is wrong, instead shooting away as if the only thing standing between him and success are those unlucky enough to be caught in his camera lens. No matter how disturbing or depraved an act might be, no matter how shocking a statement coming off his tongue is, I couldn’t stop watching the actor, not for a single solitary second, his go-for-broke ferocity a beautiful kind of cadaverous loathsome madness that’s extraordinary. 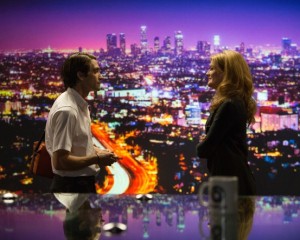 Russo comes close to matching him, her Nina virtually as cutthroat and as unscrupulous as her favorite freelancer, even though she’s not willing to admit it. She hides her unwholesome truth behind a façade of forthright sanctimoniousness she thinks keeps people from realizing just how low she’s willing to stoop to get ratings, something Louis sees through immediately. All of which makes her reactions when he unapologetically, almost emotionlessly, breaks her down to her core basics all the more astonishing, Russo’s virtually silent emotional rollercoaster rejoinders during these sequences riveting in their complex dexterity.

As great as much of this is, and at times it’s pretty darn magnificent, Gilroy’s overall thesis isn’t near as astonishing or as profound as I imagine he thinks it is. As already alluded to, there aren’t a lot of places for all of this to go, making Louis’ ultimate destination hardly a surprise, diluting the inherent shock value of the final scenes a substantial margin. The writer/director also cuts one of his primary characters a little short, and while I appreciated some of his third act decisions, and while Ahmed’s overall performance is strong, Rick remains frustratingly one-dimensional throughout, making his final declarations oddly hollow.

Be that as it may, this movie works, grabbing me by the throat in the first couple of minutes and refusing to relax its grip at any point during the remainder of its almost two-hour running time. Spectacularly shot by Robert Elswit (There Will Be Blood, The Town), confidently edited by Dan’s brother John Gilroy (Pacific Rim, Michael Clayton), there is a look and feel to the film that, while reminiscent of other L.A. neo-noirs (mainly Michael Mann’s Collateral), still achieves a tenor and an authenticity uniquely its own. Nightcrawler sticks with you like a popcorn kernel stuck in your tooth or like gum refusing to budge from the underside of your shoe, the overall picture an agreeably nauseating plunge into the sewer that is worth diving into headfirst and without a safety harness. 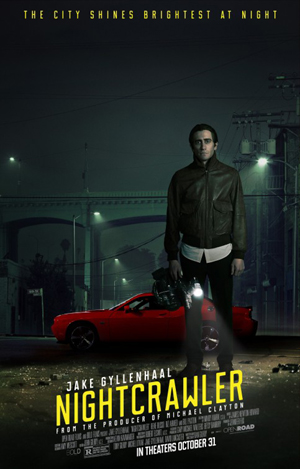