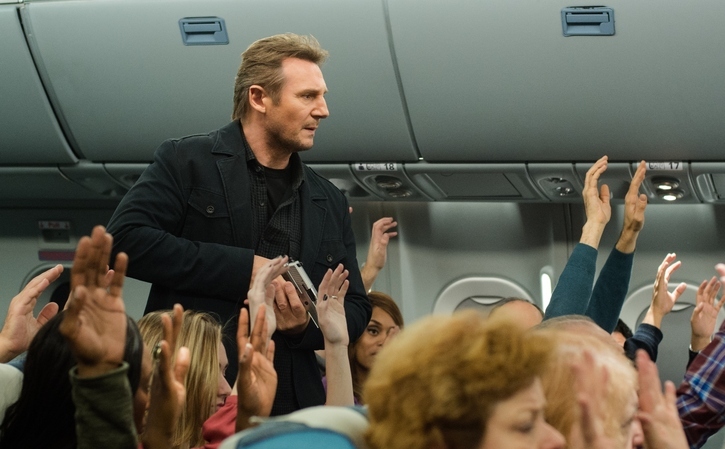 Federal Air Marshall Bill Marks (Liam Neeson) is having a bad day. He’s an alcoholic. He smokes too much. He doesn’t particularly care for his job anymore. For that matter, he doesn’t believe he’s still any good at it. The flight to London is one he doesn’t want to be on, and if he has his druthers he’s going to make sure his agency returns him back to the United States sooner rather than later.

That’s not going to cut it. Minutes into the six-plus hour flight Marks receives a text message on his secure network claiming two things: The person sending it is aboard the plane and, more importantly, they are going to kill someone every 20 minutes unless $150-million dollars is deposited into a secretive numbered account. Worse, the offender is going out of their way to frame the Marshall, impeding his progress while he attempts to ferret them out while also making him look like a terrorists to both the passengers in the air as well as his superiors on the ground. 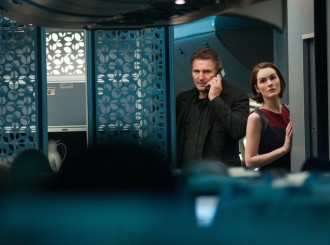 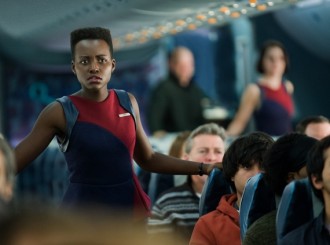 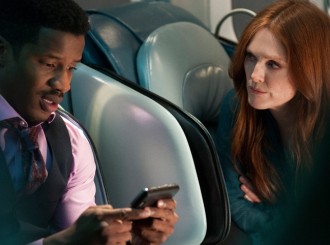 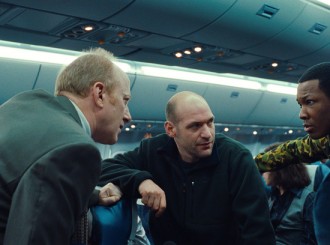 It’s not like Non-Stop wants to be more than what it is. The film is a glossy airline thriller, a bit of Executive Decision crossed with healthy doses of Taken and any random ‘ticking-clock’ suspense flick you can think of from the past 35 years. Credited to three screenwriters, directed by Neeson’s Unknown handler Jaume Collet-Serra, nothing new or unexpected happens, and while one wants to expect more discovering this just isn’t so shouldn’t come as anything akin to a massive shock.

What is, happily, is just how unabashedly entertaining the film proves to be. As rudimentary as it all is, as unsurprising as the identity of the chief villain ends up being, Collet-Serra’s handling coupled with the collective strength of the film’s cast allows things to ultimately be more fun than they have any right to be. Save for the final ten minutes of self-indulgent histrionics overall Non-Stop is a piece of B-grade high-flying silliness I’m not embarrassed to admit I enjoyed a fair amount.

It helps that the performers, save for Julianne Moore, a star as big as Neeson in her own right, are a collection of strong character actors both new and well-known. Scoot McNairy from Argo. Corey Stoll from “House of Cards.” 12 Years a Slave Oscar-nominee Lupita Nyong’o. Arbitrage scene-stealer Nate Parker. “Downton Abbey” fan-favorite Michelle Dockery. Linus Roache. Shea Whigham. Anson Mount. These are a few of the names who populate the scenery, each of them having something significant to offer even if the actions taken by their respective characters do not always come as much of a shock (or, for that matter, make a lot in the way of sense).

Neeson, while not pushing himself in the same way he did with recent performances in The Grey or Five Minutes of Heaven, knows his way around this kind of movie and this sort of role all the same and as such he slips into Marks’ persona with ease. He brings gravitas and intensity, even a third act bit of speechifying, as ludicrous and obnoxious as it might be, more rousing and emotionally invigorating than expected. The veteran goes through these motions without any excess embellishments, and while no one is giving him an Academy Award unlike his work in Clash of the Titans or Battleship there’s nothing for him to be ashamed about, either.

I’m not saying Non-Stop is great. It isn’t. But in all honesty it isn’t meant to be, its aspirations not aimed much higher than being old-school popcorn entertainment made with craftsmanship and skill. And that, in fairness, is what it is, Collet-Serra proving himself more than capable of bringing the majority of this off with few missteps. While the movie doesn’t know when to, forgive me, stop, that doesn’t make watching it any less enjoyable, and taken on its own terms this is one February release I wouldn’t begrudge anyone choosing to see one little bit. 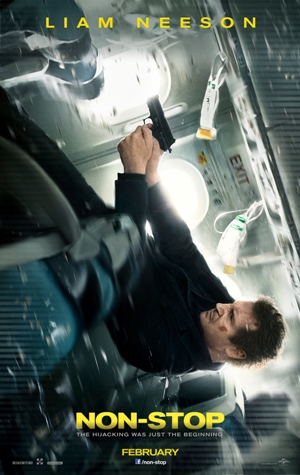